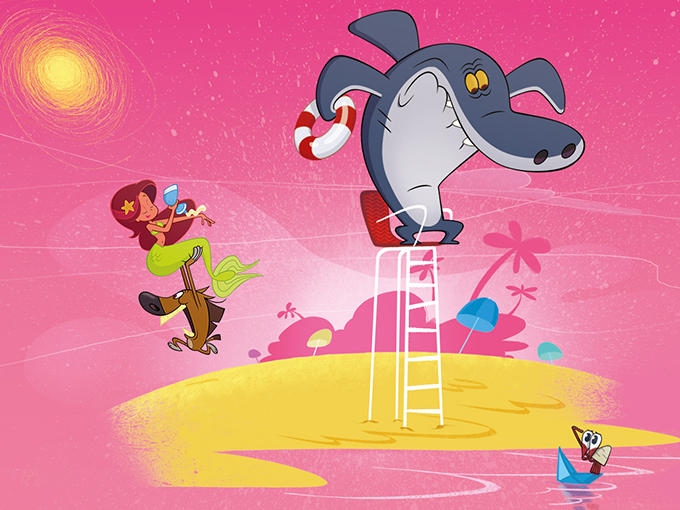 Xilam CEO talks raking in views for its toons online

Marc du Pontavice discusses the recent growth of the prodco's shows on YouTube, and what it's doing differently to reach young audiences.

Kids channels on YouTube are flourishing lately, racking up millions of subscribers and generating billions of views. For instance, Animaccord’s YouTube channel Masha and the Bear currently boasts 3.5 million subscribers, while Ryan ToysReview has a staggering 14 million. With more and more kids logging in to watch videos on YouTube, traditional producers are turning to the VOD to further their reach—and French animation producer Xilam is proving to be a stronger contender than most.

While it’s not quite up to the numbers of viral unboxing channels just yet, in recent years Xilam has been growing by leaps and bounds on the platform. In the six-month period between November 2017 to April 2018, the company reported a 79% gain in its viewership, a 126% increase in revenue and a 50% jump in subscribers compared to the same period a year earlier. Views on its YouTube channels are projected to reach close to four billion in 2018, compared to 2.6 billion in 2017. By the end of 2018, Xilam’s overall subscribers on its channels are estimated to reach five million.

The company believes choosing the right format and genres are key to its success. “Our shows are created in seven-minute formats, which is exactly what YouTube audiences are looking for,” says Marc du Pontavice, Xilam’s CEO. “We also belong to a genre of universal comedy, meaning we have a cross-generational appeal that ensures that we reach both kids and adults.”

Aiming to reach global viewers, the prodco also experiments with how it approaches marketing and distribution, such as increasing brand awareness on social media outlets like Facebook and Instagram.

“We go with the test-and-learn approach,” says du Pontavice. “We are continually testing new stuff like format, content and cross-promotion. This direct business-to-consumer approach is an incredible opportunity, and new to us in terms of marketing.”

The company also recognizes that children engage with YouTube content differently from other platforms, and is using that to its benefit.

“Kids have very different viewing patterns and expectations on digital platforms. Viewers like to come and go, and when you have a short format, it gives you a very strong advantage,” says du Pontavice. “Our goal is to extend this by adapting our TV episodes for this new audience and channel.”

In addition to its shows being shorter than traditional kids cartoons, Xilam benefits from an extensive catalog of previous content. With more than 2,000 animated episodes and three feature films in its library, including popular series such as Mr. Magoo and Space Goofs, these older shows have been given a second life thanks to YouTube, according to du Pontavice.

However, while other Xilam channels have anywhere from 1,900 to 72,000 subscribers, it’s the Oggy and the Cockroaches and Zig & Sharko (pictured) channels that have experienced the most growth, with 1.9 million and 1.4 million subscribers respectively.

“The fact that Oggy and the Cockroaches and Zig & Sharko are non-dialog shows certainly helps the global appeal of the brands, especially on YouTube,” says du Pontavice. “There are no language barriers, and they are accessible to children of all ages.”

For Xilam, YouTube’s status as an alternative to traditional children’s TV is proving to be profitable. “We introduced the Zig and Sharko content into the US market on YouTube, rather than with a broadcast partner, and thanks to cross-promotion with the Oggy and the Cockroaches’ YouTube channel and search engine optimization, Zig & Sharko soon established a solid audience.” This has lead to solid returns for the brand, as the official Zig & Sharko channel now generates 45% of its YouTube revenues from the US.

As for the future, Xilam continues to push forward with five new series, while releasing a host of library content. A new original series is also currently in development, with the hopes of launching early next year.