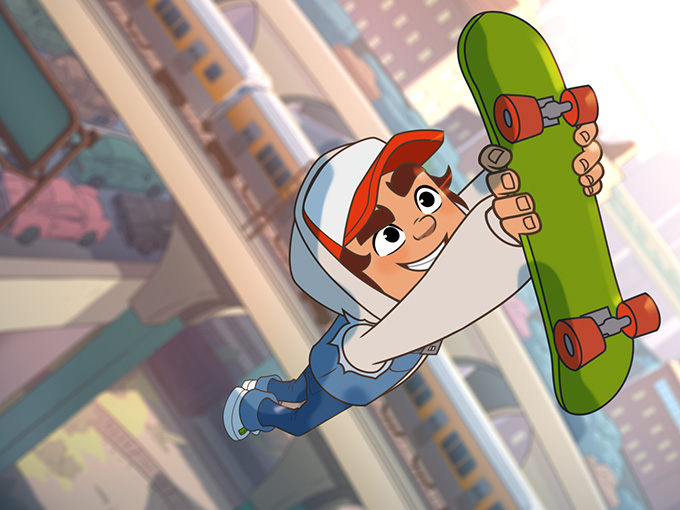 Record-breaking mobile app property Subway Surfers, from Copenhagen’s SYBO Games, is set to drop in at California’s iconic Venice Beach Skate Park tomorrow in celebration of the IP’s animated series debut on YouTube, its newest game update and the launch of a limited-edition Vans collection from SUBSURF, the game’s first licensed brand.

On June 1, Subway Surfers’ YouTube channel will premiere the first episode of a new 10 x four-minute, 2D-animated series of the same name, made in partnership with Canada’s DHX Media and Denmark-based CGI-animation house Wil Film.

The latest version of the Subway Surfers game will also launch on the day, with lead characters Jake, Tricky and Fresh landing in Venice Beach for the first time. To date, the characters have visited more than 43 destinations around the world for unique local rides.

Since debuting in 2012 by SYBO and Danish publisher Kiloo, the hybrid action/endless runner game has been a global phenomenon, generating more than 400 million downloads last year alone, reaching one billion downloads on Google Play earlier this year (becoming the first game to ever to do so), and breaking the two-billion download mark across iOS and Android just yesterday.

For industry veteran Sander Schwartz (Skylanders Academy, Teen Titans), who joined SYBO as a freelance producer in 2016 to help develop the short- and long-form series before becoming head of animation six months later, June 1 marks the hard work and coming together of a key group of like-minded creators, animators, producers, writers, directors and licensing experts.

“We’ve worked very hard with the creators to get the tone and vision right for the DNA of the characters and the world in which they live,” says Schwartz.

Before the game, SYBO founder and president Bodie Jahn-Mulliner alongside additional founder and CCO Sylvester Rishøj created an animated short in 2009 about a rebellious character who graffitis a railway station while escaping a grouchy inspector and his dog. Once the app took off, development for a 26 x 13-minute animated TV series was announced in 2013.

“The YouTube series is a proof of concept of the long-form show that we’re going to produce and ultimately launch in late 2019,” says Schwartz.

For the short-form Subway Surfers, Brent Friedman (Star Wars Rebels, Star Wars: The Clone Wars) and Francesca Marie Smith (Hey Arnold!) were brought on board as head writers with Schwartz producing, DHX Media as a producing partner and Wil Film on post-production duties.

Intended for kids, teens and co-viewing audiences, the series features standalone episodes set in one location, Subway City, providing character studies of the game’s lead personalities and their friends.

“The series sets up the long-form series, which will introduce a mystery twist and more locations. It’s like Gravity Falls meets Stranger Things for kids,” says Schwartz.

He adds that the rest of the short episodes are currently in various stages of production. All of the eps are expected to be completed this summer, but their launch dates on YouTube are yet to be determined. In terms of distribution, Schwartz says the series may be a YouTube exclusive for a certain period of time. “We are currently in discussions on a first window with YouTube, then later on, it will be pushed out to other online platforms,” he says.

Schwartz notes that the project’s biggest challenges involved finding a look that was unique yet very recognizable to the brand, and figuring out how to assemble the pipeline across multiple cities in different countries.

“I think we’ve been very successful in creating a distinct style, and we really pushed the envelope in terms of 2D and Harmony animation. We worked with several Canadian studios to get the right team together that could deliver the quality we wanted to achieve, but ultimately chose DHX, who had a really excellent comedy team coming off another show,” he says.

The core animation team for the show is currently working out of DHX Media’s Vancouver studio, while Off Model Pictures’ Chris Bartleman was hired as a supervising director based in Toronto. Michael Hegner, meanwhile, who has worked on feature films and many LEGO animated series, was brought on as director for the show’s small pre-production team in Copenhagen.

A first look of the animated series can be viewed here.