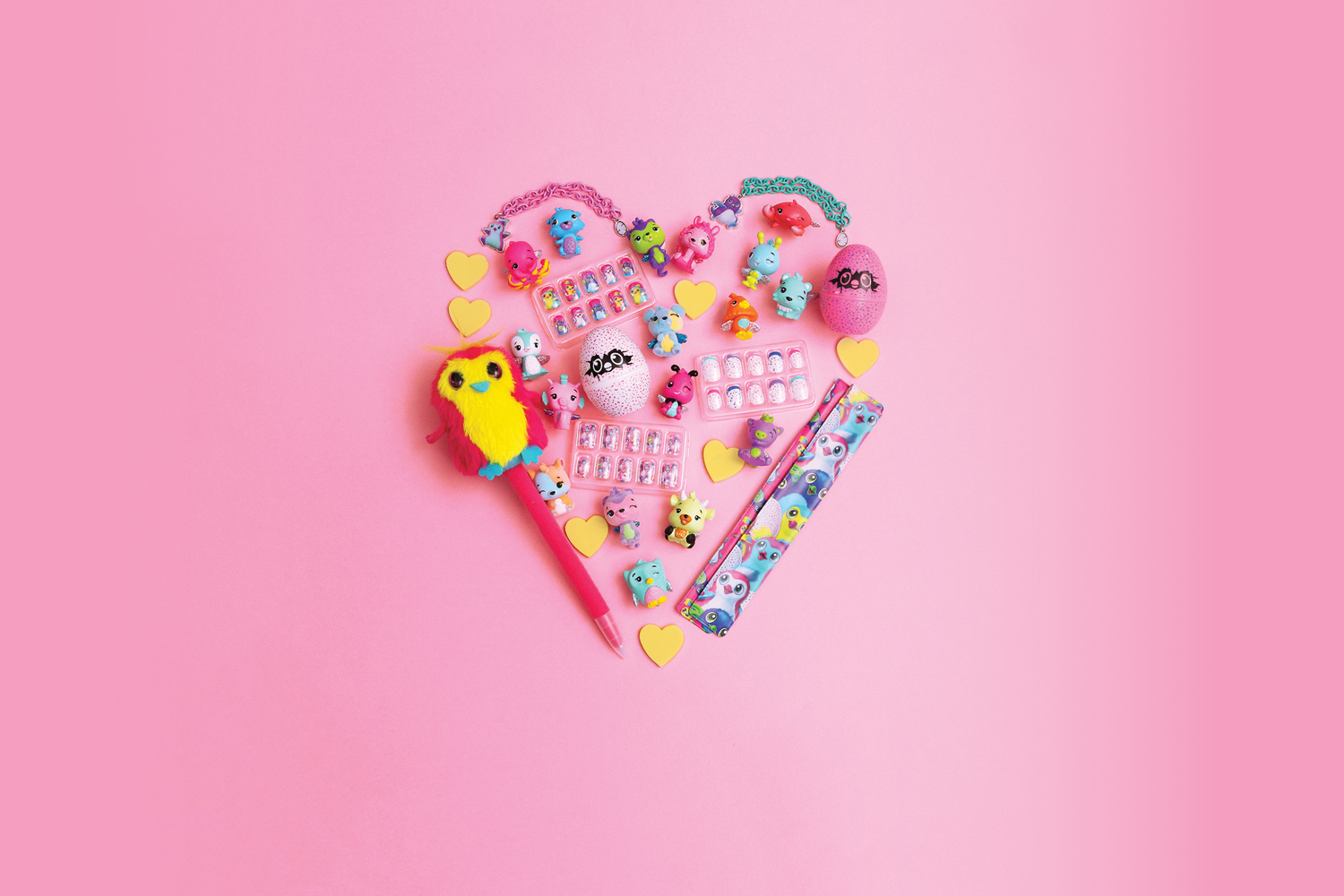 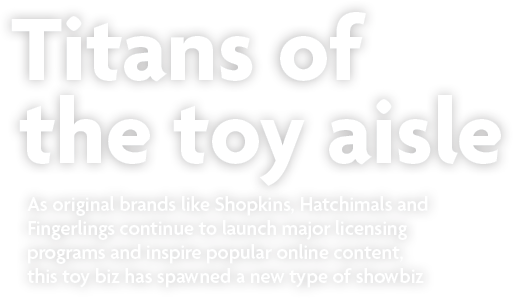 Titans of the toy aisle

As original brands like Shopkins, Hatchimals and Fingerlings continue to launch major licensing programs and inspire popular online content, an industry-wide survey reveals how this toy biz has spawned a new type of showbiz.

Superhero figurines, branded race cars and dress-up dolls have long been mighty stalwarts of the toy industry, but one should never underestimate the strength of a Hatchimals shell. Completely original playthings like Spin Master’s 2016 breakout hit are filling shelves—and parents’ shopping carts—as interest in movie-driven items continues to wane. With BMO Capital Markets recently dropping its growth estimate for the US toy industry in the wake of an underperforming market for film-focused consumer products, it seems that original toys are the new blockbusters, launching comprehensive licensing programs that can hold their own against those of once-upon-a-time Hollywood heavy-hitters.

There’s proof in the slow-rise foam pudding. Within a week of their August 2017 US debut, WowWee’s Fingerlings monkeys had sold 100,000 units, while Spin Master’s revenue increased by 22% to US$475 million in Q3 2016, following the launch of its Hatchimals products. And in its first year on shelves after launching in 2014, Moose Toys’ Shopkins saw 660% growth. Slow-rise foam toys like Soft’n Slo Squishies, meanwhile, are showing just how quickly a trend can take over the social media stratosphere. Original properties like these are giving the industry an idea of just how much power (and creativity) can come from a single concept, so what’s the secret to their newfound success?

Spin Master’s Hatchimals became a phenomenon almost immediately after cracking into the toy aisle in October 2016. So it wasn’t long before Spin Master was hatching plans for a robust licensing program inspired by the toy—essentially an interactive egg that kids nurture to reveal colorful creatures inside. “Within two or three weeks, we knew we had something special,” says Jonathan Mirsky, Spin Master’s senior licensing manager. “We wanted to seek out all of the appropriate partners and potential licensees, and they were pitching us as quickly as we could pitch them.”

Spin Master wanted to be measured in its approach to building out a licensing program to avoid the brand fatigue or drop in quality often associated with a licensing blitz. Because Hatchimals is an original toy brand (and not built on an underlying mythology), the company decided the foundation of its licensing efforts would be storytelling.

“Building the lore of the Hatchimals and where they come from was incredibly important,” says Kate Frostad, global franchise director of Hatchimals. “The moment we decided to have something other than a chick or a duckling hatch out of our eggs, we knew we needed storytelling to support the brand.”

Anticipating this need for narrative, the company inked an agreement with Penguin Random House in advance of the toy launch. Spin Master has since incorporated the brand’s mythology into subsequent Hatchimals products, up to and including the packaging. The Hatchimals Colleggtibles line, for example, features a map of Hatchtopia on the back of the collectors’ sheet.

“We’re going to be telling even more stories on a larger scale,” she says. “You can do this through snackable webisodic content, publishing or a mobile app.”

Spin Master says it will also continue to incorporate storytelling into its licensed products. The first wave of licensing agreements focused on softlines, and now the company is expanding into secondary categories like health and beauty, outdoor, activities and confectionery. According to Spin Master’s fiscal 2017 results, the company’s Other Revenue category grew by 80% compared to the year before, driven primarily by L&M income. “The idea is to go for a lifestyle push, to be a part of the everyday,” Frostad says. “It’s always a privilege for a brand to be invited into a kid’s everyday activities.”

Canadian toyco WowWee has proven it has the magic touch with its Fingerlings toy line. Since the brand’s animatronic monkeys first hit shelves in 2017, WowWee has expanded into additional animals (unicorns, sloths and raptors), collectibles, a feature plush line and an upcoming short-form animated series.

According to Fingerlings creator and WowWee brand manager Sydney Wiseman, timing is the foundation of long-term licensing success. “The key to maintaining interest in the brand is to be innovative not just in terms of our releases, but also when we’re pulling back some of those products,” she says. “We announced that the original six monkeys were retired as of January, and we’re no longer producing them. We’re going to continue with that strategy for most of our collections as they come. We’ll only have them for a limited period, so kids are always looking for what’s new.”

WowWee’s licensing strategy is also devoted to ensuring that nothing that carries the Fingerlings name will compete with the toys themselves. As such, the company has inked agreements for a number of complementary categories including crafts (Addo), apparel (Bioworld), board games (Cardinal) and stationery (Sambro).

“We wanted to be opportunistic, but also calculated,” says Russell Binder, founding partner at LA-based licensing and merchandising agency Striker Entertainment, which represents Fingerlings. “We’re trying not to do everything that comes our way, and focus instead on the domestic and global categories that are really important.”

For WowWee, that plays into its emphasis on sticking to schedule. The company signed deals for longer lead-time categories as it built out its licensing program, ensuring that products would be ready for spring, summer and back-to-school windows. “They’ve already resolved the line through next year, and are concentrating on 2020,” Binder says, referencing WowWee’s plans for upcoming animals in the Fingerlings lineup.

Moving forward, the partners are examining possible entries into the digital gaming and location-based entertainment categories, and WowWee will be ramping up its content efforts. “The toy world is really almost an entertainment world now,” Wiseman says. “A hit toy today is equivalent to a hit movie. There is so much opportunity for these original toy brands that are really resonating with kids to go the backwards route and become their own license. Creating a whole property and creating content around it will just help the longevity of the brand for years to come.” 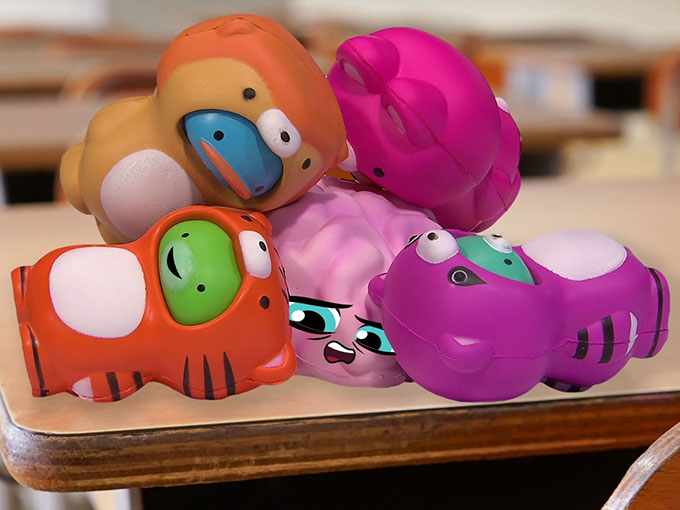 Slow and steady is not the way Nelvana plans to win the race. As the global licensing and merchandising arm for Canada’s Corus Entertainment, Nelvana Enterprises has partnered with Canadian toyco ORB to expand its Soft’n Slo Squishies collectibles line into a global franchise. By focusing on the line’s digital following, Nelvana says it is rapidly expanding the brand.

“We did high-level research on the brand and found that Soft’n Slo Squishies has a highly engaged fan base, primarily through YouTube with user-generated content,” says Mellany Masterson, VP of global consumer products and international distribution at Corus Entertainment. “That’s essentially by way of kids and tweens playing with the line, pulling pranks with them and filming themselves.”

In addition to ramping up global licensing efforts, Nelvana is producing original digital content. This focus on digital is crucial, not only because that’s where the brand’s audience lives, but because it lets Nelvana take advantage of the IP’s momentum since launching last year. “We knew it needed to be a digital play,” Masterson says. “You absolutely want to make sure the toys are still relevant in the market by the time content launches.”

New digital shorts will roll out over the coming months as Nelvana continues to engage with Squishies fans in the lead-up to the consumer products launch, which will start with apparel, sleepwear, accessories, novelty and gift, home décor and publishing.

The focus on lifestyle was another takeaway from Nelvana’s research into the brand’s fan base. “Through the social engagement side of things, we knew that it would very much be a lifestyle-focused consumer products program,” Masterson says.

A number of licensing partners are signing on to the program, with Nelvana now looking forward to additional categories including stationery and digital games. Masterson says upcoming products—both in the collectibles line and in subsequent categories—will be informed by the fans.

“What’s great about short-form digital content is that we can quickly use those first shorts to see if there are themes coming through that we can then take back to ORB and create relevant product extensions around,” Masterson says. “Ultimately, the toy is the anchor, and we’ll always drive back to that with the intent of selling more toys. New content will always help keep a brand fresh and the consumer wanting more.” 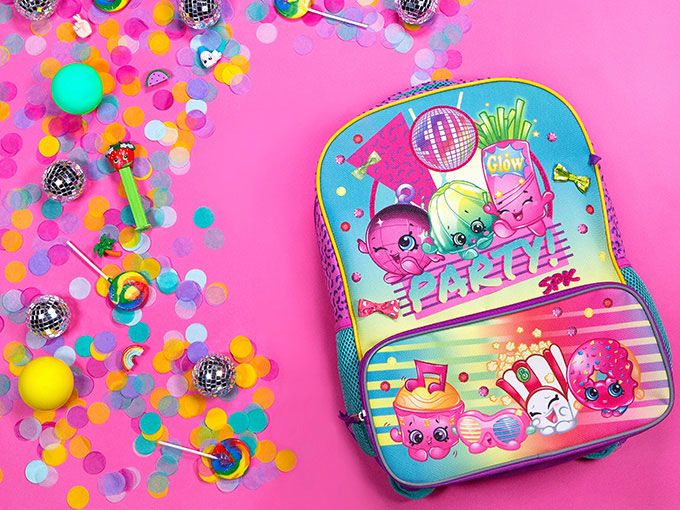 Moose Toys’ Shopkins franchise works with 220 licensees, aligning their development process with the seasonal timeline of the collectibles

Shopkins, the collectibles brand from Australia’s Moose Toys, is an itty bitty behemoth that’s a case study all in itself. “After Shopkins launched, we saw just over 660% growth in our first 12 months,” says Claire McGarry, head of girls at Moose Toys. “At the time, Shopkins really was the first of its kind, the first SKU blind bag collectible that coincided with YouTube and unboxing videos and kid-powered toy reviews. The growth was just absolutely huge.”

The secret to the small toys’ big success, she says, boils down to alignment. Moose Toys focused on finding licensing partners that could provide products that are in alignment not only with what fans were asking for, but also with the timing of the collectibles line.

With Shopkins releasing new collectibles every season, McGarry says the focus for licensing partners has been to coordinate and create opportunities for alignment. “There have been some huge wins, and some opportunities where we perhaps could have been better synced.”

Now a giant looming large over the collectibles category, McGarry says finding alignment for the brand was easier said than done. The Shopkins line’s massive success straight out of the gate led to a chaotic start for licensing. “There was a huge influx of requests from partners,” she says. “Just speaking purely from a resource perspective, we were absolutely inundated. So the challenge was finding what the right direction was, and how we could determine the right approach.”

Today, the brand boasts more than 18 agents worldwide and 220 licensing partners. “We’ve really defied the odds, building out a fully cross-category global licensing program off the back of just one toy,” McGarry says. “We’re in our fifth year and about to launch our 10th season. That is incredible in a category like collectibles, where everyone used to say that you had 12 to 18 months before you’re no longer on trend.”