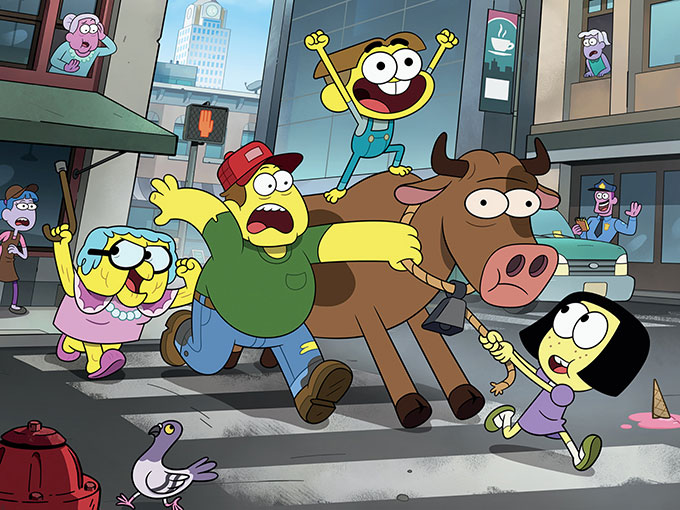 The House of Mouse has greenlit a second season of Big City Greens (pictured) ahead of its June 18 series premiere, while Disney Junior US has picked up the third season of Molang from French prodco Millimages.

Created by comic book writers and brothers Chris and Shane Houghton (Harvey Beaks), the series follows the adventures of 10-year-old Cricket Green. The Houghton brothers serve as executive producers alongside Rob Renzetti (Gravity Falls), while Monica Ray (Harvey Beaks) and Natasha Kline (South Park) are on board to direct.

Big City Green‘s voice cast includes Jon Hamm (Mad Men) as store manager Louis, and Raven-Symone (Raven’s Home) as news reporter Maria. Season one episodes will air daily from June 18 to June 22 as part of Disney Channel’s Go! Summer campaign that kicks off on May 12, before moving into Monday and Wednesday morning time slots on Disney Channel. Animated shorts related to the series will begin rolling out on Disney Channel and Disney Channel YouTube on June 16.

To increase exposure, Disney is also launching a new multi-player game entitled Big City Battle on the DisneyNOW app, which will let players compete to earn their place as a member of the Green family.

In other House of Mouse news, iconic toon bunny Molang will be hopping back to Disney Junior US later this year, following a deal with French producer Millimages.

The new third season—which includes nine x seven-minute Christmas and Halloween specials and summer break episodes—will begin rolling out on Disney Junior US in late 2018. Disney Junior and the Disney Junior block on Disney Channel US currently air the first two seasons of the 104 x three-minute non-dialog series, which follows an eccentric rabbit and his best friend.