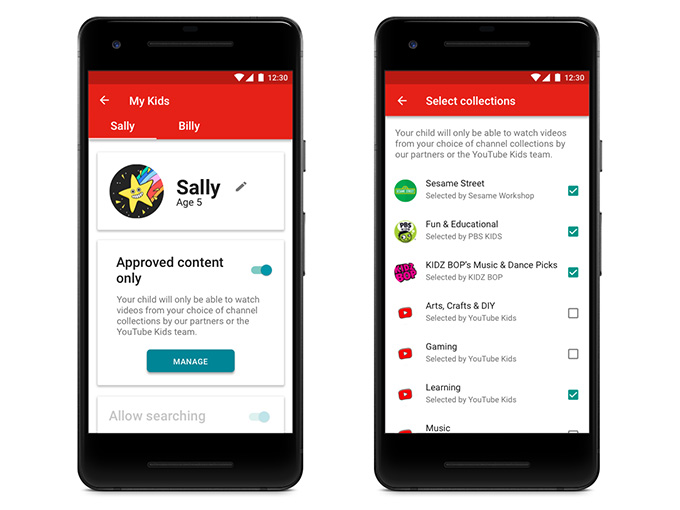 One of three new features rolling out this year on Google's YouTube Kids app will let parents handpick every video and channel that their children can watch in the app.

In its ongoing action to curb complaints that not enough has been done to block inappropriate content in its popular YouTube Kids app, Google has launched three new customization features that give parents more control over the videos and channels that can be accessed by children.

Beginning this week, a feature called Collections will let parents select from new groupings of videos and channels put together by the YouTube Kids team and a number of its trusted partners, including Sesame Workshop and PBS KIDS. Available in the app’s profile settings, the collections will encompass a variety of subjects like arts and crafts, music, sports and learning. More partner channels are expected to be added throughout the year.

For parents wanting even more control over the content available for their children, a second feature launching later this year that will let adults handpick every video and channel that kids can watch in the app.

A third feature available this week will limit the YouTube Kids experience to channels that have been approved by the YouTube Kids team when parents turn the app’s search mode off. The added control means “search off” will not include recommendations from the broader YouTube Kids library.

For parents who still prefer the current version of YouTube Kids, the update won’t affect the wider selection of content available to them, but Google is still encouraging parents to block and flag videos for review that they deem inappropriate for kids.

The extra commitment to human controls over computer algorithms mirrors Google’s new goal of bringing its content moderation team to 10,000 members by the end of the year. The update also comes days after YouTube’s first enforcement report, which says it removed and flagged eight million objectionable videos between October and December 2017. (YouTube did not specify how much of the flagged or removed content was aimed at children.)

It also follows a global update to YouTube Kids last November that gave parents the ability to block and flag content for review for the first time.

In insights related to parents’ concerns around inappropriate content, a recent US survey commissioned by Common Sense Media found that 81% of parents say they alone are responsible for preventing their kids from seeing inappropriate videos on YouTube. The study also found that 37% of parents don’t use YouTube’s parental controls (but are aware of them), and 22% didn’t know YouTube even offered the safety features.

As for YouTube Kids, the app is currently used by 11 million families and has generated 70 billion video views since launching in 2015.