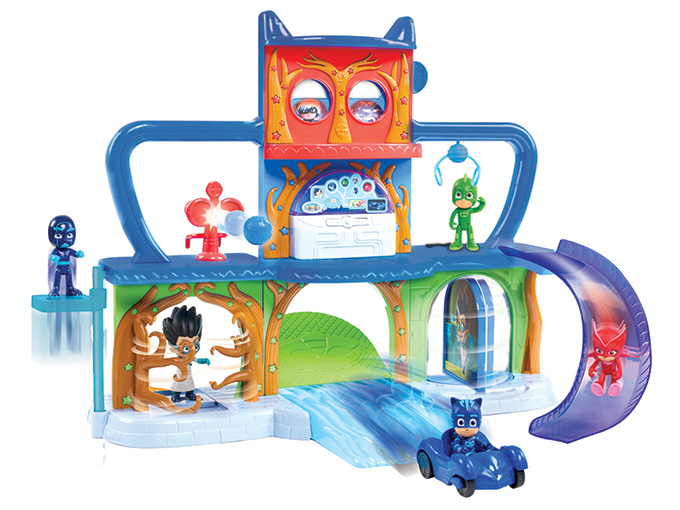 How Entertainment One is expanding its hit preschool property with new content and consumer products.

Toronto, Canada-based Entertainment One (eOne) is suiting up for new episodes of its hit preschool series PJ Masks. The CGI-animated show’s second season launched in the US on Disney Junior last month, and additional eps will hit Disney Junior in EMEA, ANZ and LatAm regions this spring before bowing in Asia in Q3. The series was a true hero for eOne’s growth in 2017, with revenue increasing more than 500% year-on-year from US$2.9 million to US$17.5 million. And this year will see the brand’s consumer products program expand accordingly.

“One of the most exciting things is that we’re adding power-ups for the three heroes in season two,” says Olivier Dumont, president of eOne Family & Brands. “They will discover during the season that they can actually unleash additional powers, beyond what they had in the first season.”

Season two episodes will also feature new characters, including a number of villains. And these fresh faces, as well as the newfound abilities of the show’s heroes, will be featured in upcoming consumer products. More than 200 licensees have already signed on to the brand globally, including Florida-based master toy partner Just Play, whose line hit shelves across North America, the UK, France, Spain, Italy, Australia, Russia, Greece, Israel and South Africa last year. Just Play also recently launched toys in multiple EMEA regions, including Germany, Austria, Switzerland, Benelux, the Nordics, Central Eastern Europe, Turkey and the Middle East, in addition to Latin America and Asia.

“The licensing program is really developing across the board quite simultaneously,” Dumont says. “On the back of season two, these new characters and powers will be introduced in categories like toys, apparel and books.” In addition to updating and expanding the current consumer products program, Dumont says eOne is ready for new licensing partners to don their own PJ Masks capes.

“We’re looking to move into additional categories like ride-ons and construction toys, things like that. We’re looking to diversify and find licensees that have interesting products that can complement our current offering,” he says.

One brand extension that has proven to be especially successful was Time to Be a Hero!, the fully immersive live production based on the series. Featuring music and aerobatics, the live stage show launched in the US and Canada in September 2017 and sold more than 130,000 tickets. Dumont says it will soon be taking center stage in markets around the world. But even as eOne continues to expand the brand, he promises the series will always stay true to its superhero roots.

“It’s a great platform and there is so much opportunity to do good things with the brand,” Dumont says. “We’ve already started development on a third season, and those episodes will expand the PJ Masks world even more, while still remaining true to the idea of everyday heroes and everyday adventures.”