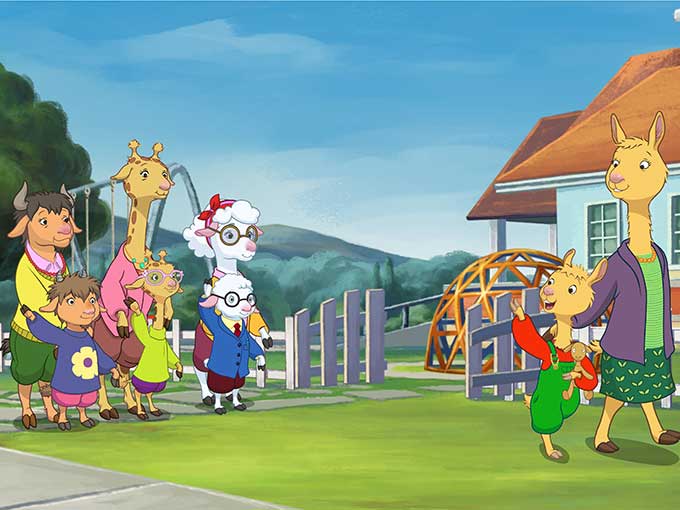 Genius Brands International’s original preschool series is taking Llama Llama from the book shelf to the small screen - and the toy aisle.

Llama Llama is going off-book now that it’s on screen. Genius Brands International’s original preschool show Llama Llama—inspired by the bestselling book series of the same name by author and illustrator Anna Dewdney—premiered globally on Netflix in January. The 15 x half-hour series follows Llama and his Mama Llama (voiced by Jennifer Garner) as they interact with the world around them and deal with the challenges of early childhood.

Now, Genius Brands is set to launch consumer products in the back half of 2018 to further expand the brand. “We are going to start in the US, and then we will roll products out internationally,” says Lloyd Mintz, SVP of global consumer products at Genius Brands. “The series is being introduced in 26 different languages, so it really is reaching around the world.”

Mintz says the consumer products line will launch with the “usual suspects,” including mass as well as specialty and online retailers. Key categories include toys, apparel, home furnishings and juvenile products, and Genius Brands will continue to expand the consumer products program into 2019.

“And obviously, we have this incredible partner in Penguin as publisher of the book series,” Mintz says. “We’re also looking to fill in some holes in publishing that Penguin doesn’t necessarily cover.” The Llama Llama book series has sold more than 20 million units in print to date, and Mintz says brand awareness will play a significant role in the show’s success.

“Unlike other shows that have been out there on Netflix, we are actually starting with a 10-year head start with the book series,” he says. “We started with very high awareness and we’re basically pre-approved by moms. I do believe that puts us on a whole other level.” Another advantage, Mintz says, is that Llama Llama is not limited by close association to either boys or girls, or children from a specific territory.

“It’s a really sweet property about the challenges of early childhood, and these are universal stories,” he says. “It’s gender-neutral and these are not just themes that are confined to the US or a certain income level. I think it really resonates. And that hopefully will translate into kids’ worlds where they have actual physical products that they can interact with and use in their everyday lives.”