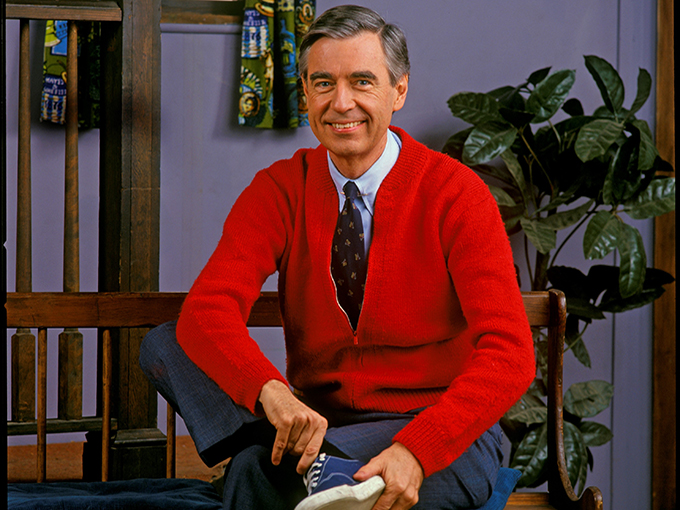 The Fred Rogers Company is celebrating the 50th anniversary of Mister Rogers’ Neighborhood by inviting us all to once again be television neighbors.

“It’s wonderful to have this opportunity to honor and celebrate the legacy of Fred Rogers,” says Ellen Doherty, executive in charge of production at The Fred Rogers Company. The initiative includes an hour-long special, a week-long programming event, a new documentary, a month-long celebration at The Paley Center for Media in New York and L.A, a commemorative Mister Rogers Forever USPS stamp and a Mister Rogers’ Neighborhood POP! vinyl figure collection from Funko. And, earlier this week, an episode of Jeopardy! featured a category dedicated to Fred Rogers and Mister Rogers’ Neighborhood.

The hour-long special, entitled Mister Rogers: It’s You I Like and hosted by actor Michael Keaton, will premiere on PBS stations in March. It will feature celebrities, cast members and Rogers’ loved ones sharing their personal perspectives and insights on the series. Guests including Judd Apatow, John Lithgow, Yo-Yo Ma, David Newell (Mr. McFeely) and Joanne Rogers will reveal their favorite moments from the show and share their personal stories. Mister Rogers: It’s You I Like is produced by JoAnn Young and John Paulson. The Fred Rogers Company’s Ellen Doherty and Kevin Morrison are executive producers.

“The content had an intention and a thoughtfulness that is the bedrock of a lot of children’s media today,” Doherty says. “I think that’s one of the things that cemented the show’s place in children’s television history. Mister Rogers’ Neighborhood was one of the first shows that really altered the landscape of children’s entertainment and what that could be.”

The week-long programming event launches on February 26 and will see an episode of Mister Rogers’ Neighborhood and an episode of The Fred Rogers Company’s Daniel Tiger’s Neighborhood air back-to-back on PBS KIDS. Each day, the two episodes will address complementary themes like loss or angry feelings.

And while the connection between Mister Rogers’ Neighborhood and Daniel Tiger’s Neighborhood are obvious, Doherty says Rogers’ legacy of social-emotional learning can be woven into many forms of children’s entertainment. “It’s hard sometimes when you’re really focused on a show about math, science or dance, because there are so many things you want to accomplish related to those themes,” she says. “But I think that one of the things that’s really important to us as we celebrate this anniversary is to remember to take every opportunity we can to show caring relationships in children’s content.” Regardless of a show’s themes, Doherty says, there is always room for a focus on teamwork or the importance of respecting other people.

The month-long celebration at The Paley Center will include special family screening and activities in March, while the commemorative Mister Rogers Forever USPS stamp will be available this spring. Funko’s POP! vinyl figure collection inspired by the series, meanwhile, will launch this summer.

The Fred Rogers Company will also be sharing various clips on its social media channels throughout the year, with beloved moments from the series carefully selected to help people remember how nice it was to be Rogers’ television neighbor. “He was so thoughtful in how he talked about things,” Doherty says. “That’s why Mister Rogers’ Neighborhood has stood the test of time. He exuded kindness and caring, and approached things that mattered to children.”