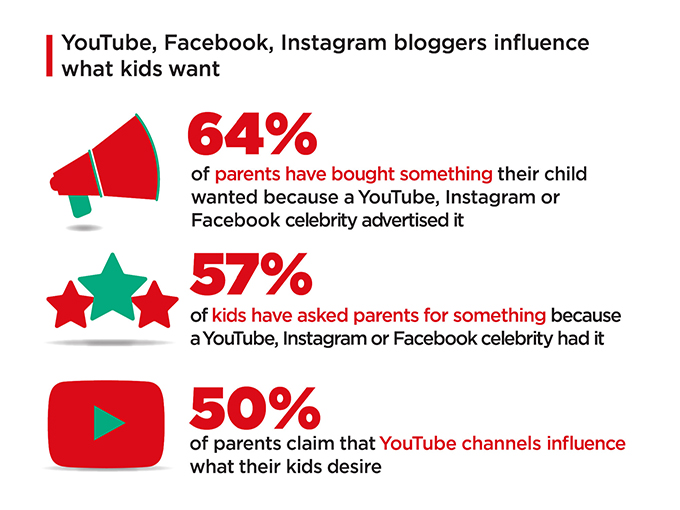 The latest study from TotallyAwesome found 57% of APAC kids have asked parents for a product because a YouTube, Instagram or Facebook influencer had it or used it.

The SuperAwesome-founded, kid-safe platform’s 2018 Kids’ Digital Insights study surveyed nearly 3,000 children ages six to 14 in Australia, New Zealand, India, Indonesia, Malaysia, the Philippines, Singapore, Thailand and Vietnam in November 2017. It found that 57% of kids have asked parents for a product because a YouTube, Instagram or Facebook influencer had it or used it.

The “pester power,” according to the study, led to 64% of parents buying something their child wanted because an online celebrity advertised it. And half the parents surveyed claim that YouTube channels influence what their children desire. (Respondents were parents and kids accessed by third-party online survey provider Toluna.)

As for the overall power of online ads, 52% of APAC kids have used their own money to purchase items that they have seen in an online promotion, up from 45% last year. Online advertising also continues to become more important as kids age. 44% of six- to eight-year-olds, 49% of nine- to 11-year-olds and 59% of 12 to 14-year-olds said ‘yes’ to buying things they saw in a digital ad.

Looking at device usage, 58% of kids multiscreen—54% use a laptop and a tablet at the same time, 42% use a laptop and smartphone, while 32% use a TV and a tablet. While the television set doesn’t factor as much in kids’ multiscreen viewing, it is still their second-favorite device (54%) behind smartphones (76%). Interestingly, the laptop, while key in kids’ multiscreen viewing, is their least favorite device (32%).

In terms of time spent per week on the internet versus TV, APAC kids use the web for 21 hours and 10 minutes, compared to 19 hours of weekly television viewing. The study also found that co-viewing is high in APAC with 85% of parents participating in their children’s media consumption—68% watch videos online with their kids, 61% watch toons together, 46% use apps with their kids and 31% watch series as a family.

TotallyAwesome’s 2018 Kids’ Digital Insights study follows the company’s research from last October revealing that KFC, McDonald’s and Apple are more recognized by Asia-Pacific kids than brands like Disney, LEGO and Barbie. The research also arrives as major kids and family companies continue to maximize opportunities around influencers and third-party advertisers (as seen with Disney Digital Network and Mattel’s Fullscreen Family).