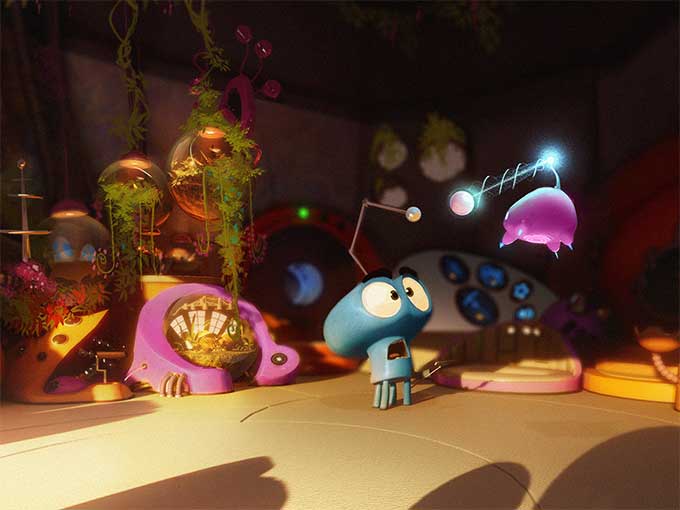 Set in the same galaxy as Invasion!, Asteroids! is an 11-minute film that follows the adventures of little aliens Mac and Cheez. It features Elizabeth Banks (Pitch Perfect) and YouTube star Ingrid Nilsen as Cheez and robot sidekick Peas, respectively, and viewers connect to these characters by becoming a respected member of their alien ship. The film is directed by Baobab co-founder Eric Darnell (Madagascar). (Baobab’s CTO is Larry Cutler, former global head of character tech at DreamWorks Animation and technical director at Pixar).

With a Sundance Official Selection already to its name, Asteroids! has a lot riding on it in terms of making family-friendly VR content more mainstream, according to Baobab Studios CEO Maureen Fan. “One of the reasons Invasion! was and still is the top downloaded free VR experience is because it is a great introduction to virtual reality,” says Fan. “A lot of VR right now is based on hardcore games like first-person shooters, or documentaries about being in Syria that are very serious.”

One way that Asteroids! stands out from Invasion! is the way in which it takes advantage of how VR has progressed over the last 18 months. For example, the first film allowed viewers to look down and see that they had a bunny body, but they weren’t able to interact with other characters. Now, Asteroids! taps into virtual reality controllers, allowing viewers to travel through an arc and become a valued member of a team, thereby blurring the lines between movie and game.

Also evolving is Baobab’s revenue model, which relies on film partnerships and licensing deals with companies like Samsung, which will be showing Asteroids! in its flagship store in New York. Fan says the studio has been waiting for today’s release of Asteroids! to see what other partnerships arise in film, TV and consumer products.

For now, the studio is sitting on more than a dozen new VR concepts, including Legend of Crow (working title). Bowing next year, the film is based on a Native American legend and stars musician John Legend.

The rise of family-friendly VR content comes on the heels of Nickelodeon joining a US$30-million Series B funding round for L.A.-based VR startup Dreamscape, which intends to produce VR experiences that integrate the kidsnet’s popular IP. The Virtual Reality Company, meanwhile, recently debuted its first film, Raising a Rukus, which is set to be a part of kid-friendly storytelling franchise.