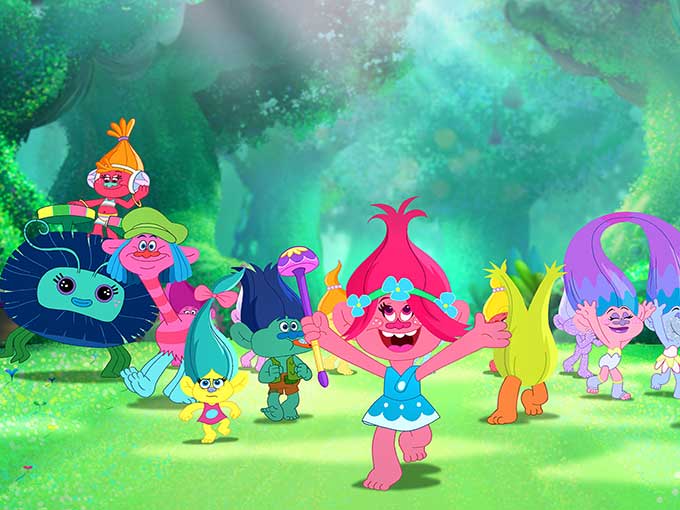 DreamWorks & Netflix to roll out six series in 2018

Trolls: The Beat Goes On! (pictured), The Boss Baby: Back in Business and a re-imagining of the ‘80s TV hit She-Ra are among the new series heading to the streamer.

In furthering their ongoing content partnership, Netflix and DreamWorks Animation Television are set to release six new original series in 2018 exclusively on the streamer.

The new slate includes Trolls: The Beat Goes On!, She-Ra, The Boss Baby: Back in Business, Harvey Street Kids, The Epic Tales of Captain Underpants, a third season of Trollhunters, and the previously announced second installment in the Tales of Arcadia trilogy, entitled 3 Below.

The extended agreement kicks off with Trolls: The Beat Goes On! (pictured), which will bow on January 19. The series is based on DreamWorks’ 2016 hit feature film Trolls, which grossed nearly US$350 million worldwide. Matthew Beans (Robot Chicken) will serve as executive producer, with Skylar Astin (Pitch Perfect) and Amanda Leighton (This Is Us, The Fosters) taking over for Justin Timberlake and Anna Kendrick, respectively, as the voices of Branch and Poppy. Alana Da Fonseca (Pitch Perfect 3) will write and produce original songs for the series. It will premiere exclusively on Netflix in the US, Canada, Latin America, the UK, Australia, New Zealand, Ireland, the Nordics, Benelux and France.

She-Ra is a modern take on the ’80s girl-power icon that will be re-imagined by executive producer Noelle Stevenson (Lumberjanes, Nimona). The property originally debuted in 1985 and the new version will be available to Netflix members worldwide in 2018. The series will focus on female friendship and empowerment led by a warrior princess.

The Boss Baby: Back in Business will continue in the same vein as the 2017 movie (which grossed US$500 million at the worldwide box office), following the titular character and his older brother Tim as they navigate Baby Corp. Available to Netflix members worldwide in 2018, the series is executive produced by Brandon Sawyer (Penguins of Madagascar).

Also following in the footsteps of a recent DreamWorks big-screen movie is The Epic Tales of Captain Underpants, based on the books by Dav Pilkey. The movie Captain Underpants: The First Epic Movie grossed US$125 million at the global box office during its 23-week run in theaters this year. The TV series will follow the adventures of best friends George Beard and Harold Hutchins. Peabody and Emmy Award-winning producer Peter Hastings (Animaniacs, Kung Fu Panda: Legends of Awesomeness) will executive produce the series, which is set to be released globally on the streamer in 2018.

Completely brand-new series, Harvey Street Kids, will follow the never-ending adventures of the Harvey Girls Audrey, Lotta and Dot. Brendan Hay (Dawn of the Croods, The Daily Show with Jon Stewart) will serve as executive producer, with Emmy-winning Aliki Theofilopoulos (Phineas & Ferb,Descendants: Wicked World) on board as supervising producer. It will also premiere worldwide next year.

Meanwhile, the third and final season of Trollhunters from Guillermo del Toro is set to debut in 2018, following the season two premiere next week. Del Toro announced in November that the popular series would be a part of a trilogy called Tales of Arcadia. The second series in that trilogy, 3 Below, will bow in 2018 and will be followed by the final chapter, Wizards, in 2019.

DreamWorks Animation Television and Netflix have worked together since 2013, creating 12 original series including DreamWorks Trollhunters, Dragons: Race to the Edge, DreamWorks Voltron Legendary and DreamWorks Spirit Riding Free. The partnership was expanded in January 2016 to include a multi-year deal for a number of originals.

3 below, DreamWorks Animation Television, Harvey Street Kids, Netflix, She-Ra, tales of arcadia, The Boss Baby: Back in Business, The Epic Tales of Captain Underpants, Trollhunters, trolls: the beat goes on!