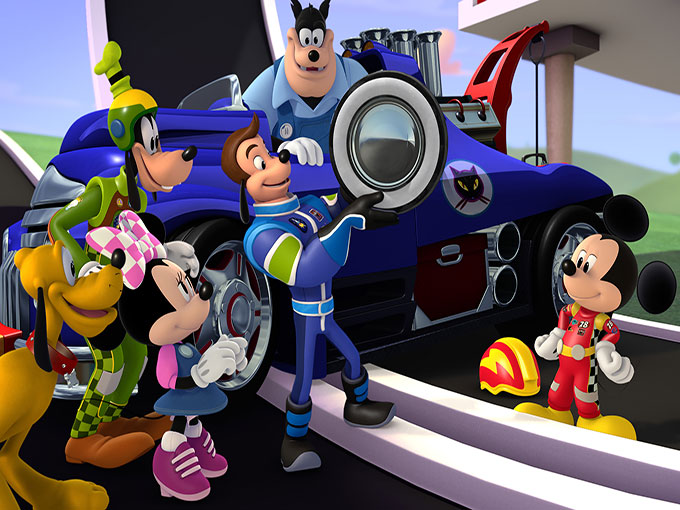 Seven original holiday episodes based on toons like Mickey and the Roadster Racers (pictured) are set to bow, along with a music-driven Disney Parks special.

Mickey and the Roadster Racers (pictured), Puppy Dog Pals, Star vs. The Forces of Evil, Milo Murphy’s Law, Marvel’s Avengers: Secret Wars, The Lion Guard and Stuck in the Middle all have specials airing between December 1 and 8 on Disney XD and Disney Channel

The original Parks special airs on December 1 at 8:30 p.m. EST on Disney Channel. It is hosted by Raven-Symone and Isaac Ryan Brown (Raven’s Home) with special performances and appearances from Descendants stars Dove Cameron, Sofia Carson and Booboo Stewart, among others.

Mickey and the Roadster Racers will premiere its two-part holiday specials Happy Hot Diggity Dog Holiday and Happy Holiday Helpers on December 1. The first half is about Chip and Dale racing to win a Golden Star Tree Topper with comedian Jay Leno appearing as racer announcer Billy Beagle. The second half follows the Happy Helpers preparing for an office Christmas party.

Puppy Dog Pals is airing its two-part special on December 1 called A Very Pug Christmas and The Latke Kerfuffle. The first half includes a song performed by Huey Lewis as junkyard dog Bulworth and Henry Winkler (Happy Days) as Santa.

Star vs. The Forces of Evil’s two-part episode will air on December 2, along with Milo Murphy’s Law – A Christmas Peril.

Disney is the latest in a string of broadcasters to announce their holiday specials for the year, including Netflix, PBS KIDS and Amazon.