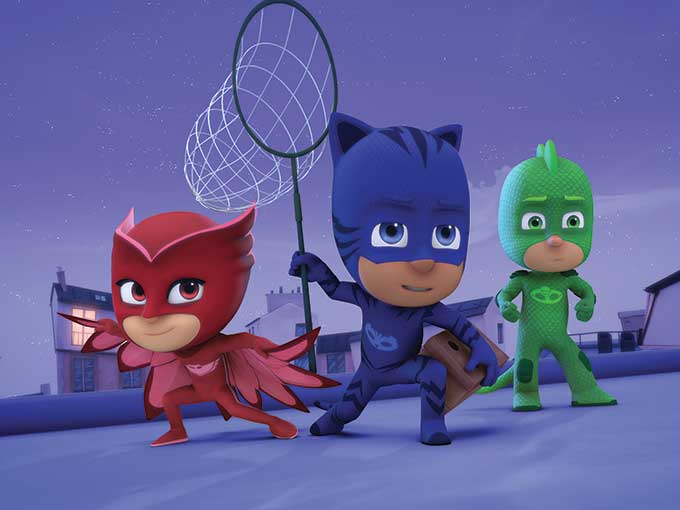 Continued momentum for PJ Masks (pictured) and Peppa Pig led the Toronto-based entertainment company's Family revenue to rise by 64% in the first half of 2017.

Gains in its Family and TV businesses cancelled out losses on the Film side as Entertainment One (eOne) reported stable overall revenue in its half-year results, released November 21.

For eOne’s Family business, steep year-over-year revenue increases were driven by children’s properties Peppa Pig (up 17%) and PJ Masks (up 600%). Total Family revenue for the period was US$82.3 million (£62.1 million), up 64% from US$50.2 million (£37.9 million) in 2016. In fact, PJ Masks now accounts for roughly 36% of total Family licensing revenue, and the company’s financial report noted that eOne expects its number of licensing agreements in China to increase to 60 by the end of fiscal 2018, growing threefold from fiscal 2017, due to increased exposure on broadcast and on-demand platforms.

In 2015, Peppa Pig bowed on national broadcaster China Central Television (CCTV) and then launched on several VOD platforms last year. Last month, eOne partnered with Merlin Entertainments to develop and operate location-based entertainment attractions based on the preschool series. The multi-territory agreement (excluding the UK) will see Merlin roll out new formats and themed accommodations featuring Peppa Pig. PJ Masks, meanwhile, will continue to roll out across Europe and Asia, with a full launch in China targeted for 2018.

Earlier this year, eOne announced it was combining its global film and television sales teams in order to streamline its operations. The company noted in Tuesday’s financial report that its integration of its film and TV divisions into a single studio operation is expected to generated annual savings of US$10.6 million (£8 million) by 2020.