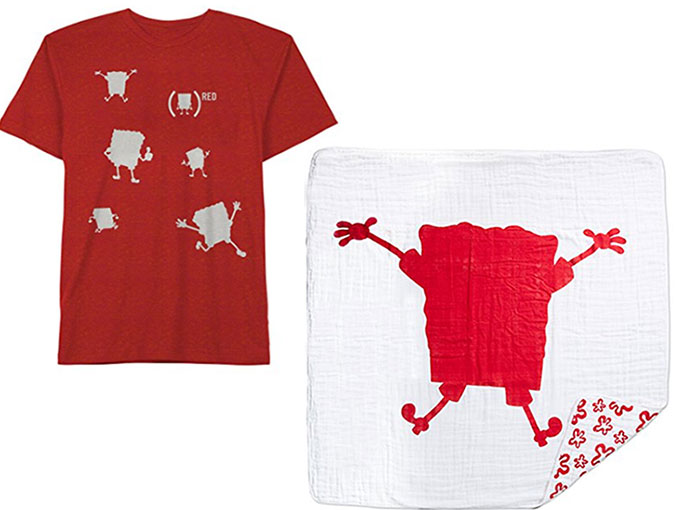 The (SPONGEBOB)RED line, which includes kids apparel and skate decks, raises money for the Global Fund to Fight AIDS, Tuberculosis and Malaria.

In partnership with (RED), Nickelodeon has debuted a collection of products inspired by SpongeBob SquarePants in support of the Global Fund and to raise awareness around the fight to end AIDS. The partnership between Nickelodeon and (RED) will extend through 2018, and Nick’s proceeds from all (SPONGEBOB)RED products will go to the Global Fund to Fight AIDS, Tuberculosis and Malaria.

A number of these products are available through Amazon (at Amazon.com/RED), including a special edition blanket from aden + anais, kids apparel from Junk Food as well as a skate deck from Chocolate Skateboards. Other items from the collection are available through Bloomindale’s, both online and in stores, including girls apparel from Butter Super Soft and sleepwear from Global Brands Group.

The (SPONGEBOB)RED collaboration was first announced in June, with SpongeBob SquarePants designs by Jeremy Scott debuting as part of the Moschino Resort 2018 collection. The new initiative is the latest in a number of partnerships surrounding SpongeBob. Earlier this year, the SpongeBob Gold fashion line launched at Wonderland Shop in London. The collection is a collaboration with UK designers Peter Jensen, Bobby Abley and Bad Denim, as well as Italy’s Salar and Maria Francesca Pepe and with Korean designer Suecomma Bonnie.