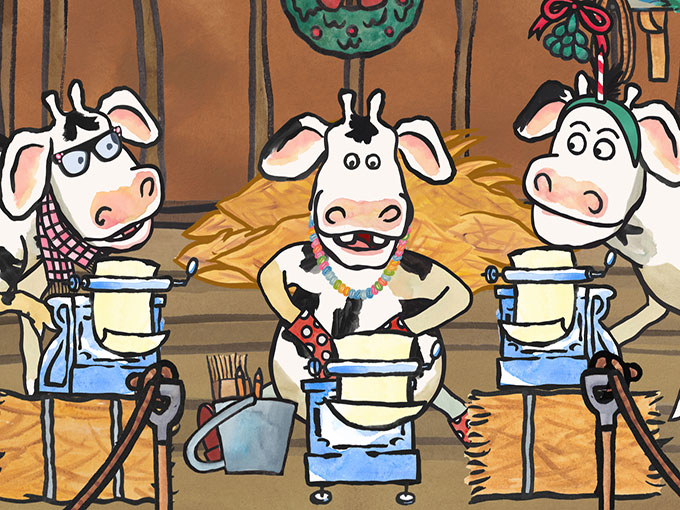 Directed by Peg + Cat's Jennifer Oxley Click Clack Moo: Christmas at the Farm (pictured) will bow this month, followed by Pete the Cat: A Groovy New Year in December.

Amazon Prime Video Kids is set to release two new holiday originals, Click Clack Moo: Christmas at the Farm and Pete the Cat: A Groovy New Year, which will join the SVOD giant’s lineup of specials and holiday episodes from previous years.

Bowing on December 26, Pete the Cat: A Groovy New Year is a co-production with Alcon Television Group and Appian Way. It is based on the award-winning book series Pete the Cat by Kimberly and James Dean. Jeff “Swampy” Marsh (Phineas and Ferb) serves as showrunner, and the characters are voiced by Jacob Tremblay (Wonder), Atticus Shaffer (The Middle) and Django Marsh (Phineas and Ferb) with Elvis Costello and Diana Krall. The music from the special will be made available on a soundtrack EP from Alcon Sleeping Giant (ASG Records) to stream on Amazon Music in December ahead of its premiere.

Previous holiday content from Amazon Prime Video Kids includes the special If You Give a Mouse a Christmas Cookie and The Snowy Day. As well, the SVOD offers original holiday episodes of its popular kids series including one from The Stinky & Dirty Show season two, Wishenpoof season two, Creative Galaxy season one, Tumble Leaf season two and Bookaboo season one.