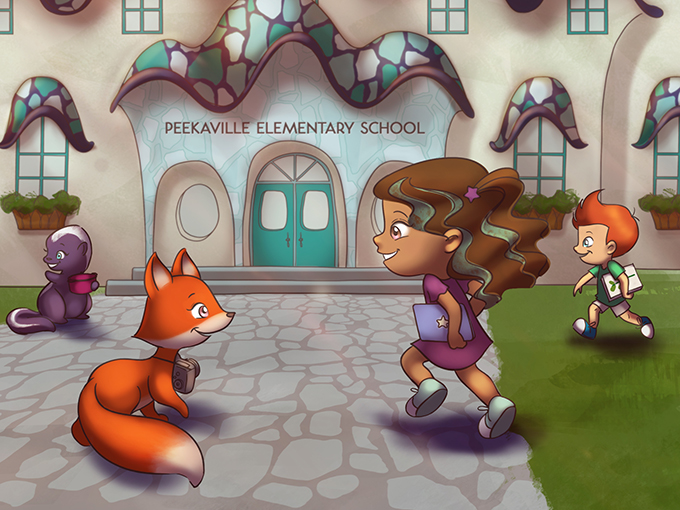 As teaching more abstract social-emotional learning (SEL) skills like gratitude, empathy and respect to young children becomes increasingly important both in school and at home, ed tech startup Peekapak is broadening its SEL online platform and curriculum with a new immersive digital game, myPeekaville, and plans further growth, including a TV series and publishing program.

Aimed at children ages three to 10, myPeekaville features story-based learning, narration for younger kids, longer chapter books with more vocabulary for older students, mini-games and Peekapak’s diverse cast of popular 2D-animated human and animal characters known as the Peekapak Pals. myPeekaville has been pre-sold in a limited early release to more than 750 US classrooms (13,000-plus students), including New Jersey’s Elizabeth Public Schools District and Colorado’s Denver Public Schools District. An iOS and Android app for the game is in the works, too.

The web-based interactive world lets kids customize their own avatars, learn how to identify their feelings, practice new character skills like kindness and self-regulation, complete quests, and collect berries (Peekaville’s currency) to redeem prizes. Additionally, myPeekaville offers a unique daily check-in for kids to input whether they are feeling happy, sad, calm, nervous, angry or fine. The real-time data is compiled in a mood dashboard to help teachers monitor a students’ sentiments over time. 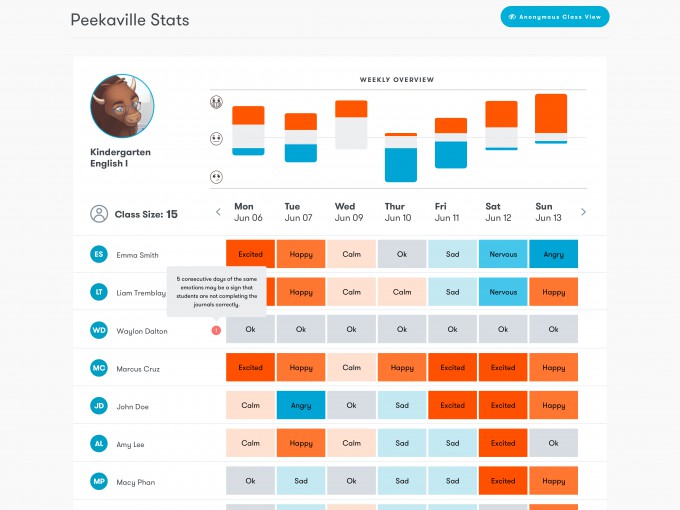 Peekapak has also been selected as a member of the fall 2017 Ignite group at Oakland, California-headquartered NewSchools Venture Fund, meaning Peekapak is one of 15 ed tech companies awarded funding through the NewSchools Ignite Early Learning Challenge. It requires members to create or expand a product that can help millions of US students in Pre-K second grade.

Since former teacher and Proctor & Gamble marketer Ami Shah co-founded Peekapak two years ago with children’s writer Angie Chan, the research-based and literacy-focused learning company is now used by more than 12,000 educators in 90 countries, covering more than 150,000 students in Pre-K to third grade classrooms and at home.

The company has also expanded into publishing with three Peekapak storybooks now available as paperbacks on Amazon. Negotiations with additional publishers, according to Shah, are also underway.

“We’re still in the very early stages, but James is helping us form a pitch and we’ve had some introductions to local broadcasters and partners,” says Shah. “Because we are very narrative-focused, our 10 existing storybooks will be the groundwork for the TV series. With people like Candace, James, Rick and Dr. Cole, we’re starting to build out our vision for a more omni-channel approach.”

The startup is also looking for co-production partners. “We’ve been advised to go down the co-pro route. It won’t be an all in-house production,” says Shah.

The series, adds Shah, will provide easier opportunities for parents to start conversations with their children about topics that are often overlooked or are difficult for parents to approach.

“Through research, we’ve learned that parents often don’t know how to teach or talk to their children about SEL skills and ideas. We help parents start and facilitate important conversations with their children through relatable examples and scenarios created by characters they love,” she says. “Additionally, we’ve worked with Dr. Kimberly Bezaire, an early childhood development professor at Toronto’s George Brown College, to research, create and refine the way we involve parents in a child’s learning process.”

On the data side, Peekapak is working with MediaKidz Research & Consulting founder, Sholly Fisch, who was previously VP of program research at Sesame Workshop.

The company is also eyeing further growth in the licensing and merchandising space.

“In talking to Sesame and their licensing group, we see a lot of potential to develop educational merchandise or games, tools or other physical things that could be brought to market. We’re curious about how we can work with partners on these types of products,” she says.

Peekapak’s plan for a television series comes amid increased demand for empathy-inspired programming for kids. Peekapak is also among a number of education-based properties including Badanamu from South Korea’s Calm Island and Dr. Panda that have recently evolved into TV series. On the flip side, entertainment companies are also finding it hard to resist the US$8.4-billion ed tech market.