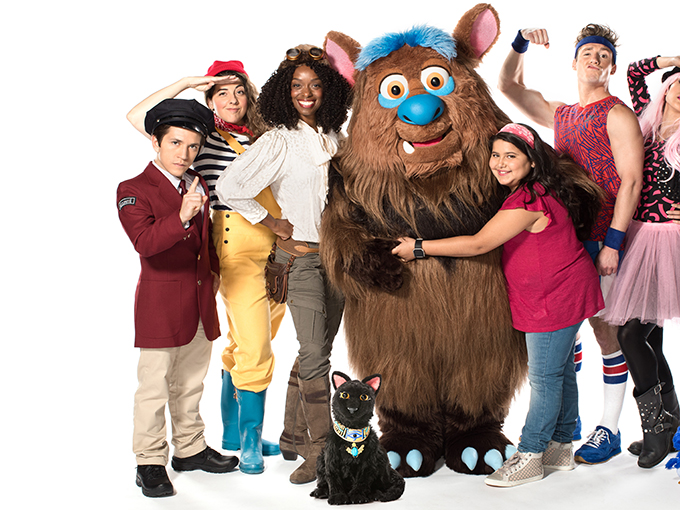 How the Canadian French-language pubcaster is using VR and real-time video game technology to enhance its educational shows.

In 2015, when TFO was looking for a better, faster and more cost-efficient way to produce educational kids content for its rapidly expanding production pipeline, the Toronto-based pubcaster ultimately made a decision that would completely change its own reality.

With support from global tech companies including Zero Density, Technologie by Ross, Stype, Mo-sys, CEV and Applied Electronics, TFO invested in a brand-new, state-of-the-art studio driven by virtual reality technology and the powerful Unreal video game engine by Epic Games. Laboratoire d’Univers Virtuels, or LUV for short, opened its doors in Toronto last fall at a crucial time for TFO. Over the last six years, the pubcaster’s pipeline has grown by 220%, with a much larger presence on YouTube. Its channels there are currently the leading source of French-language educational content in Canada and have exceeded 400 million views.

“Obviously, TFO has its TV channels, but our primary distribution is on digital platforms because that’s where the industry is going,” says Nadine Dupont, TFO director of multiplatform content creation. “Being able to upload and refresh content quickly and grow the YouTube catalog online is really important for us.”

For its programming universe, which includes the popular Mini TFO brand for kids ages two to nine and additional content for tweens and teens, Dupont says TFO previously spent between US$200,000 and US$240,000 to build in-house sets and permanent installations. (Think a house, complete with bedrooms, a kitchen, bathroom and backyard.) “With the LUV studio, we can now build any virtual world within reason, and it might only cost between US$2,400 and US$4,000 on average for something original,” says Dupont.

To ease the transition to filming live-action kids shows in a VR-compatible studio, TFO began by shooting 30-second, live-to-tape videos that focused more on education and less on character and story. “Myself, the directors and even the writers had never worked with virtual sets before, so we took the opportunity to produce a different type of educational content and focused less on pumping out narratives, which are obviously more challenging and take more preparation to shoot,” says TFO kids producer Renée Paradis. “The shorts helped with the learning curve and the fact that everybody’s job had to adapt.” Using LUV, the pubcaster was able to produce up to 40 short videos in real time daily, and delivered 250 episodes between September and February 2017 for its digital and linear platforms.

Once TFO and its partners became more acclimatized to the virtual production process, it got to work on its first LUV-made narrative series, Minivers. Bowing last month, the 40 x seven-minute show for kids two to six stars Josée, Lexie and Christopher, the popular hosts of TFO’s flagship series Mini TFO.

According to Dupont, the series, which features 18 virtual sets, was originally meant to be a longer format, but was changed to seven minutes because of potential challenges with the new technology. “We felt that a shorter format would give us the ability to adjust and adapt better and faster,” she says.

Meanwhile, the two areas that required the most trouble-shooting were writing and acting. On the writing side, pre-production required a lot more communication between the virtual set designers and the writers. “In the virtual set, for example, if there is a door in the background and it’s not designed to ever open, yet a script has people coming in and out of someone’s office, it won’t work. Either the set, which has already been designed, has to change, or the script does. What is or isn’t virtual needs to be communicated to the writers ahead of time,” says Paradis. She adds that these types of hurdles have bred more creativity among the show’s writers.

As for actors, working in a virtual set environment with green screens means going in early with the directors to learn blocking. “Just being in a giant green room is something to adapt to in terms of perspective, but the actors had monitors showing the virtual POV to guide them,” says Paradis. “However, their left is actually the right of the screen, so they had to orient themselves accordingly. Fortunately, our actors picked it up fast, and the screens helped them deliver more authentic performances.” Paradis also notes that Zero Density, which helped with the sets, suggested always having a real physical item like a bed or a couch on set that could then then be incorporated into the virtual set to help anchor the actors’ performances.

In terms of hiring talent, TFO hasn’t changed how or who it casts because most actors will have to learn the tricks of the trade anyway. “We keep this in mind for the first few times they are in front of the camera. We let them take their time and adapt,” says Paradis. Covering so much new ground also means that the studio serves as an incubator for certain types of job skills. “Because pre-production is very heavy, we had to hire support staff like coordinators and assistants. When you add in the complexities of virtual reality, it requires an extra layer of coordination. There are numerous roles that we’ve also inherited from the gaming world, like concept artist, 2D artist and 3D modeler,” says Paradis.

TFO’s second 40 x seven-minute original kids series to get the LUV treatment is Lorenzo & Lili, a live-action adventure/comedy with effects and puppets for kids ages six to nine. The series follows the adventures of an unlikely trio of friends that embarks on a mission to protect the neighborhood library from demolition.

As for the VR angle, Lorenzo has extraordinary powers that allow him and his pals to be transported into the actual heart of a book. TFO shot a pilot for the series in early September and is in the final phase of building the virtual sets. Production will start this fall, with digital and on-air delivery expected by January 2018.

Looking at other opportunities for LUV, the studio already offers some augmented reality capabilities, and TFO is looking to expand into 360-degree video and motion-capture production. The studio is also now available to third parties that may want to use VR for their own educational content. “We’ve had a few external clients come in and start the process to evaluate and budget projects,” says Paradis. “We’re hoping to move ahead with two kids projects this fall that are within the production realm. And we would eventually like to open a second studio.”