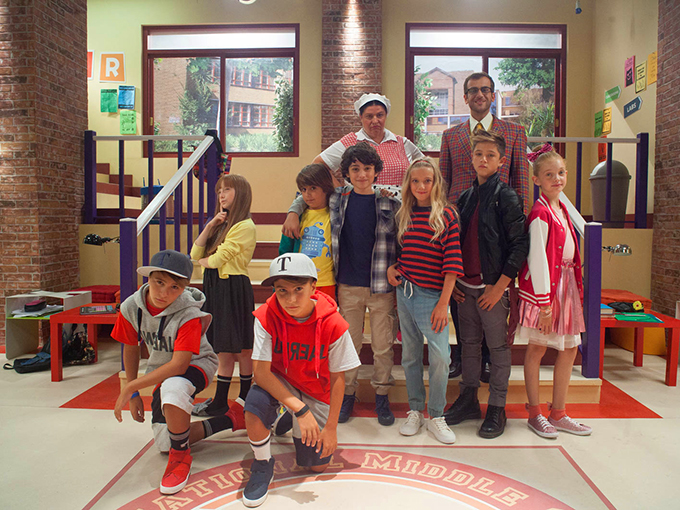 Italian broadcaster De Agostini wants to accomplish two important tasks in TV—keep on top of new government content quotas and compete in the international market with high-quality kids content. And with its new live-action scripted show for kids ages seven to 12, New School, it’s on the path to achieving both.

The concept for New School‘s 26 x 26-minute first season, set to air in December, was conceived by De Agostini. But in an effort to make its most international show yet, the broadcaster opted to have the scripts written in English by Canada’s Beachwood Canyon Productions and then translated into Italian for the version that will run on pay-TV channel DeAKids. (All production and distribution is handled by De Agostini.)

“It’s a big move for us because we are going from classic De Agostini factual and scripted content to the kids scripted content space for an international market,” says Massimo Bruno, head of TV channels at De Agostini Editore. “So for us, it’s a big change with content that we think can travel really well.”

Themes of change and transition are woven into New School, which follows kids as they embark on their first days at middle school only to discover an old out-of-service room that only children can enter. The series has already been renewed by De Agostini for a second season, which is set to air in September 2018.

“It’s the right mix between aspirational drama and comedy, and that’s not very easy to find in live-action scripted content coming from a network at the moment,” says Bruno. “You can find very aspirational teen/tween content, or comedy that’s more in animation, but not usually both together.”

Aside from being De Agostini’s first scripted live-action show for kids, it is one of the broadcaster’s most ambitious projects yet. While Bruno declined to reveal the specific budget, he says the production cost much more money and took more time than the broadcaster’s typical productions. For example, it took two years to find the right cast, while three months is more in-line with most Italian productions.

Beyond co-producing a series that could play well internationally, De Agostini has been trying to stay on top of new Italian content laws. The Italian government is in the midst of passing a law that will make its broadcasters adhere to original production quotas set across the European Union. The amendment to Italy’s Consolidated Law on Radio and Television means at least 55% of film and TV fictional content must be produced in Europe. By 2020, the quota will rise to 60%, with a third to be produced in Italy. Every national network in Italy will also have to air at least one Italian-produced movie or TV series each night between 6 p.m. and 11 p.m.

“Thanks to this, I think the industry in Italy will have a chance to finally go to the next level in terms of kids entertainment,” says Bruno. In the past, De Agostini has focused on animated projects in the kids space to fill these kind of requirements, such as Miraculous: Tales of Ladybug & Cat Noir developed in collaboration with Toei Animation, SAMG Animation, Zagtoon and Method Animation. It also recently entered into a joint-venture with Viacom International Media Networks, which took a 50% stake in free-to-air kids TV channel Super!

For now, New School is going to live on DeAKids, but Bruno says he will be looking at its free-to-air options in the new year. DeAKids also has big digital plans for the series with an interactive app, created by De Agostini Digital, set to launch on the App Store, Google Play and Amazon for free after Christmas. There will also be a companion website launching around the same time.