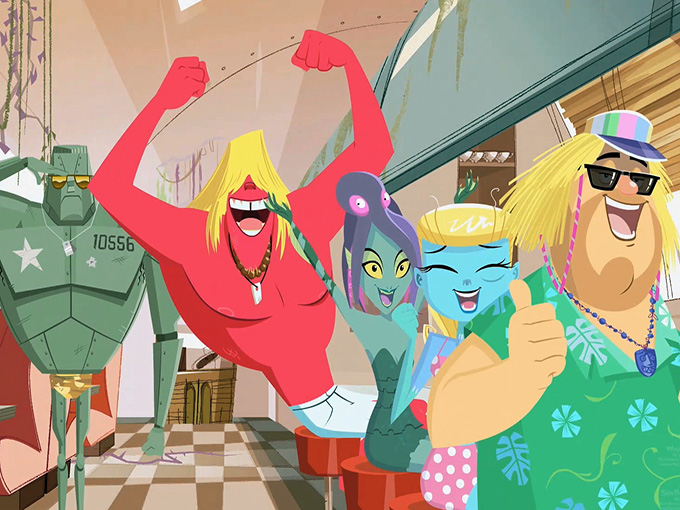 The new original series from Aussie prodco Bogan Entertainment Solutions is based on its hit 2015 Cartoon Network TV movie of the same name.

Currently in pre-producion, the series is set to air on Turner International’s kids channels Cartoon Network, Boomerang, POGO and Boing across EMEA, LatAm and Asia Pacific in 2019.

Monster Beach plays with the unlikely combination of surfing, hot-rods and mostly lovable monsters. It’s created by Patrick Crawley, Bruce Kane and Maurice Argiro of BES Animation, the same team behind the TV movie. Set on a tropical island inhabited by both humans and monsters, the series follows the comedic adventures of inseparable siblings Jan and Dean, who must foil the evil schemes of megalomaniac monster Dr. Knutt and his band of Tiki henchmen.

Cartoon Network originally greenlit a pilot episode for the series adaptation in November 2015 and added it, along with three other Australian animated projects, to its regional lineup in 2016.

The IP follows Cartoon Network’s first-ever, full-length Australian-made series Exchange Student Zero, which premiered in 2015. Other recent kids commissions from Turner International include Roll No. 21, Beat Monsters, The Sketchy Show, Lamput, Bill and Tony and Boomerang original The Happos Family, which was picked up for a second season in May by parentco Turner EMEA.

Cartoon Network EMEA, meanwhile, is set to bow its new original comedy The Heroic Quest of the Valiant Prince Ivandoe next month, and Turner’s South Asia kids brand POGO recently produced Tik Tak Tail, an original made-in-India series about a bunny and a tiger whose tail has a mind of its own.