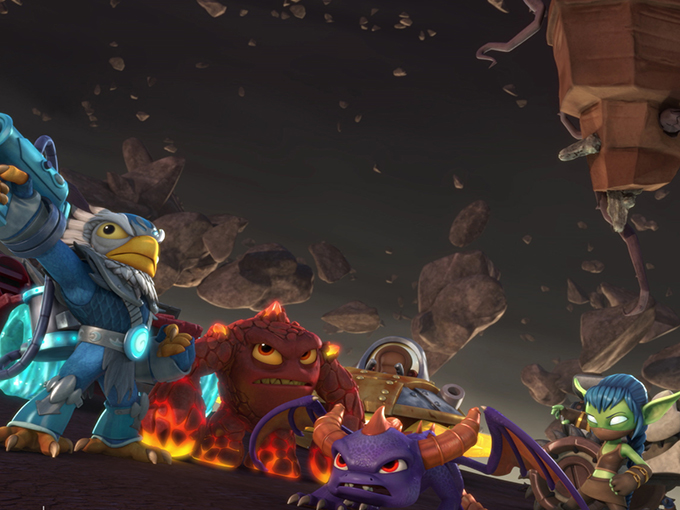 Season two of Skylanders Academy, the series based on Activision Blizzard’s US$3.5-billion video game franchise, is dropping on Netflix today and showrunner Eric Rogers (Futurama) says the pressure to live up to the game is palpable.

“The game creators did a fantastic job of creating this universe and saying here are all the toys in the toybox you get to play with,” says Rogers. “We needed to take some liberties with that to try and tell the best possible version of what we think the TV show should be and try to make it as funny as we can. So it’s just a matter of applying what we think works for a television program to what has already been so wonderfully laid out with the Skylanders video games.”

The first season of the show premiered in October 2016 and earned a 90% Fresh score on Rotten Tomatoes. But fans’ love for the first season, along with the success of Activision Blizzard’s game, has led to a bit of tension between its audience and the show’s creatives as the second season is set to debut.

Netflix declined to release viewer numbers for the first season, but the show was greenlit for a third season in February before production on the second installment had been completed. The third season is set to bow in 2018 and the series was also picked up for global distribution by New York-based 41 Entertainment. Produced by Activision Blizzard Studios, with Paris-based TeamTO overseeing the animation, the show is available in 25 languages.

Facing the pressure head on, Rogers intends to expand upon the Skylanders universe this season with some new characters. Felicia Day (Dr. Horrible’s Sing-Along) is joining the cast as Cynder and Grey Griffin (The Loud House, Blaze and the Monster Machines) as Sprocket. Keeping with Netflix’s trademark secrecy, Rogers doesn’t want to say who the other new characters are in case it spoils anything for game lovers and viewers.

The production team had a shortlist of talent it wanted to cast and secured every last star on that list. “I think it’s the quality of the show, plus the fact that it’s such a well-known worldwide IP,” says Rogers. “I think it made it easy to reach out to all of these well-known film and TV stars; it made it easy for us to approach them with a cool thing we were working on with a really famous property and we got so lucky.”

Rogers and his team are also shaking up the plot a bit in the second season, leaning into the serialization-friendly Netflix platform. It will focus on protagonist Spyro and arch-villain Kaos questioning how they got to where they are.

What won’t see much change, though, are the locations and characters introduced in season one. While not specifying dollars spent, Rogers confirms the show is expensive to animate and wanted to keep the money on the screen. “Introducing a new character every episode would just blow our budget up, so we had to be really pragmatic and responsible about who we brought to the show character-wise and why,” he adds.