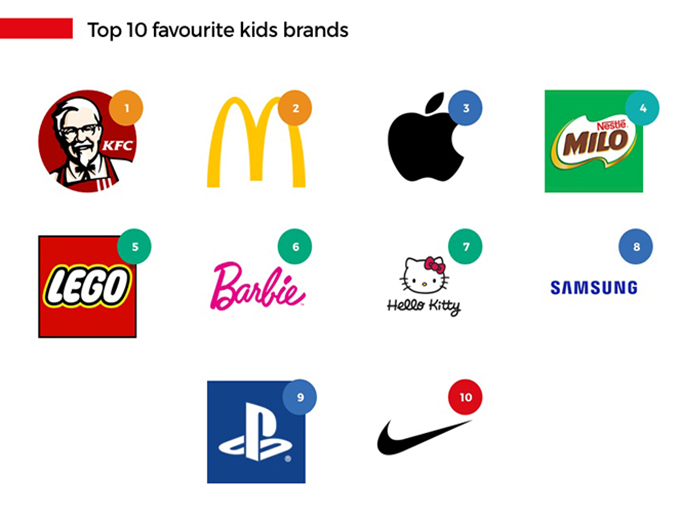 The latest report from TotallyAwesome finds that KFC, McDonald's and Apple are more recognized by Asia-Pacific kids than brands like Disney, LEGO and Barbie.

The kid-safe platform’s 2017 APAC Kids’ Digital Insights study, which surveyed children ages six to 14 in Australia, Indonesia, Malaysia, the Philippines, Singapore, Thailand and Vietnam, found that among the top 25 most recognized kids’ brands, Nestle’s chocolate malt drink Milo, which originated in Asia-Pacific, comes out on top at 93%. Milo is followed by KFC and sports brand Adidas at 88%, Apple and McDonald’s (84%), Nike and Samsung (80%), LEGO (76%), Disney (73%) and Sony (67%), to round out the top 10.

However, in terms of brand affinity, the top 10 list shifts when the same kids were asked to select their favorite brands among the most recognized list. KFC, for example, knocks Milo from the top spot down to four, McDonald’s moves up a notch to second favorite brand, Apple remains in third place, while LEGO jumps up from eighth to fifth.

Barbie, meanwhile, rises to sixth, Hello Kitty enters the list at seven, Samsung drops to eighth, PlayStation takes a big leap forward in popularity from 16th to ninth, while Nike falls from the sixth most-recognized brand to 10th most favorite.

The findings, according to the report, suggest that while there is a strong link between recognition and affinity, additional factors like the longevity of a brand—such as Hello Kitty—can also influence personal affinity by shaping peer usage, along with perceptions of quality and identity.

Kids surveyed determined that they like brands the most because they are relevant and of high quality.

The report follows TotallyAwesome research from June, which revealed that kids in most APAC territories have their own money to spend on favorite brands and they regularly receive significant cash to spend as they choose. Snacks, drinks, toys and confectionery were kids’ top-four favorite items to purchase, respectively. Snacks was also the leading category across all markets.