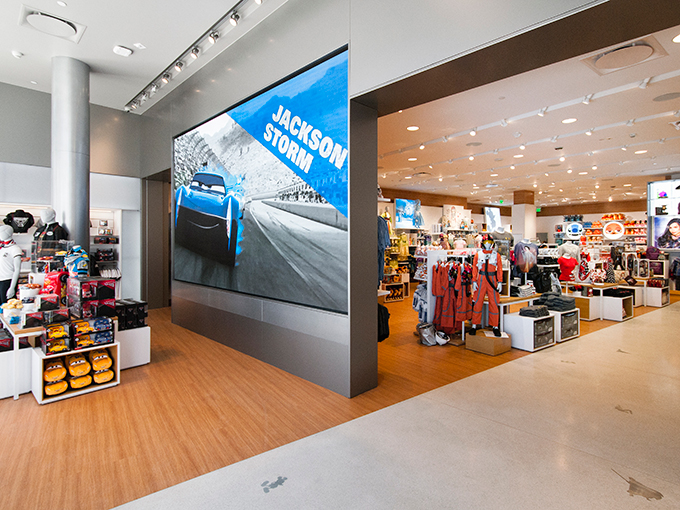 The House of Mouse has rolled out a new e-commerce site and prototype for a new Disney Store design that's centered around boosting customer experiences.

Disney is looking to boost sales within its Consumer Products and Interactive Media unit with two new interactive-based retail strategies. The House of Mouse has rolled out an e-commerce destination entitled shopDisney.com, while new on-site interactive experiences are being tested at select Disney Stores worldwide.

The in-store experience is rolling out at a few locations—including California, Japan and China—with more prototypes opening this year in Miami and Munich. The new stores feature products for guests of all ages beyond child-centric CP, and also sport a new layout designed to be light and contemporary. And in terms of being more modern, the new Disney Stores will include digital elements like giant LED screens that live stream Disney Parks parades every day, as well as digital fireworks displays.

On top of that, Disney cast members and characters will spend time with shoppers in interactive experiences including opening the store each day with a welcome celebration, learning and play activities in the stores’ new play room, and personalized celebrations for any guest.

As for shopDisney.com, products are aimed to draw in more Gen Z and Millennial shoppers with categories that run from trend fashion and accessories, to toys and collectibles. The site will also feature a range of hard-to-find Disney Parks merchandise, as well as “create your own” customizable products.

Co-branded items from Coach, Le Creuset, Spyder, Steiff, rag & bone and more will also be available on shopDisney.com. The website’s new “The IT List” section will feature new exclusive capsule collections from fashion-focused brands, and will kick off with denim from SIWY featuring Mickey and Minnie Mouse, as well as Disney Princess and Villain nail wraps from NCLA.

The move to play up its parks—both in-store and online—comes as Disney’s Parks and Resorts revenue continues to grow. The division increased by 9% to US$4.3 billion in Q2 2017, with operating income up 20% to US$750 million. Strong sales at Shanghai Disney Resort and at the company’s US theme parks have helped deliver strong results. Meanwhile, Disney’s Consumer Products and Interactive Media revenue fell by 17% to US$1.3 billion in Q4 2016, and dipped by 11% to US$1.1 billion in Q2 2017.

While the company’s CP strategy has entailed more interactive in-store experiences like its second Force Friday event earlier this month (after 2015′s inaugural Force Friday inspired Star Wars to become the number-one toy property in the US for 2015 and 2016, according to market research firm The NPD Group), a Disney Store redesign hasn’t taken place in nearly a decade. The last major redesign for the retail chain was in 2010, which launched in 20 major markets and featured a small castle for the princess section. The company’s first Mainland China store opened in 2015, and will now be one of the new prototype stores.