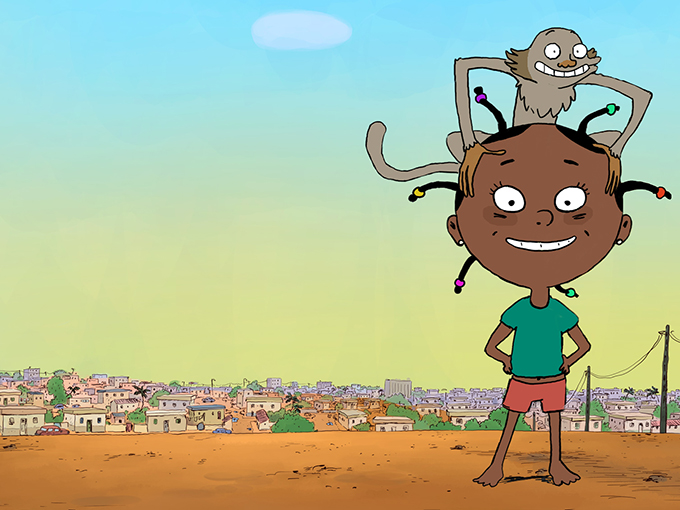 Among the promising new properties at this year’s event is Akissi, a comic book adaptation based on the childhood of Ivorian writer Marguerite Bouet.

You know a pitch is strong when it elicits multiple laughs—even if you’re sick and groggy from cold meds. Such was the case yesterday with Moka from French studio Xilam Animation (Oggy and the Cockroaches).

Though reduced to a sniffling, sneezing mess (sorry everyone), my situation, ironically, forced me to focus harder on the special elements of projects that that really make them tick. For Moka, it was the quiet, perfectly-timed beats between the comedic moments of the characters, whether in passing conversations or during big action set pieces, that got my attention.

The 78 x seven-minute 2D-animated comedy follows the wild adventures of a naїve, young crocodile king, Moka, who must learn to get along with a brave rhinoceros that’s tasked with protecting the pint-sized croc on his journey to explore the kingdom. Created by director and storyboard artist Andrès Fernandez (Oggy and the Cockroaches) and artist Maxence Sani (Zig and Sharko), the series also excels in how it presents empathetic characters—an aspect of kids programming that’s growing in demand by today’s young audiences.

Another miniature animal character that made a big impression on day two was Everest the toy elephant of Elle & Everest from first-time Forum attendee Lawrence Hadley Buck, one of six UK prodcos attached to projects this year. Based on the children’s book by author Spencer Buck and collaborator/illustrator Sam Hadley, the 26 x seven-minute preschool concept comes from the book’s creators and licensing industry vet Sarah Lawrence.

A number of industry producers and distributors gave the project their seal of approval, including Collingwood and Co’s Helen Stroud, Futurumkids’ Francis Fitzpatrick and Cyber Group Studios’ Pierre Sissman, who offered to take the series to 52 eps as a co-producer and sign on to distribute.

As for other standout pitches, one of the best came during the day’s final timeslot. Akissa (pictured) is a 78 x seven-minute 2D-animated series based on the bestselling French-language comic book series of the same name by Ivorian author Marguerite Abouet (Aya), who was raised in the Ivory Coast and moved to France as a tween.

Produced by Sean Angelin of French prodco GHWA, the series follows the mischievous adventures of an unpredictable West African girl whose urban neighborhood life with her family and friends is anything but dull. The project arrives following a new report from global children’s publishing powerhouse Scholastic that found that more US kids ages six to 17 are interested in reading stories about different races, cultures and faiths, though there is a disconnect in terms of access.

On the programming side, work is also being done to produce more inclusive stories for television and digital platforms.

For Sebastian Debertin of KiKA, the breadth of content that can be discovered at Cartoon Forum remains a key business driver for the German kidcaster. “Cartoon Forum is always a must-attend event. The mixture of people, storytelling, companies and designs here is so unique. Up until last year, the total number of projects found and financed by KiKA (excluding ARD and ZDF) at Cartoon Forum was 42,” Debertin says. “It shows that even a smaller broadcaster in terms of budgets can really find the right properties here for co-development or acquisition.”

In terms of finding content across age groups, Debertin says this year’s crop of projects leans more toward preschool. “Again, to my surprise, the market still skews very much toward younger audiences. There is still a need for shows that are six plus,” he says.

“We identified two in the six-to-11 range. For me, Stinky Dog from Dandelooo and Panique! is a clever show. It’s very Parisian, but it’s a show that German kids will also love because it has very charming characters that you like to follow and are funny,” Debertin adds. “I’d also love to find comedies that are similar to shows like Garfield and Masha and the Bear. Thorgar from Collingwood & Co was also interesting and is something we could pick up.”