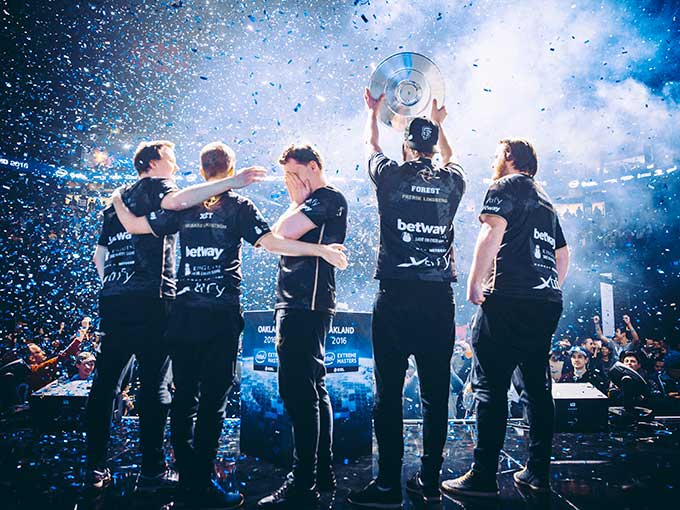 eSports and kids: Welcome to the big league

eSports is attracting media players like Disney and Nickelodeon—but which has the upper hand when it comes to kid audiences?

Two days. Bright lights. 100,000 screaming fans. All the elements of a full-blown rock festival are in play at a typical ESL eSports tournament—but think joysticks instead of guitar picks, and Mod Skins over mosh pits. This is the world of eSports today, where millions of young, fervent fans spend 40 minutes per session on streaming Twitch and Facebook Live watching professional gamers cross controllers in League of Legends and Dota 2.

Meanwhile, thousands of kids are gathering at movie theaters around the globe to partake in amateur-level tournaments featuring games like Minecraft and LEGO Dimensions. As eSports fandoms, ad dollars, promotional campaigns and streaming deals have been on the rise over the past three years, the corporate world is now gleefully drinking the digital Kool-Aid, allowing for content and competitions to reach broader demos and new monetary heights. It’s validation, undoubtedly, that Disney, Nickelodeon, Warner Bros. and traditional sports teams are stepping up their competitive video gaming efforts—but they may need eSports more than the other way around.

“eSports is the biggest overnight success story,” says Craig Levine, CEO of ESL North America, whose independent eSports outlet hosts competitions that range from minor local tournaments to big-arena events. “It’s a diverse combo that works when you mix ticket sales, sponsorships, merchandising and advertising, which all go into making a successful event. We are growing 30% to 40% year over year in terms of revenue, and are seeing huge jumps in viewership. But the business model is still evolving.”

Levine says ESL’s large-scale events (its Intel Extreme Masters World Championship 2017 in Katowice, Poland attracted 173,000 fans over the course of two weekends) are streamed live on Twitch, Facebook and Twitter, where analysts weigh in as top professional gamers compete on platforms including Sony Playstation, Microsoft Xbox and PCs. And kids and teens want to be in the middle of the action. According to New York-based market research firm SuperData, 20% of US kids ages 13 to 17 watch eSports up to three times per week, and are attending eSports events once every nine weeks.

The rising interest in eSports commentary led Disney XD to pick up two ESL-produced series—Speed Runners and ESL Brawlers—for its D|XP summer gaming block. Hour-long Brawlers focused on Capcom’s Street Fighter V players, while Speedrunners featured multiple games with players racing against the clock to complete them in the shortest amount of time. “We have broadcast successful arena events [online], but the Disney shows were a different format that required a mainstream lens,” says Levine. “Disney had identified eSports as an important genre for this block, and then contacted partners like us. We’ve been building ESL for over 16 years. But to have Disney identify this genre, and us within it, is exciting.”

Still, in terms of ESL’s online streaming numbers (its Poland championship reached 46 million online viewers, for example), Disney is playing some catch-up. “They haven’t really understood the popularity of eSports. And our shows have presented a big opportunity to accelerate things,” says Levine. “eSports has an easy entry point; unlike traditional sports, kids can be any size, shape, gender and race. It’s the ultimate meritocracy.”

“As the largest media conglomerate, Disney offers reach and touch unlike any other media partner,” says aXiomatic CEO Bruce Stein. “But this audience is fanatical about authenticity. If things feel overly commercial and not true to the games and IP, the audience will know.”

According to Stein, today’s eSports audience is highly active and equally as narrow, largely comprised of 15- to 35-year-old males. “We think there are enormous opportunities with other demographics like young kids, in addition to hardcore gamers,” he says. “Having a partner like Disney will bring real efficiency to our expansion efforts. We are interested in utilizing ESPN and other properties that are part of Disney. And a year from now, amateur leagues are going to give fans of video games a huge alternative to traditional sports.”

The already burgeoning growth within amateur eSports gaming leagues stems from Generation Z’s desire to share a form of entertainment and expression in a public way, according to SuperData CEO Joost van Dreunen. “It has everything to do with what kids want to do in their downtime,” he says. “Amateur events have become a place of passion and a natural outgrowth of gaming.”

van Dreunen’s firm has analyzed the eSports market for more than a decade, but the last three years have marked a significant change in terms of popularity and reach. “Players have always been competing with each other, but it was always a fringe thing to do. The digitalization of games created a new revenue model,” he says. “With 100 million monthly active users, League of Legends is free to play with upgrades, and
eSports plays a function of this with direct links to watch videos of professionals playing it. It’s a marketing tool that allows publishers to reach millions outside of the game.”

For better or worse, an influx of corporate dollars is going to take the eSports landscape to more facets of the entertainment world. “Is it going to make eSports super-popular? Or grow organically? Or do a little bit of both?,” van Dreunen asks. “The emphasis should always be on the fans. Parents don’t want kids being sold US$50 shirts and overpriced popcorn. Companies must lay off the corporate agenda and make it all about the players. That’s the strong way to move this forward.”

To the extent that kids TV nets are acknowledging the sect, van Dreunen says linear television will make eSports content more narrative by nature.
“But TV needs eSports more than eSports needs TV. Why? Because TV is losing audiences, traditional sports league viewers are aging up, and there’s a new generation of kids and teens that doesn’t even have cable,” he says. “Traditional channels are having trouble reaching this younger cohort. eSports is a way of trying, but the industry has the upper hand.” The fact that eSports is being considered as a medal event for the 2024 Olympic Games substantiates van Dreunen’s point, as the International Olympic Committee looks to court younger viewers in the wake of NBC’s 21% drop in linear viewership in 2016.

For Amateur eSports companies like Super League Gaming (SLG), conquering the world stage is being done one big screen at a time. The company hosts in-theater gaming events that draw kids and teens to face off—and collaborate—using games like Minecraft. “There are 2.6 billion gamers worldwide. This is such an unbelievably large group of people who can’t always find like-minded gamers to connect with,” says Ann Hand, CEO at SLG. “We fill the void in a social sense. You get good at tennis by hitting a ball against the garage door, but build real skill and character as part of a team.”

SLG establishes local city teams (the company has a dozen in North America, such as the L.A. Shockwaves) and forges commercial partnerships with movie theater operators. Kids compete in online city competitions, and the best players are selected to play in theaters at regional competitions. For example, more than 15,000 kids participated in the company’s 2016 Minecraft event that spanned 70 venues. “That was just live,” says Hand. “Our online reach is even bigger.”

Perhaps that was the selling point for Nickelodeon. In June, the kidsnet led a US$15-million Series C investment round in SLG, together with DMG Entertainment, Toba Capital and aXiomatic, among others. “We are excited about our Nickelodeon relationship. It’s all about brand awareness, and they are already promoting us across their channels,” says Hand. “Nickelodeon came to our events and saw what we see—enthusiasm. The diversity factor was big for them, too. Kids are themselves, whereas traditional sports may not be their thing, at SLG events they are able to wear jerseys and be proud.”

Like aXiomatic’s Stein, Hand says mainstream media has the ability to widen eSports’ reach even further, if done authentically. (Currently, SLG event attendance and online participation is split 65% male and 35% female.) “It’s early days, but we think there are tons of opportunities to extend our content. Nickelodeon wouldn’t make an investment if it weren’t strategic for them and used across their properties,” Hand says.

For SLG, the next six months will be spent extending its platform beyond theaters and into local retail outlets and school tournaments. The company will also expand its footprint to four more cities, while getting into live-streaming its local events. “Advertisers want to get closer to everyday gamers, and broadcasting our live events offers more ways to distribute and monetize things,” says Hand.

At Warner Bros. Entertainment, in-theater competitive gaming events are less about ROI and more about brand awareness. Through an ongoing partnership with Canadian movie theater chain Cineplex and World Gaming, WB has been hosting LEGO Dimensions competitions across the country that accommodate up to 300 viewers and participants. The initiative launched in November 2016 featuring competitive split-screen gameplay for four players, who compete in matches in such worlds as Adventure Time, Ghostbusters, Harry Potter and Sonic: The Hedgehog.

“While I can’t share exact numbers, our LEGO Dimensions events have been more successful out of the gate than our more traditional, adult-oriented eSports in-theater games,” says Aksel Lielmanis, executive director of marketing at Warner Bros. Home Entertainment. “I think it’s because this is unique in Canada, and a great way for families to get involved.”

Lielmanis says while there are throngs of passionate LEGO Dimensions fans, it isn’t a digital game, so there haven’t been many opportunities in the past to bring them together face-to-face. And with Warner Bros. not benefiting monetarily from event’s free admission policy (actual players shell out US$50 per season to compete), the LEGO Dimensions initiative is about fostering long-term relationships with fans. The strategy falls in line with a US kid-oriented amateur league annual marketing spend of roughly US$10 million to $15 million, according to SuperData. “It’s a marketing initiative first and foremost,” Lielmanis says. “And our US team is paying close attention to how our experience goes.”