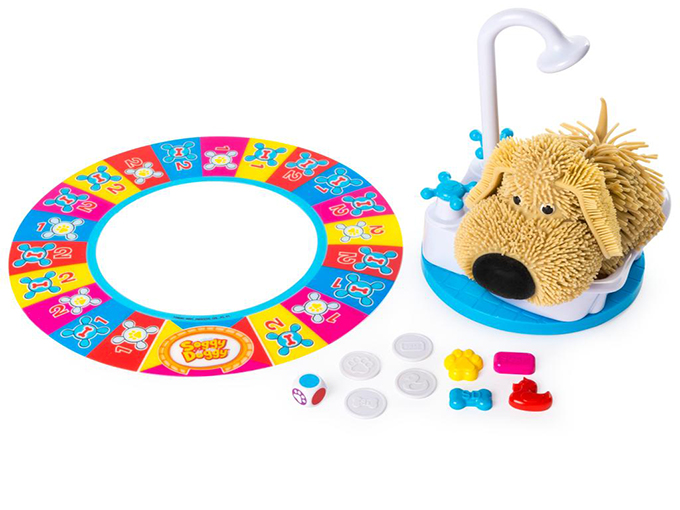 Collectibles, droid-maker kits, ride-ons and products based on Paw Patrol are among Walmart's Top 25 Rated by Kids toy list for this year's upcoming holiday season.

In the lead-up to 2017′s holiday shopping season, Walmart has predicted this year’s most coveted playthings—all thanks to a panel of kid experts. Hundreds of children ranging in age from 18 months to 12 years old have determined that collectible toys—including Hatchimals Surprise, L.O.L. Surprise Fizz Factory and Fingerlings—will be big hits over the holidays.

For interactive toys and products that fuel kids’ creativity, littleBits’ Star Wars Droid Inventor Kit made the cut along with FurReal Friends Roarin’ Tyler, Soggy Doggy Board Game (pictured) and Mayka Toy Block Tape from Zuru Toys. (littleBits’ Droid Kit made a splash last week, when it was announced as one of the key releases on Force Friday II.)

Spin Master’s Soggy Doggy Board Game, meanwhile, is notable because it capitalizes on both the interactive tech toy trend and the growing demand for physical board games. Mayka, for its part, is expected to sell well based on its compatibility with LEGO bricks, Kreo and all other leading toy block brands.

As for toys that keep kids active, the list features a number of Walmart exclusives including Frozen Sleigh, Monster Jam Grave Digger and VTech’s Pop-a-Balls Drop and Pop Ball Pit. In fact, nearly a quarter of this year’s list is exclusive to Walmart.

In total, Walmart will be offering more than 1,000 new toys, including more than 300 exclusives in-store and online. Other popular categories will include virtual reality items, drone toys, video game systems, video games and a large assortment of Star Wars-licensed toys in support of the December 15 premiere of Star Wars: The Last Jedi.