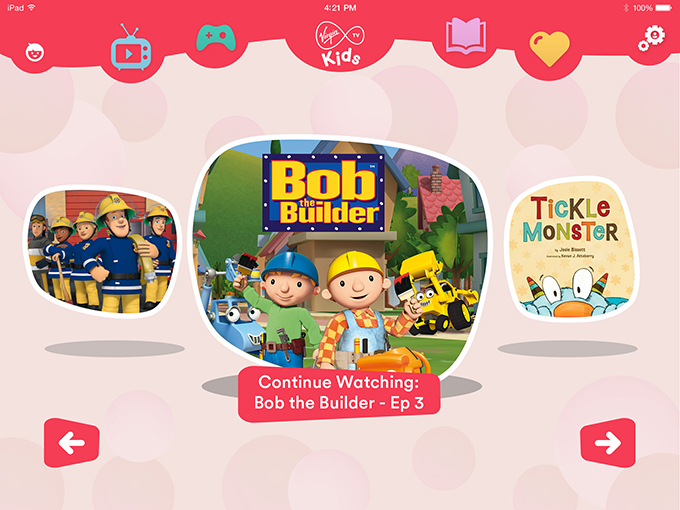 UK pay-TV operator Virgin Media has released Virgin TV Kids, a safe, dedicated iOS and Android app for preschoolers featuring a carefully curated selection of popular on-demand programs from the likes of Viacom, Turner and Disney, as well as interactive games and books.

The app, available to all Virgin TV subscribers on the network’s Fun and Full House bundles via free download from the Apple App Store and Google Play, is devoid of advertising and in-app purchases. It offers thousands of episodes of kids programming from Virgin channel partners including Boomerang, Cartoonito, Disney Junior, Tiny Pop, Milkshake!, Nick Jr., NickToons, Tiddlers TV, VTV Kids and ZooMoo, along with an expansive book library and 14 interactive games. Its unique “repeat” button lets kids watch the same episode of a show five times in a row, and parental settings allow for offline viewing, as well as usage history of games, books and TV shows.

According to David Bouchier, Virgin Media’s chief digital entertainment officer, the decision to launch Virgin TV Kids was driven by the fact that preschool is a key component of the pay-TV value proposition, given that a significant chunk of Virgin’s roughly 40% of subscribers with children under 16 are, in fact, preschoolers.

“It’s also about exploiting and developing the unique position we have as a platform with the best content partners in Viacom, Turner and Disney,” says Bouchier. (Virgin renewed its multi-year programming deal with Viacom in the UK and Ireland in October 2016. Part of that deal brought Viacom-owned Channel 5′s preschool programming block Milkshake! to the operator a month later, along with access to Viacom’s mobile streaming apps Nickelodeon Play and Nick Jr. Play. Virgin also extended its long-term content deal with Turner in November 2016.)

Other reasons for the release, according to Bouchier, include Virgin’s need to follow its increasingly on-the-go, tech-savvy younger audience that’s demanding content across every screen. He points to the app’s ability to provide offline downloads as a key component for serving this demo.

As for competing with established products in the region like the Sky Kids app, Bouchier says Virgin purposely designed an app dedicated to preschoolers from the get-go to help it stand apart. “We have a lot of respect for Sky and how they operate, but their strategy is different from ours,” he says. “We deliberately did not try to create a soup to nuts, big age group kids app because we would alienate the older kids, not engage the younger ones and potentially expose preschoolers to inappropriate programming.”

Among the shows debuting on the app are Bob The Builder, Mike The Knight, In The Night Garden, Thomas & Friends, Peppa Pig, PAW Patrol, Masha and Bear, Scooby Doo, Tom and Jerry, Monkey See, Monkey Doo and Angelina Ballerina. (Content will be refreshed monthly.) For its book library, the app features Monsters Love Underpants, three Princess Evie’s Ponies titles, Dogs Don’t Do Ballet, Barry The Fish With Fingers and No-Bot, the Robot with No Bottom, to name a few. Its games include Playful Kitty, Bubble Gems, Kids Tangram and Doctor Teeth.

“It’s very difficult in the current media environment to try and be the one place for everything. We do know that if you build a fantastic proposition, you’ll get your audience,” Bouchier says. “With Viacom, they have created complementary streaming environments, so why wouldn’t we offer those to our customers? Nickelodeon Play allows us to hit all the other demos and maximize the investment that they bring.”

“Bringing Sarah in was a very good move to strengthen Pete’s team in the area of kids and get a dedicated head for that area,” says Bouchier. As Virgin grows its kids business across screens, the operator may soon invest in original commissions to help keep pace with Amazon and Netflix.

Bouchier, however, says the biggest challenge going forward is getting more subscribers to pay for TV. “In the UK, we have exactly the right brand, market position, product and triple-play, quad-play offer, but we need to ensure we keep delivering the value proposition. To get people to pay for TV is always the challenge,” he says.