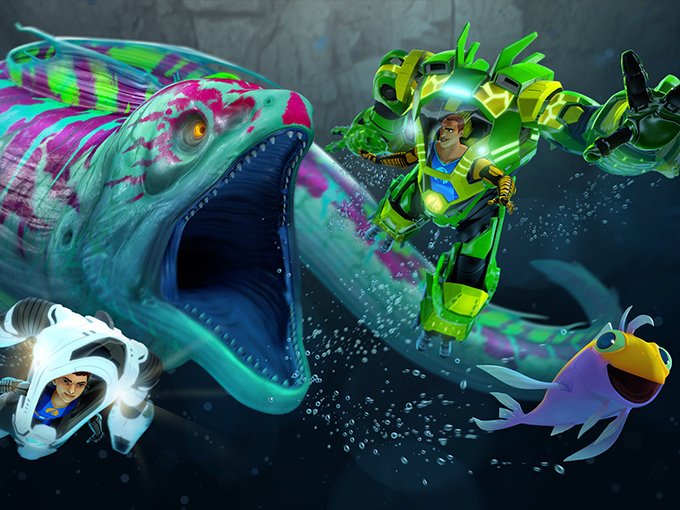 Interactive experiences co-developed by Technicolor and Merlin Entertainments have launched at UK aquariums, while DHX has released the IP’s first app.

Paris-based Technicolor has secured a deal with Merlin Entertainments to bring interactive experiences based on the underwater adventure series The Deep to more than 20 Sea Life aquariums in the UK and Germany.

The events debuted in the UK this past weekend and will roll out through November 2017 at multiple Sea Life locations. The German launch will follow in October. Kids can become honorary members, or Junior Nektons, of the show’s famous underwater-exploring family by searching branded zones within the participating aquariums.

Meanwhile, on the digital side of the brand’s CP program, Canada’s DHX Interactive launched The Deep: Sea of Shadows for iOS and Android mobile devices last week in multiple territories, in both English and German.

The Sea Life and app extensions both coincide with the debut of the second season of The Deep, which launched in July on CBBC and will premiere in Australia today on ABC Me.

DHX Media, which handles distribution for the CGI-animated program, recently signed 16 new broadcasting deals for season two to countries across the globe, including the US (Universal Kids), Finland (YLE), Greece (Nickelodeon) and Russia (Multimania). The toon is co-produced by Australia’s A Stark Production, DHX Media and Technicolor, and the latter holds underlying rights to the property. DHX Media-owned CPLG is the property’s licensing agent in North America, EMEA (excluding Germany) and Latin America.

In related Merlin deals, Zodiak Kids partnered with the company in March 2016 to bring Mister Maker arts & crafts activities to 12 Sea Life centers in the UK and Ireland.

The aquarium partnerships come as kids brands are increasingly turning to interactive experiences as part of their 360-degree consumer products strategies. Lego’s World of Creativity tour, which will make five US stops this summer before expanding in 2018, is one of the more recent examples.