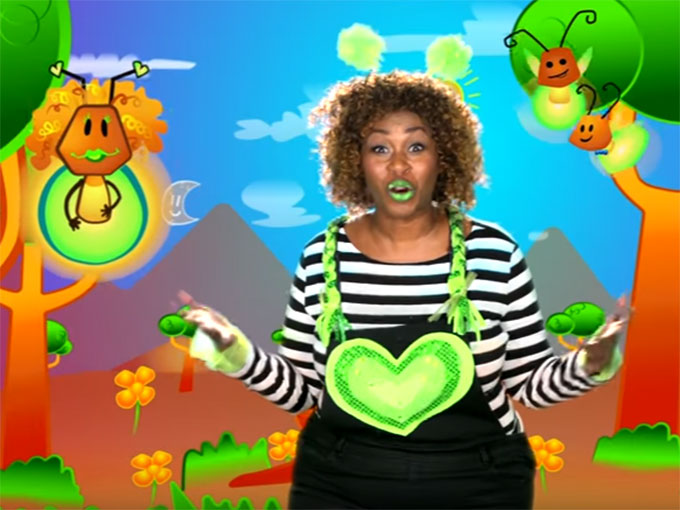 Together with Bunim/Murray Productions, popular YouTuber GloZell opens up about expansion plans for her new online preschool channel.

The production company known for creating shows like Keeping Up with the Kardashians and Real World is now going green—at least creatively speaking.

In its first series of moves into online kids content, Bunim/Murray Productions has partnered with GloZell Green—the celebrity YouTuber best known for wearing bright lipstick and her cinnamon challenge video that racked up 50 million views and counting. The new GloBugz channel launched its colorful mixed-reality world on July 24 with 15 short videos produced by Bunim/Murray, Patty Ivins from PB&J, Green and her manager Nidhi Lucky Handa.

The live-action/animated videos, which will be released weekly on YouTube and the YouTube Kids app, follow a costumed Green in front of a fantastical animated backdrop. It uses typical children’s nursery rhymes like Mary Had A Little Lamb and Old McDonald Had a Farm to engage and teach kids, and commenters are already making requests for new videos on days of the week, seasons and more basic facts for babies and toddlers to learn through songs and bright colors. The show is aiming to be educational, given that Green has a Bachelor’s degree in musical theater from Florida State University and her mom was a public school teacher for more than 30 years.

Ivins originally proposed the series after booking Green as a guest on the Oprah Winfrey Network show Flex and Shanice. After that, she brought Green to Gil Goldschein, CEO of Bunim/Murray, who was already looking for digital talent in the hopes of combining his production skills with YouTube’s wide viewership.

“I was really blown away by Green’s talent,” says Ivins. “I’ve wanted to work with her, and when I was speaking with her a couple of months back, she expressed this dream of working in the kids space, which really aligned with our goals of using our skill set and our resources to grow a new brand.”

Ivins used to be a producer at Bunim/Murray before launching PB&J with Julie Pizzi. The production company includes shows in its roster like TLC’s Reality Check andNBC’s Sports Illustrated: Swimsuit Model Search. PB&J was recently brought back into the fold by Goldschein, after having spent the past 12 years as an indie, and now serves as a production arm of B/M.

While it was Ivins’ recommendation that got Goldschein on board, it was Green’s fan base (and her nearly five million YouTube subscribers) that was alluring in its own right.

“Organically, GloZell’s fans live on YouTube, which is another reason why she’s such a phenomenal partner. She’s part of the original YouTube personalities with fandom and superstardom,” says Ivins. “I think there’s a real opportunity for older viewers who already adore her to bring their children alongside and look at a talent they know and trust.”

Green also thinks her large network of fans will be what makes her channel and series really take off.

“I think originally what’s going to draw eyeballs to it is that I’m a part of it and a lot of people already know who I am,” says Green. “Whenever I go out, I have fans that are very young that come up to me because their older brother or sisters are watching me…so they recognize me.”

While there’s no shortage of YouTube content creators out there, Ivins didn’t think anyone else would be able to parlay their success into a kids show quite as well. She also says there aren’t a lot of kids show on YouTube that have a celebrity of any kind fronting the series, which will help it stand out in the crowded content space.

Though it’s early days, the production partners are not stopping with YouTube, and are already looking at where the GloBugz brand can go next.

“I think we’re committed to this as a destination on YouTube, but because there’s so much opportunity in the kids space, it could grow into a more premier fare for a different network or something that could tailor to a network’s agenda,” says Ivins. “I also think there’s an opportunity for a scripted animation show with the GloBugz themselves telling a story, maybe even telling a story based on [Green]‘s book Is You Okay? So there’s just a lot we can do with it.”

Before that can happen, Ivins says the series will stand on its own through the use of YouTube ads and brand partnerships. GloBugz is currently considering possible brand partnerships that will integrate well into the show. (Think a major retailer at Halloween that has sponsored craft supplies.) The team is also looking at potential licensing opportunities for further extensions down the road.