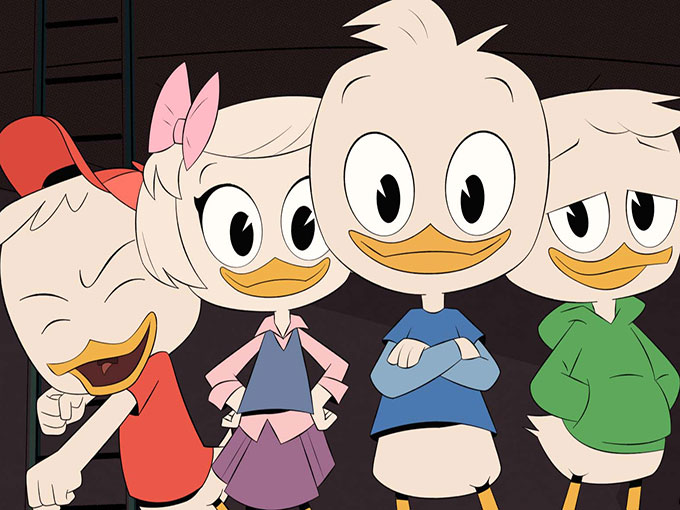 As Disney XD readies its DuckTales reboot, the brand’s biggest fans are leading the charge.

In the age of reboots and reconnections, mining inspiration from the ’80s and ’90s has become a common reality for the House of Mouse. But for DuckTales producers Matt Youngberg (Ben 10: Omniverse) and Francisco Angones (Wander Over Yonder), the idea of bringing Scrooge McDuck back to the small screen came from a particularly heightened place of passion.

“The lyrics from the original DuckTales theme song were in my wedding vows, and I dressed up as Dark Wing Duck as a child through to adulthood,” says Angones, who serves as co-producer on the upcoming Disney XD series. “You can say that I have an intense personal love for this property.”

“We didn’t think, ‘We really need DuckTales because it’s going to fill some slot somewhere’,” adds executive producer Youngberg. “The reason that it’s coming back now is because all of the people who grew up loving it so much are saying they want to see it again.”

The long-awaited, small-screen revival will kick off with a one-hour TV movie, aptly entitled Woo-oo!, which will be played on loop for 24 hours on August 12—three decades after the first DuckTales episode aired. The show’s inaugural two episodes will then make their linear TV, mobile and VOD debuts in the US on September 23, before eventually rolling out on Disney XD and Disney Channels worldwide.

The series follows Scrooge McDuck (Doctor Who‘s David Tennant), Donald and a fleet of young ducklings as they travel the globe in search of
riches. (One of the show’s most iconic scenes features Scrooge diving into his money pit, and Disney has created a functioning life-sized version to bring to promotional events.)

With the DuckTales universe spanning classic Donald Duck comics by Carl Barks, the original Disney series and 1990 feature film DuckTales the Movie, Youngberg and Angones almost had too much material on their hands. “We wanted to cram so many ideas in at once,” says Angones. “Everyone has his own distinct take on things, which calls for a lot of juggling and finessing.”

Among the duo’s creative decisions was the move to animate the series in a 2D hand-drawn style. “It made more sense to go traditional with this show rather than do a full CGI reboot,” says Youngberg. “I wanted to make sure it had this real hand-drawn authenticity to it. We are doing something new for today’s kids, but at the end of the day, all of these characters are older than us and are going to live well beyond us.”

The show will have some contemporary updates, though, particularly in its portrayal of families. The creators say they drew inspiration from hits like Modern Family and The Incredibles, which focus on complex atypical family dynamics.

In terms of further relating to a whole new audience, a DuckTales: All Ducked Out! avatar creator will launch this summer on the Disney XD and Disney LOL apps, while Donald will be featured in Rovio’s original Angry Birds in August.