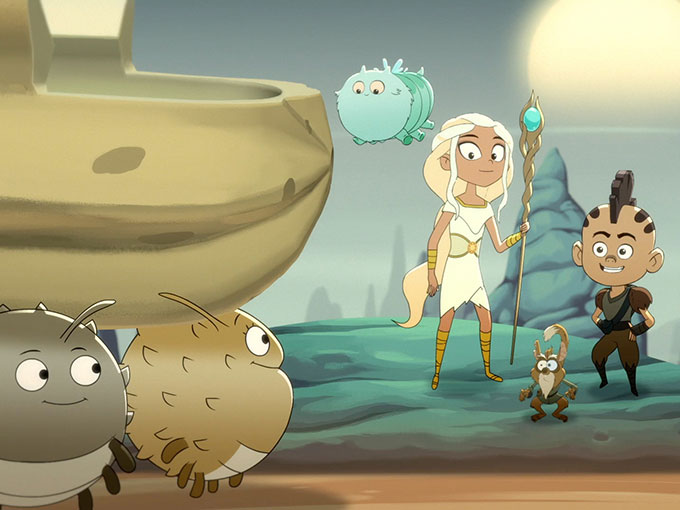 Inside crowdfunded motion comic Niko and the Sword of Light on the heels of its Amazon Original series debut.

Looking to create something completely out of the box, Imaginism’s Bobby Chiu and Kei Acedera—both character designers for Tim Burton’s Alice In Wonderland—joined forces with Studio NX animation directors Jim Bryson and Adam Jeffcoat in 2013 to make fully animated, original motion comic book app Niko and the Sword of Light. Targeting kids ages six to 11 and inspired by fantasy properties like The Lord of the Rings, the story is about Niko, the last of his kind living in a strange, magical world that’s overrun by an evil darkness. After finding a magic sword forged by gods, Niko embarks on an epic journey to the Cursed Volcano, making new friends—and enemies—along the way.

Using crowdfunding platform Kickstarter, the project reached its funding goal of US$25,000 by the end of summer 2013. Once the app was released that fall, it quickly hit number one in the kids nine to 11 category on iTunes in more than 30 countries, including the US, the UK, China, India and Brazil. According to Chiu, that was when Melissa Wolf, Amazon Studios’ development exec in kids animation, reached out to the creators.

“The comic book has 22 minutes of animation, so part of our strategy from the beginning was to hopefully turn the app into a TV series,” says Chiu. “It’s no coincidence that 22 minutes is the same amount you want for an animated cartoon episode/pilot.” In 2014, Amazon gave Niko the greenlight for a kids series pilot and brought seasoned writer/producer Rob Hoegee (Teen Titans, Thunderbirds are Go!, Abby Hatcher) into the mix as showrunner, head writer and executive producer. L.A.-based Titmouse (Hanazuki Full of Treasures, TURBO Fast) was also hired to animate the series, which in 2016 became the first Amazon Original to win an Emmy (Best Children’s Animated Program) for its pilot before the series fully launched.

“Winning the Emmy was pretty surprising because it’s a little unusual to put up a pilot, but we felt it was something really special and certainly deserving of recognition,” says Hoegee. “More importantly for me, we have a show with a joyful, adventurous spirit. While the world of the show is literally painted in darkness, our hero is one of fun, wonder and whimsy.”

With the unwavering belief that Niko would make a fantastic TV series, Amazon ordered a 13 x 22-minute season last year. “It’s been quite a journey, but Amazon has been a terrific creative partner. We get a lot of notes asking questions, but it’s always in a collaborative spirit. Their mandate is making good television, and it shows,” says Hoegee.

“The biggest challenge is that it’s a wholly original series,” he notes. “In very short order, we had to create an incredibly rich universe basically out of thin air. And we’re doing serialized storylines, so not only do we have to plan out every episode in advance, we also need the backstories and the intricacies of the world built out.”

One of the biggest changes was the addition of a co-lead named Princess Lyra, who is voiced by Kari Wahlgren (OK K.O.! Let’s Be Heroes). According to Hoegee, when the producers focus-tested the pilot, one of the things that the audience said was missing was a companion for Niko. “She’s a guide and mentor for Niko, and along the way she ends up learning and growing a lot in her own right,” says Hoegee.

Niko and the Sword of Light made its Amazon debut on July 21. The co-producers are also in the early planning stages for a second season, as well as consumer products, tie-ins and publishing. One of the first IP extensions will be an Amazon-published 20-page comic book to be distributed at San Diego Comic-Con. “Because Amazon owns digital comics company ComiXology, they certainly have some credibility in that world,” says Hoegee.

Amazon, amazon originals, Niko and the Sword of Light