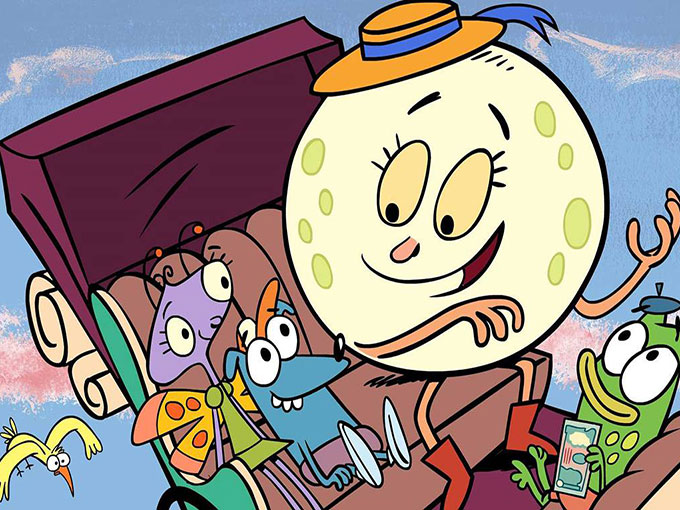 The US pubcaster has commissioned 9 Story Media Group's latest toon for 2018 and is reversioning WGBH's Ruff Ruffman for its digital platforms this fall.

It will debut across the US on PBS stations, the new 24/7 PBS KIDS channel and PBS KIDS various digital platforms. The series is built around a social studies curriculum for kids four to seven and is aimed at helping them to appreciate cultures from all over the world and build global citizenship skills.

Currently, 38 half-hour episodes and a one-hour special are in production. Each episode will include two 11-minute stories, as well as interstitial content that features live-action segments about arts and culture and animated folktales and songs.

Luna Around the World follows three friends–an Aussie wombat, a Mexican butterfly and an American frog that travel the world with their parents’ performance troupe. Luna the moon acts as their guide. 9 Story Distribution International is managing the distribution and merchandising rights for the series worldwide outside of Canada,

The new show will also offer supporting digital content, including corresponding games at pbskids.org and on the free PBS KIDS Games App, along with clips and full episodes. A themed app will also launch after the series’ debut.

9 Story and PBS KIDS have worked together before on several series, including  Daniel Tiger’s Neighborhood, Peg + Cat, Wild Kratts and Nature Cat.

PBS KIDS has also announced the return of fan favorite Ruff Ruffman. The canine host is making a comeback in the 20-ep digital series The Ruff Ruffman Show. Created by PBS affiliate WGBH Boston, the series will premiere on September 28 on PBS KIDS digital platforms and on and PBS KIDS’ YouTube channel.

Originally called Fetch! With Ruff Ruffman, the linear series ran for five seasons (2005 to 2010) before ceasing production. The new short-form animated digital version will focus on teaching science concepts through videos, games and hands-on activities. The show follows Ruff and his two assistants who answer questions from real kids and take on science challenges.

Related games will be available for free on the PBS KIDS Games App and pbskids.org, and a Ruff Ruffman app is in the works.