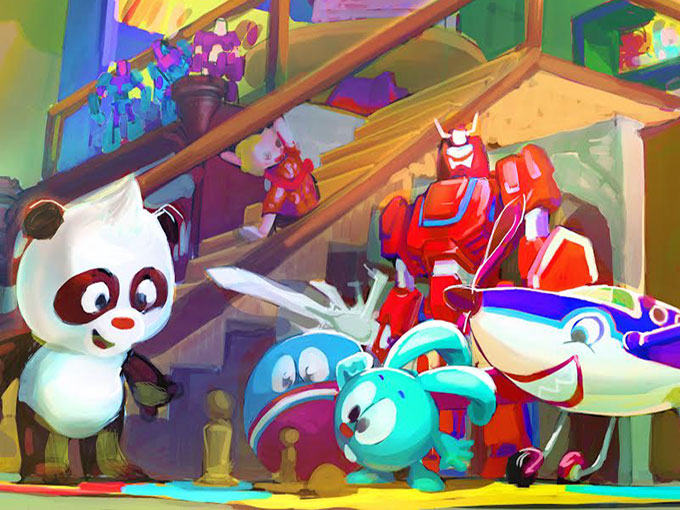 The Hong Kong- and Moscow-based partners have signed a co-pro deal for the new animated series Krash and Hehe, which will premiere in China in 2019.

Hong Kong-based content creator and global distributor Fun Union has signed a co-production deal with China Central Television (CCTV) Animation and Russian multimedia company Riki Group for a new animated series entitled Krash and Hehe. Aimed at six- to 12-year-olds, the 52 x 11-minute series will be made in 3D CGI with 2D inserts, and will bow on CCTV Kids in early 2019.

The agreement—which was signed during a state visit led by Chinese president Xi Jinping in Moscow—will see Fun Union finance the project.

Krash and Hehe takes place in a toy store and follows the adventures of playthings when they come to life at night. The show stars Krash from Riki Group’s series KikoRiki, as well as Panda Hehe from CCTV’s programming. The former has already made its mark in China, where KikoRiki and PinCode air on CCTV Kids. (Fun Union’s preschool program BabyRiki is slated to launch on digital platforms in China on July 8.)

CCTV has a network of 50 channels and is accessible to more than a billion viewers. Earlier this year, BBC Worldwide sold CBeebies series Go Jetters to the broadcaster, where it is airing fully dubbed in Mandarin. On top of its linear TV debut, the show is available on the CBeebies block on online platform iQIYI and the IPTV platform BesTV. In August, the series will bow in China on digital platforms Tencent and Youku.