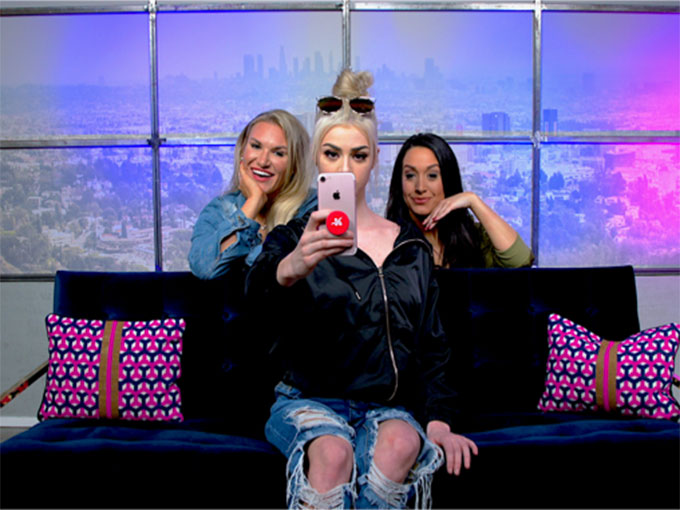 Sweety High CEO Frank Simonetti says he launched his company’s new show on live.ly because of the big potential real-time TV has to draw young audiences.

With 70,000 Gen Z girls tuning into musical.ly’s TV platform every weekday to watch Sweety High’s modern-day variety show, After the Bell, the L.A.-based media company is one that stands to thrive from being live. Sweety High specifically targets tween and teen girls with live-video formats, and has found significant traction on live.ly, musical.ly’s one-year-old video-streaming app that had 4.3 million users as of September 2016. (Social media platform musical.ly currently has more than 200 million users, the majority of whom are young and female.)

After the Bell is part of a new partnership between live.ly and Sweety High that will see the development of original, premium content. And musical.ly has put its own marketing power behind the deal, recommending the series on its main page and scheduling the show in the coveted after-school time slot. The platform also pushes notifications to all users when the show is live.

“Live is growing, musical.ly is growing and we are growing,” says Sweety High CEO Frank Simonetti. “Social media is pretty immediate, but live is the next level to that, so from a CEO standpoint, I plan on continuing to put resources in this direction for the foreseeable future.”

Sweety High has previously partnered with companies like Radio Disney to co-produce shows including Sweet Beat TV, which reached more than 20 million consumers monthly on the Radio Disney website. Its newest venture, After the Bell, is an hour-long live show that airs on live.ly at 3 p.m. PST. Its young hosts talk to social media influencers, intro live performances and discuss pop culture, makeup, sports and more.

“We have a very good idea from our data, and the fact that we reach millions of girls every month, what this cohort loves. After the Bell is an amalgamation of those things in a Snapchat-like glimpse of what’s trending during any given week or month,” says Simonetti.

But it’s not just the content that works for the demo, it’s the platform and the fact that things are broadcast in real-time, taking the well-trodden format of live TV and making it accessible on kids’ phones.

While live.ly and content like After the Bell are free to all users, Sweety High is developing the revenue model for the format. For instance, there are emoji reactions that viewers can buy and then give to their favorite show. The in-app purchases range from US$0.99 for 100 coins to US$99.99 for 10,000 coins, all of which can be used to redeem emojis and used to react to the show as it’s live streaming. In live.ly, the most popular purchase is 100 coins, followed closely by 500 coins for US$4.99. While Sweety High remains tight-lipped on its revenue generated by the in-app purchases, Simonetti says the emojis provide an element of engagement that makes the platform especially appealing.

“As opposed to a show where they say, ‘We’re going to take a caller,’ there are thousands and often tens of thousands of kids weighing in live during the hour that the show airs,” he says. “So there’s a ton of interaction between the consumers of the show, the producers and the hosts.”

This also means the show can completely switch gears if something is not working, and change things up entirely the next day. To Simonetti, real-time reactions breathe new life into an old model used by popular live linear-TV shows like Total Request Live and American Idol.

After the Bell, which has aired more than 50 episodes over the past two months as a part of a beta launch, is now looking for brand partnerships to further monetize. Simonetti points out that even though the show is live, which can be scary for brands, it is also highly structured with a plan for segments, questions and ideas for what will happen next. In other words, it’s not like an influencer going live on Facebook and winging it.

Of course, other live platforms like Facebook Live and Periscope are attracting big numbers, with 85 million people tuning in to watch a Facebook Live video in 2016 and Periscope hitting 10 million users this year. But Simonetti still prefers live.ly and musica.ly, for now, primarily because of their content.

“Musical.ly wants to get into the premium content space as well, and we make a lot of non-scripted premium short-form content, so the possibility of making something with musical.ly is something else we’re talking about,” says Simonetti. “We may do a second live show that’s focused on more singular talent as well.”

According to Simonetti, young people crave this sort of two-way communication, and as Gen Z is expected to represent 40% of the US population by 2020, he’s more than happy to keep the conversation going.