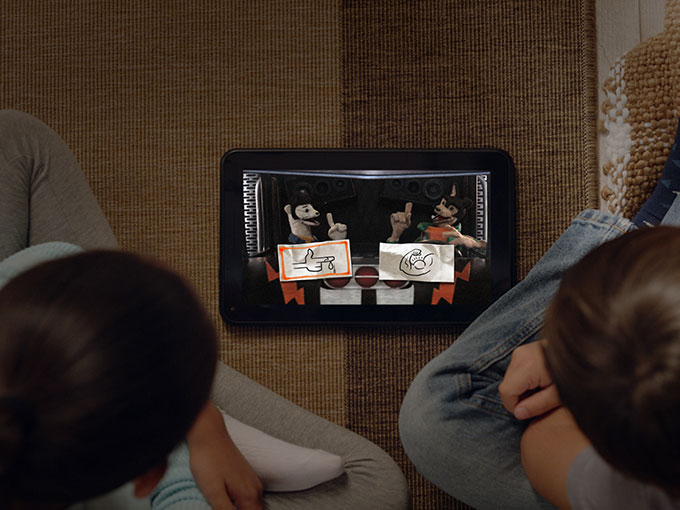 According to Ryan Wiesbrock, whose Buddy Thunderstruck is one of three new choose-your-own-adventure episodes heading to Netflix, the SVOD is blazing a new development trail in interactive storytelling.

With nearly 100 million global users and a US$6-billion content mandate, Netflix has come to a fork in the road. As the SVOD space continues to heat up—and its biggest competitor, Amazon, gains ground in Europe—Netflix is differentiating itself from the pack once again with the launch of interactive episodes that put kids in the driver’s seat.

Released globally today on iOS and select TV devices, the interactive episodes combine choose-your-own-adventure stories with original Netflix shows. The lineup is headlined by Puss in Book, “Trapped in an Epic Tale,” produced by DreamWorks Animation Television, which will be followed by American Greetings Entertainment’s Buddy Thunderstruck, “The Maybe Pile” on July 14. Stretch Armstrong, “The Breakout,” from Hasbro Studios, will join the party next year. (Apple TV, Android devices, Chromecast and Netflix’s website will not feature interactive programming.)

On the company’s blog, Netflix says the kids space was a natural place to introduce this kind of content, since children are eager to play with characters and want to tap, touch and swipe their screens. Nickelodeon, for one, recently took note of kids’ desires to have two-way conversations with their content, having just launched play-along features on its Noggin app for Bubble Guppies, Team Umizoomi and Blaze and the Monster Machines.

Netflix’s new interactive episodes will begin with introductions explaining how the whole system works. They then operate by jumping around to different plot points and allowing viewers to click through to find various outcomes. When presented with two options, there isn’t any silent downtime while a viewer decides, but rather characters will continue talking and interacting to avoid lulls. If a viewer fails to pick an option, the system will time out and pick for them.

For Buddy Thunderstruck creator Ryan Wiesbrock, the interactive episodes allow for a new mode of storytelling that just feels authentic.

“We were able to write something new that delivered on storytelling in a real way, rather than being adapted from another episode,” says Wiesbrock, who is also head of development at American Greetings Entertainment. “We wrote ‘The Maybe Pile’ specifically to play into branching narratives…so you get four different endings. The content doesn’t have to fit a rigid template.”

According to Wiesbrock, Netflix approached American Greetings because the SVOD liked what its was seeing from Buddy Thunderstruck (23 x 11 minutes), which debuted on the streamer in March. (The stop-motion series for six- to 12-year-olds is co-produced with Stoopid Buddy Stoodios.)

“When we started pitching the idea of this new interactive episode, we were just all on the same page and really connected,” says Wiesbrock. “They liked the show in a vacuum, and then appreciated the discussions we were having on the interactive side.”

“The Maybe Pile” will follow Buddy and Darnell sifting through bad ideas in order to find a suitable outcome. “The first decision is garbage pizza versus espresso cubed: Is it a good idea to have three triple espressos or a pizza with absolutely everything on it?” says Wiesbrock.  “So you pick which one you want them to do, and the characters play that out.”

There are also smaller interactive elements, like giving viewers the ability to pick between soft or hard rock music for one racing sequence. At the end of the episode, the characters forget everything they’ve done and have to go back to the beginning, making it easy for the viewer to loop back and try the other options. Overall,”The Maybe Pile” offers eight different choices for viewers and can be as short as 12 minutes—or continue through an infinite loop.

Wiesbrock doesn’t know if Buddy will be getting more interactive episodes, but he has high hopes. “We’re all excited about the initiative. But when you’re blazing a new trail, you never know how it will be received until you put it out there and see what sort of viewership you’ll get,” he says. “This is such a new thing for Netflix.”

While new to the SVOD giant, Bantam’s Choose Your Own Adventure publishing series was a proven hit with kids, selling 250 million copies in the 1980s and 1990s. The genre has yet to make it big with Generation Z, so far.