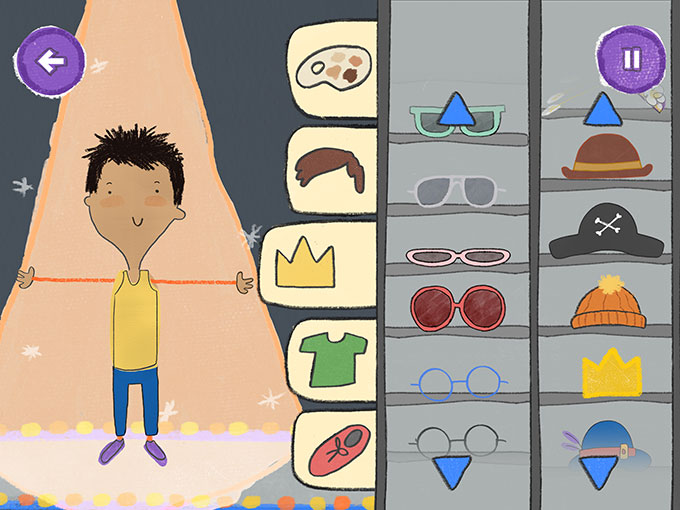 From Sesame Workshop to Ireland's Paper Owl Films, researchers and content creators are seeing just how powerful technology can be in reaching kids with autism.

Leave it to a Muppet to get things done in Washington. The small-screen arrival of Julia—Sesame Street‘s first Muppet with autism spectrum disorder (ASD)—broke new ground in April for the long-running children’s series. But her presence is moving much more than just the TV dial. Earlier this spring, in conjunction with the US Autistic Self Advocacy Network, Julia helped deliver findings from a Georgetown University study that measured the effectiveness of digital videos and eBooks in empowering ASD kids and parents. And gaining a better grasp on autism has never been more important, given that one in 68 kids in the US (and 1% of UK children) has a form of ASD—and is five times more likely to be bullied because of it.

With the rise in diagnoses and misconceptions, content creators have had the heavy task of portraying autism appropriately, while effectively reaching those with the disorder, and simultaneously educating those without it. And technology, in all respects, has been a game-changer in making it all come to fruition.

“The original strategy for Julia was to create her as a digital Muppet with online videos and eBooks, because we knew kids with autism used mobile and tablet devices a great deal,” says Sherrie Westin, EVP of global impact and philanthropy at Sesame Workshop. After Julia’s initial October 2015 digital launch evolved into four billion online impressions, Sesame Workshop brought her to life on the broadcast side. She made her US TV debut on April 10 on HBO, PBS and YouTube. 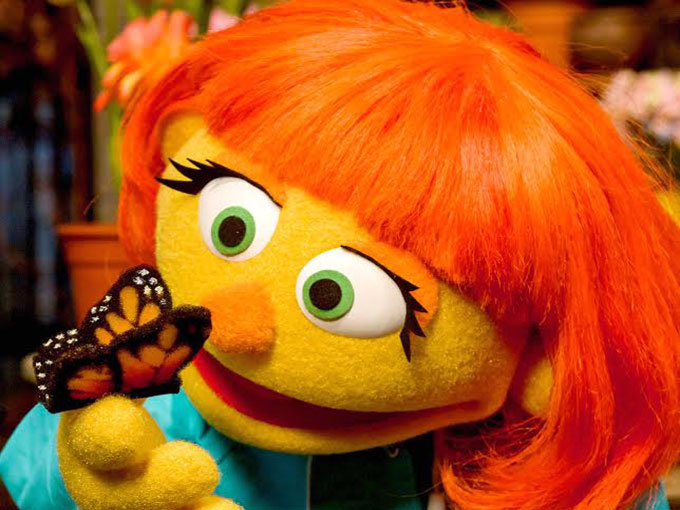 “There is a saying in the community, ‘If you’ve seen one child with autism, then you’ve seen one child with autism.’ There’s not one typical portrait, and each child is unique,” says Westin. With assistance from 14 autism associations, Julia was developed to portray kids on the mid-range of the spectrum, so she doesn’t always look people in the eye, often repeats words, may not be responsive right away, and doesn’t like loud noises.

These traits were highlighted in Sesame Workshop’s See Amazing in All Children website that features narrated videos, an electronic storybook and eight daily routine card sets. According to Georgetown University’s quantitative and qualitative study on the website, which surveyed 330 parents of kids with ASD, as well as nearly 700 parents of kids not affected by it, 70% agreed that they had a better understanding of the disorder after using these digital tools.

Dr. Bruno Anthony, deputy director at Georgetown’s Center for Child and Human Development and the study’s lead researcher, says sites like See Amazing in All Children boost awareness and understanding, which in turn translate to increased empathy and inclusion. “What hit home the most for parents of kids without autism were the videos that showed autistic kids interacting in various situations,” Anthony says. “Based on comments, parents understood things better once they saw these kids in everyday scenarios. They may be behaving differently, but it’s all very positive. We compare this to educating people about mental health and reducing stigma and attitudes toward it.”

Anthony says the prevalence of autism has increased markedly in the last decade, partly because there is a greater awareness of those on the higher functioning end of the spectrum. As such, there is a larger emphasis on identifying those kids earlier and developing interventions that can be implemented in schools. There have also been more moves among those in the medical community to diagnose ASD among adolescents, and not just very young children.

Still, digital tools aimed at reaching kids tend to skew younger. “Research is being conducted right now on iPad skill sets. And these games have to be based on good research. I worry sometimes that there are activities aimed at kids with autism that haven’t been well-researched,” Anthony says. “The best games need to be flexible enough to adapt to the varying interests of a child.” 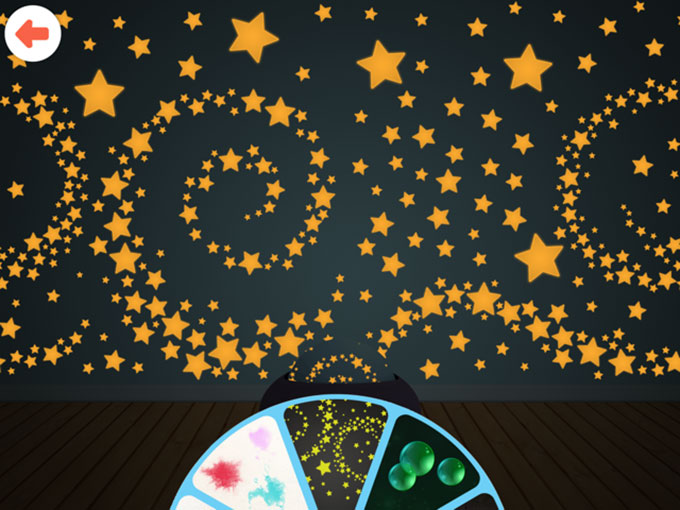 An adaptable environment is the very premise behind Hopster’s brand-new Sense playroom. The UK-based SVOD app launched the in-app hub in March as a way for kids, particularly those on the autism spectrum, to develop sensory processing skills. Along with the new features, Hopster also rolled in original content focused on accepting and tolerating differences.

Sense aims to both relax kids and let them play. It includes nine screens with various textures, sights and sounds that can be ignited by the touch of a finger. It is also designed to help develop fine-motor skills, especially when it comes to rotation and positioning, and a section of the app includes calm and meditative animations using water and bubbles.

Given its atypical nature compared to Hopster’s entertainment-based fare, the company opted for extensive user testing and consultations. “We learned that autistic kids can get really engaged. Tech offers them that one-on-one interactivity that gives control and independent exploration,” says Lelia Ingram, head of learning at Hopster. “We made sure there were no flashing lights or voiceovers, and the music is relaxing. TV can often be an assault on the senses. But handheld devices represent ownership.”

So far, the elements have added up for Sense, which was played more than 370,000 times four weeks into its March launch. Hopster has therefore decided to keep it as a permanent in-app feature, with more activities—or Sense screens, as they’re called—added regularly.

“Having spoken to many parents and teachers, they say there are a lot of apps out there designed for kids with autism and heightened sensory issues. But we wanted it to be inclusive of all kids with special needs. So that everyone, not just autistic kids, can enjoy it,” Ingram says. “It’s important for kids to diversify their experiences and educate themselves. Everyone has some form of sensory difficulty; even the sound of a hairdryer can bother people. So Sense helps to paint a greater picture.”

Apps that promote emotional recognition are also picking up momentum in the space. A recent University of Bristol study confirmed that young people with autism have difficulty recognizing and distinguishing between varying facial expressions, which led the institution to collaborate on an educational iPad app entitled About face to coincide with its findings. The game has similar characteristics to FindMe, an app developed in 2012 by University of Edinburgh professor Dr. Sue Fletcher-Watson that encourages eye contact among autistic children.

According to Maggi Laurie, a PhD researcher with Dr. Fletcher-Watson at DART (Development, Autism, Research, Technology) lab, digital games are powerful tools in unlocking social skills for ASD kids. “The medical community says those with autism aren’t adhering to social norms due to deficit and disability, but there is a grassroots model that asks, ‘Well, what if they’re just not interested in doing these things?” says Laurie, who is studying the social implications of tech on autism. “Perhaps there is no eye contact because these children don’t see rewards from social interaction. Since kids with autism are so interested in tech, it can open up more opportunities for social behaviors.”

Laurie says tech can encourage spontaneous social behaviors in autistic kids that may not be seen in non-digital activities. For example, a child may be shy with his or her peers in the classroom, but will be a highly skilled leader in an MMORPG. This is because tech may add structure to an environment, or remove overwhelming elements like noise.

“I hope that digital creators are going to pick up on these opportunities to help kids develop social skills. Like encouraging pretend play that they aren’t getting elsewhere,” Laurie says. “It’s unfair to think autistic kids will only like tech designed for them. Toca Boca games have opened up opportunities for collaboration between autistic kids and parents. They take turns doing actions that have elements of pretending. You don’t have to design something specifically for autistic kids for it to resonate with them.”

The same goes for kids not affected by ASD. For Grainne McGuinness, creative director at Ireland’s Paper Owl Films, the hope for her new CBeebies series Pablo is to reach and educate a widespread, mainstream audience.

The co-pro with Kavaleer Productions, which will launch this fall at MIPCOM, is written from the point-of-view of kids with autism. It features an autistic boy (both in live action and 2D animation) as he faces a challenge that’s magnified by the lens of his condition. All of the show’s voice actors have autism, and its animated characters express traits like flapping and sensitivity to sounds. The show’s corresponding digital games, developed with Manchester-based D3T, are based on the personality of each character.

“The most important things we saw in developing the games are that instructions have to be clear, there are no levels, and you can choose where to go at any time,” says McGuinness. “And most of all, it has to be fun. Kids with autism want to have fun, too. Tech can be a useful tool to occupy a mind while in overload. Or exercise a part of the mind that’s highly developed.”

Rain Man associations aside, there is something to be said about addressing many autistic children’s propensities for numbers. And Craig Smith’s Code For Life initiative is among those up for the task.

The Australian teacher has found great success in using tech to reach his autistic students at Aspect Hunter School in Newcastle, Australia. And last December, he launched Coding for Life as a global online Hour of Code course meant for those on the spectrum. “Coding just became part of Australia’s national curriculum. While not all of my students are going to be app developers or engineers, they will learn some of the foundations around logic, sequence and problem-solving. These are very particular concepts that can teach life skills,” says Smith. The goal of Code For Life is to encourage independence through the order of daily events, such as a child’s morning routine.

Smith says digital programs like Code For Life are a way to inspire kids through a conduit with which they’re already familiar. And big-name mainstream platforms like Minecraft are just as crucial. For example, Smith recently tapped Microsoft’s open-ended game to educate his class about Australia’s national Anzac Day.

“It’s a holiday to remember our involvement in World War One. But autistic kids may not be interested or have the same historical understanding. So we used Minecraft, which they have a common love for,” Smith says. “We took landscapes from countries that Australia fought in and had our students recreate the spaces on the platform to understand where our soldiers went. They also made images based on original historical photographers, all within Minecraft. It was our canvas to explore the subject matter.”