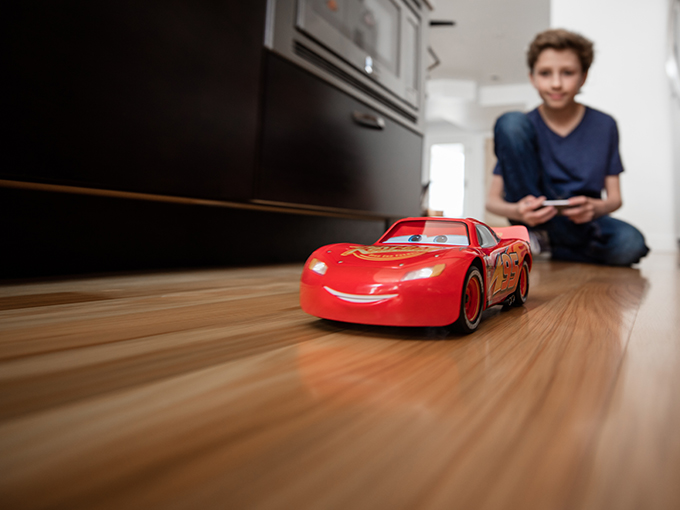 Following the breakout success of its Star Wars BB-8 Droid that launched alongside Disney’s record-smashing 2015 feature The Force Awakens, Boulder, Colorado-based Sphero has tapped the Mouse House once again—this time on a licensed product tied to the Cars movie franchise.

The latest Sphero robot—Ultimate Lightning McQueen—is a talking interactive racecar based on the lead anthropomorphic character of the same name from the upcoming Disney/Pixar feature Cars 3, which hits theaters June 16.

Ultimate Lightning McQueen’s features include animated LCD eyes, an animatronic mouth, lifelike voice and engine sounds, reactive touch capabilities, emotive suspension, buildable app-connected racing strategies and games. Kids and parents can also view Cars with Ultimate Lightning McQueen in a “Watch with Me” mode, where the bot reacts to the movie in real time. Sphero’s BB-8 offers the same functionality for The Force Awakens and, most recently, Rogue One: A Star Wars Story.

In addition, kids can use a special acting studio in the app to build custom scripts that bring existing animations to life with the car.

As for specs, Ultimate Lightning McQueen is iOS and Android compatible, has a 30-meter range, a Bluetooth connection, running head and tail lights, tire materials that allow for drifting on hard surfaces, and 40 minutes of battery life on a one-hour charge.

The product is available starting today on Sphero.com, Disney Store.com and exclusively at Best Buy Canada for CA$375.

According to Sphero product manager Jenica Watts, the company had a lot of opportunities after BB-8, and one of them was to work with Pixar “It’s a brand we really admire, so with Lightning McQueen, we’ve furthered our relationship with Disney,” Watts says.

Sphero originally began its dealings with Disney in 2014 after being selected for its Accelerator mentorship program, which led to the development of the BB-8 Droid in collaboration with Lucasfilm.

Looking at the development process of Ultimate Lightning McQueen, Watts says a number of Sphero engineers were taken to the Disney California Adventure Park for inspiration.

“They took us behind-the-scenes at the Radiator Springs Racers Ride in Cars Land to show how they create their life-size animatronic cars. So we looked at some of the different technologies and some of the ways we might approach bringing our own Lightning to life,” she says. The key, she adds, was to make a Lightning that could both perceive the world around it as well as emote.

“To do this, we developed things like capacitive touch panels in the roof, the hood, near the rear window and both of the sides. His tilting and leaning is run by five motors, two in each of the wheels and a fifth for steering. And it has a sixth motor in the mouth,” she says. “The suspension is also designed by a mechanical engineer on our team who came from building motorcycles and three-wheeler suspensions. So this is a real car and has all the durability you’d expect from a Sphero product.”

With so much under the hood, integrating everything was the hardest part of the project, according to Watts.

“It has a ton of systems—three processors, 450 parts, six motors, capacitive touch panels, an app and we’re running firmware on each of the processors. But as company, Sphero prides itself in taking things that are really complex and making them feel really simple.”

As for the pressure of following up the phenomenal success of its BB-8 Droid, senior director of marketing and communications Claire Tindall says developing Lightning McQueen was more of a heightened learning experience.

“I wouldn’t say it was pressure, but it opened our eyes to how we can really bring characters to life off screen,” Tindall says. “It taught us the importance of remaining authentic to the character, to the movements and sounds and bringing it to life was so key. It wouldn’t be Lightning McQueen if his mouth didn’t move like it does or it didn’t sound the way he does.”

Ultimate Lightning McQueen can be seen in action here.