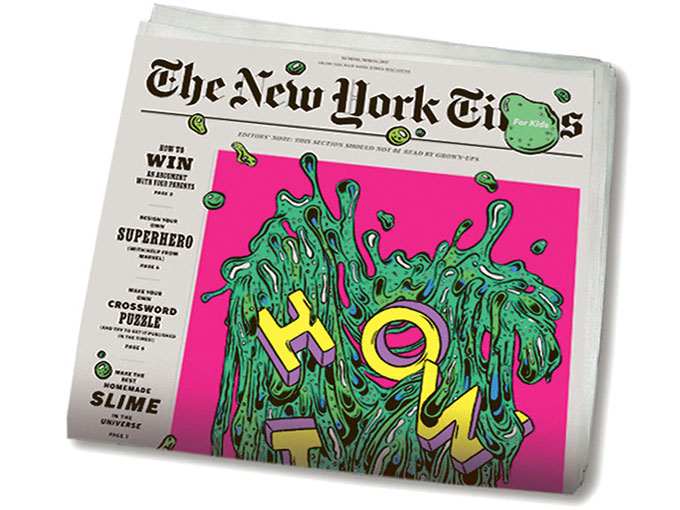 Kids can handle the truth

On May 13, The New York Times ran a special kid-focused news section that included a full page of “truths” about children. What a shame that the editors didn’t believe in their own statement. They would have given kids the news insights they deserved, rather than a condescending Fun Pages.

My disappointment with the section wasn’t something new. I’ve long been frustrated by adult underestimation of young people’s interests and abilities.

There was no actual news in the section, nor any age-appropriate analysis of serious events in the world. Young people certainly worry about these things, having seen and heard about them in adult print, television and digital spaces.

To be sure, the features were fun and interesting, especially a series of pieces on professions dubbed “How I Became a…” It was, however, disrespectful and showed a lack of trust in young people to give them chocolate pizza recipes and not cover an administration trying to return junk food to schools; or to suggest that they illustrate newspaper photos, but also show them kids their age living in refugee camps.

The Times might have taken its cue from kids themselves. On a page of one-sentence “opinions,” children spoke about gun control, stopping deportation, bullying, drugs and pollution. Further, the paper missed an important opportunity by tapping the outdated trope of dividing kids and parents, beginning at the top of Page 1 with an “Editors’ Note: The Section Should Not Be Read By Grown-ups.” Most current research finds that children and parents crave more time together and more dialog. Many parents struggle to explain today’s tempestuous world. Given a chance to promote co-engagement and family dialog, the newspaper instead went for the tired “kids only” model. (I was shocked, also, that an article on winning arguments with parents recommended playing them off against one another.)

When I get my Sunday Times, I read the news, opinion, sports, style, arts and travel sections. I expect a great newspaper to cover the breadth of topics, from challenging, to inspirational and frivolous. Why should children settle for less, especially from the paper that touts “all the news that’s fit to print?”

For almost 30 years, I’ve traveled the world seeking best practices in children’s media, and have brought many examples back to the US. My constant frustration has been our lack of news and non-fiction media for children.

On the UK’s BBC, Newsround has been a daily fixture since 1972. German children have watched Logo! daily since 1988. WaDaDa News for Kids is built from segments produced in more than 20 countries from Bangadesh to Zambia, but guess which country is missing? The US.

Serious and factual doesn’t have to mean boring. In Argentina, animated series Zamba has explained difficult moments from that country’s history, like the Madres of the Plaza de Mayo, at a developmentally-appropriate level. Throughout Europe and Scandinavia, there have been recent documentaries about refugees and immigrants in order to introduce young people to their recently-arrived neighbors, or sometimes to acclimate immigrants to their new culture.

Research helps, but it’s important to understand that it doesn’t mean just giving kids what they say they want. Children know when they’ve experienced. Our role as adults is to listen, then extend their reach and grasp using expert insight into how young people talk and listen, think and envision, worry and are soothed.

I hope that the Times’ first kids news section isn’t its last. But I also hope that for the next edition, the paper will engage its world-class reporters and columnists, many of whom likely have children of their own who ask tough questions. They can help these journalists collaborate with experienced children’s writers and experts in facilitating family engagement.

With commitment and collaboration, we all can create balanced and nutritious feasts—not just chocolate pizza.