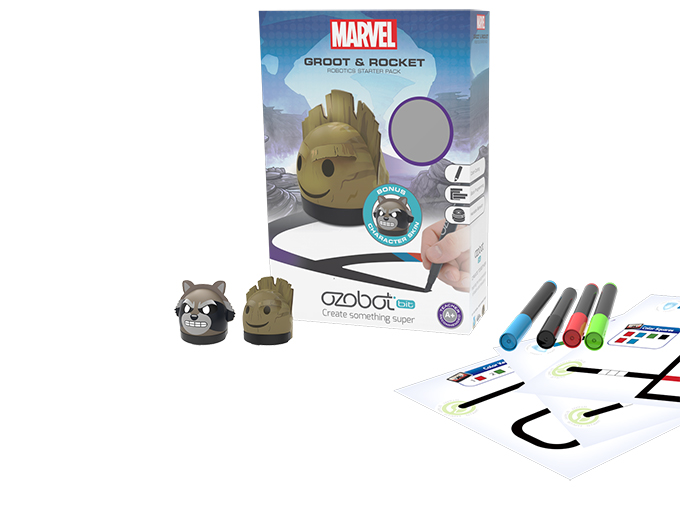 The robotics company's new Marvel line for its STEAM-centric Ozobot Bit will feature starter packs based on Guardians of the Galaxy and Spider-Man.

The company will launch Ozobot Bit starter packs based on Marvel properties Guardians of the Galaxy and Spider-Man at Disney’s D23 Expo July 14 in Anaheim, California.

Providing a physical and digital STEAM experience, the Ozobot Bit comes to life by drawing lines and color segments on paper. The patented color command language, or OzoCodes, can make the Bit robot spin, dance or zigzag.

The Guardians of the Galaxy pack includes skins of popular characters Groot and Rocket (pictured), while the Spider-Man pack will feature Spidey and Venom. Each pack will retail for US$59.95. A free, web-based block-based programming editor, OzoBlockly, for more advanced coding is also included in the box.

Additional pack items include 20-plus pages of drawing and color coding activities, four color-coding markers, DIY, Marvel-themed stickers and pop-outs, as well as free Android and iOS apps and online and printable games.

The new line will supplement Evollve’s existing Marvel Avengers line for its Bluetooth-enabled social Ozobot Evo. Captain America and Iron Man skins are currently available and will be joined by Black Widow, Hulk and Ultron in the coming months.

Ozobot currently reaches one million kids in homes and schools with more than half a million units shipped and bots placed in more than 3,000 classrooms.