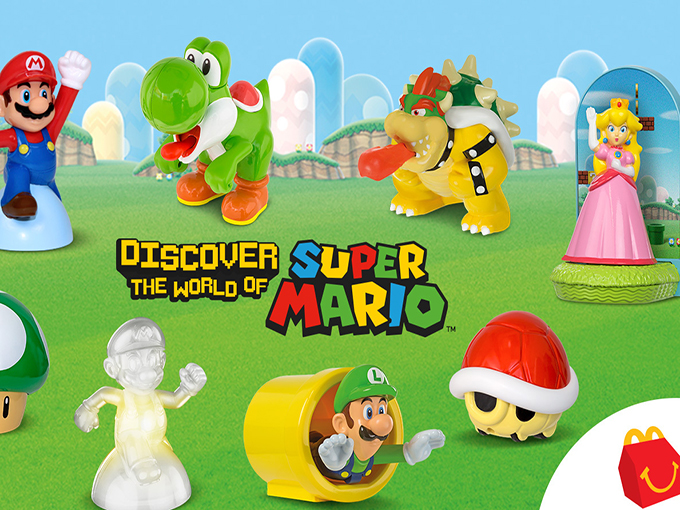 As Nintendo's Switch continues to bite into the console market, the gaming giant has launched a US McDonald's promotion tied to its latest video game.

In the lead-up to the April 28 launch of Mario Kart 8 Deluxe, gaming giant Nintendo has aligned with McDonald’s to provide toys based on the iconic video game property in Happy Meals across the US.

Beginning today and running until May 22, Happy Meals at participating McDonald’s will include one of eight toys based on Super Mario characters. Each collectible will have a special function, like a translucent Mario that lights up in different colors (pictured).

All of the characters—Mario, Luigi, Princess Peach, Bowser, Yoshi, Invincible Mario, Red Koopa Shell and 1-Up Mushroom—will be featured in Mario Kart 8 Deluxe for Nintendo’s newest gaming system, Switch. As a bonus opportunity, US residents who are 13 and older will be able to enter a sweepstakes for a chance to win one of 100 Nintendo Switch prize packs, which include a Nintendo home and portable Switch system and Mario Kart 8 Deluxe.

To enter, eligible customers will have to scan and purchase a meal at McDonald’s using the restaurant’s mobile app from today through May 22.

The promotion follows the March 3 launch of Switch, which turned out to be Nintendo’s biggest hardware launch in its history across Europe, the US and Australia. The NPD Group recently estimated that Nintendo sold 906,000 Switch consoles in the US alone during the month. For perspective, first-week US sales of the iconic Wii topped 600,000 units sold, while the disappointing, and now discontinued, Wii U only moved 400,000 units after eight days.

Research firm SuperData estimates that Nintendo has moved 2.4 million Switch systems globally to date. Nintendo will reveal exactly how many Switch consoles have been sold worldwide when it releases its full fiscal year earnings report tomorrow.