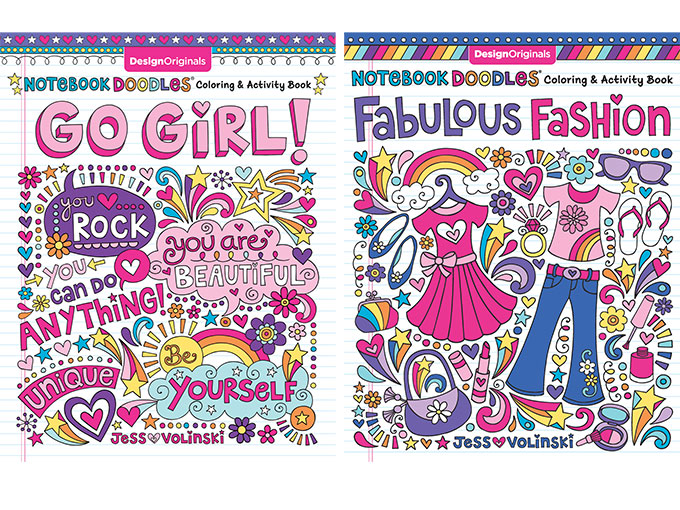 Fox Chapel goes outside the lines with tween coloring books

The US publisher is focusing on tweens to stand out in the saturated coloring book category and is looking for licenses.

According to data from Nielsen BookScan, 50% more coloring books were sold in 2016 than in 2015. The number of coloring book publishers, like Fox Chapel, increased by 175% last year, while the number of adult coloring books issued rose by 108%, with 3,500 new titles in 2016 alone.

This crowded marketplace has forced Fox Chapel editorial director Peg Couch to get a little more creative with the launch of the Notebook Doodles line by author and artist Jess Volinski for older kids and tweens. The line launched in fall 2015 with a number of retailers including Michael’s, Amazon, Barnes & Noble and Learning Express. The coloring books retail for US$7.99 each.

“We were in really early with the trend in 2015,” Couch says. “We had heard of these books coming out of Europe, especially France. Things just really grew within the span of two years. We did more than 100 adult coloring books in that time. But we really had to look at how to maintain our core while also really diversifying.”

Couch says there are plenty of coloring books for young kids at a low price, but inventory aimed at older kids and tweens is essentially non-existent. The Notebook Doodles line focuses on positive messages with art featuring music, fashion and friendship.

“I think we really filled a gap there, because there’s this audience that was either too old or too young for what was available,” she adds.

Couch says the focus on this demographic has also led to increased social media engagement, as older kids and preteens are more likely to share their creations online than their younger counterparts.

“We see that kids start coloring by themselves, but very quickly they want to share it with their friends through coloring parties or by sharing their work on social media,” she says. Fans of the books have shared their coloring through Facebook, Instagram and Twitter.

The Notebook Doodles line does not currently have any licensing partners, though Couch says licensing is a great way to differentiate within the market and that licensors like Disney and Warner Bros. have seen significant success with coloring books.

“With so many coloring books coming into the market, the branded books really help the consumer separate us from all of the other products,” she says. “It becomes a go-to in a busy market.”