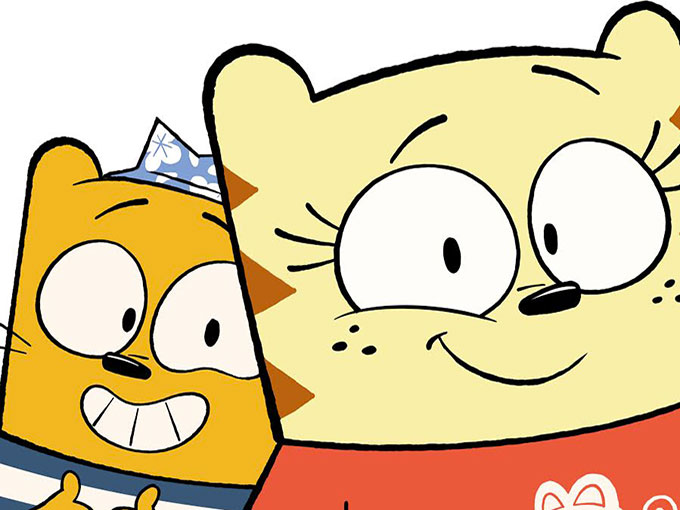 The book series about two cats traveling the world is making the trip to the small screen in new preschool series The Ollie & Moon Show.

There is some tension surrounding the topic of travel these days, but that won’t stop two cats from globetrotting. New animated series The Ollie & Moon Show features two cats crisscrossing continents in search of adventure.

The Ollie & Moon Show is based on a book series by author and illustrator Diane Kredensor and published by Random House. The series is aimed at kids three to six and features both 2D animation (feline best friends Ollie and Moon) and live-action backgrounds. It’s set to premiere this spring in the US on 24/7 preschool net Sprout.

The trip from page to screen was also significant, according to Michel. “The book series is about serendipity,” he says. “It’s about traveling cats that don’t really know where they’re going, so the book series is essentially about the wonderful surprises you run into when you’re not looking for something.”

This feeling of serendipity and endless possibilities needed to work within a traditional television format, however, which often relies on a goal-driven story-of-the-week model.

Just like its furry protagonists, the show is getting global exposure. Federation Kids & Family has signed a raft of broadcast agreements for the 52 x 11-minute animated series with partners in more than 150 territories, including the US (NBC Sprout), Canada (Knowledge and TVO Canada), France (France Télévisions), the Middle East (Discovery Kids), Latin America (Discovery Kids) and Belgium (VRT).

Additionally, Michel says discussions are underway regarding a second season that would hit airwaves in 2018. And as the series continues to make its mark all over the map, there are also plans to launch consumer products.

The range will stay true to the show’s graphic mix of animation and live action, says Michel, as well as the sense of friendship and fun represented by Ollie and Moon. “When you’re an indie, the process around consumer products is a little longer, a little harder,” he adds. “What we’re doing is working in stages. We are starting with key categories like publishing and back-to-school because those are the easiest categories to activate.”

According to Michel, Cottonwood is currently looking for licensees to begin work on back-to-school, apparel and additional publishing based on the series. Products inspired by The Ollie & Moon Show will launch first in the US and key European markets, he says. And as awareness for the show grows, so too will the consumer products program.

Ideally the program will grow to include a number of categories like toys, collectibles and plush that will launch at retail alongside the second season’s debut.