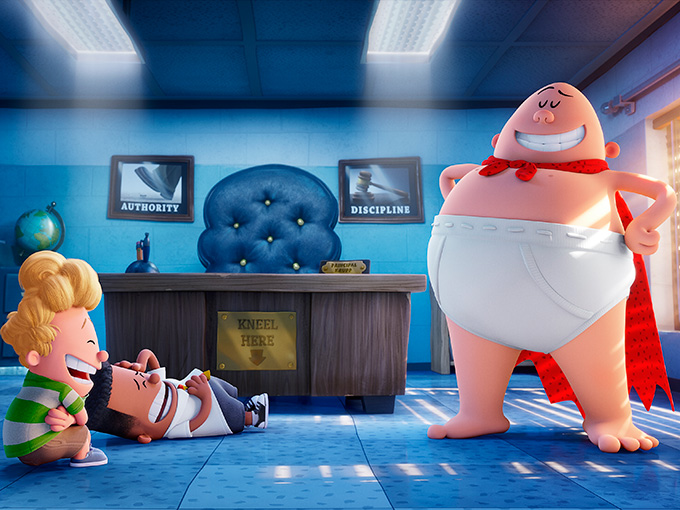 With 70 million books sold, DreamWorks is readying Captain Underpants for a big-screen change - and director David Soren tells Kidscreen what it took to make that happen.

After seeing fans devour his quirky Captain Underpants novels for more than 20 years, author Dav Pilkey finally realized it was time for a change.

Following DreamWorks Animation’s acquisition of the books’ rights in 2011, Pilkey’s vision fell into the creative hands of director David Soren, whose The Captain Underpants: The First Epic Movie will make its highly anticipated premiere on June 2.

Soren, who was also behind the lens for DreamWorks’ 2013 feature film Turbo, spent two years bringing the books to life. And given that the series spans a dozen titles and three spin-offs—leading to 70 million books sold to date—the duo has had no shortage of material to play with.

The books follow George and Harold, two fourth-grade best friends who are also pranksters. They hypnotize their principal, Benjamin Krupp, and turn him into Captain Underpants, a superhero from the comic books they wrote together. Once the movie’s trailer  was released a few weeks ago, things became real for Soren, who tells Kidscreen about the creative demands of adapting a classic.

How do you feel about bringing this book series to film?

It’s just the greatest privilege that you could ask for, I’ve loved the books for years. I stumbled across the first novel that Dav Pilkey created, almost 20 years ago now, at a book store and read about half of it in the aisle. I thought, ‘Oh my gosh, I wish I came up with this myself.’ Then when I had kids we rediscovered them together, read all of them and then my kids read through them themselves. I’ve loved them from day one, so it is a great honor.

What makes the characters of this story relatable to today’s kids?

I think it’s the classic wish fulfillment, let-the-genie-out-of-the-bottle kind of story where these two kids get to hypnotize their principal and do anything they want with him. I think the idea of standing up to authority, especially when the authority in question is Mr. Krupp, is a great way to have kids realize that they have power and should use it for good. George and Harold in particular are these two really creative kids who have a great time in their treehouse hanging out and making these comics together. I think that is what really got me excited about the project. It rang true for my closest relationships growing up, which were typically ones where I could share creative endeavors with my friends and those friendships ended up lasting a really long time. That’s not a quality you often see in movie friendships.

How do you decide how loyal to be to the text?

When I first came onto the movie, shortly after I met with Pilkey, I showed him what we were up to, some of the artwork and some of the story ideas that we were cooking up. He was really fantastic in that he very quickly understood that we were capturing the spirit of what he had created. He really gave us carte blanche to do what we needed to do. He also was very clear that he is not a big fan of adaptations that are word-for-word accurate. He said in his opinion there wasn’t much to be gained from going to the movie in that scenario. He really liked that we were being true to the spirit of what he was doing honoring the characters but also bringing new ideas to the table.

What are some of the challenges you faced?

Some of the later books connect, but the earlier ones don’t. It didn’t feel like there was quite enough meat on the bones for any one of the early ones to translate into an entire movie, so we mined elements from the first four books and then created a story around those aspects. It’s something that works on its own without people needing to be super familiar with the books.

There were loads of other challenges but all good ones for the most part. One of the fun things about the books is that Pilkey does all of these unconventional story techniques like breaking the fourth wall, doing comic strips within the books, doing a lot of word play and flip-o-ramas. A lot of things that make it really fun to read. Some of those things inherently translate better than others to a movie. So my goal was to load the movie up with as many unconventional things as well but do them in cinematic ways.

How is it going to look on screen?

That was another challenge – trying to figure out what the animation style of the movie should be. We were sure tonally that it needed to be cartoony and looked at tons of old Warner Brother cartoons, Chuck Jones cartoons, even older to UPA and found a style that I think we haven’t done before at DreamWorks and that most feature studios haven’t attempted. Our head of animation and our character designer did some early line tests – hand-drawn tests – that helped define what the animation style would be. It’s got kind of an original quality to it that I think people are going to find refreshing and certainly applicable to the series.

Is there already talk about sequels?

Well, it’s called Captain Underpants: The First Epic Movie, so the studio certainly has aspirations for more. We’re all hoping that it’s successful and that we get more and more. We all had just the best time making this thing so it would be great fun to do another one.

With Underpants merch rolling out, what are you most excited to see?

I don’t know a huge amount about that. I know there has not been very much merchandise on the book series. That comes down to what Universal wants to do. Certainly the designs themselves would translate beautifully into toys. Everybody on the crew is hoping there’s going to be a lot of merch for this.