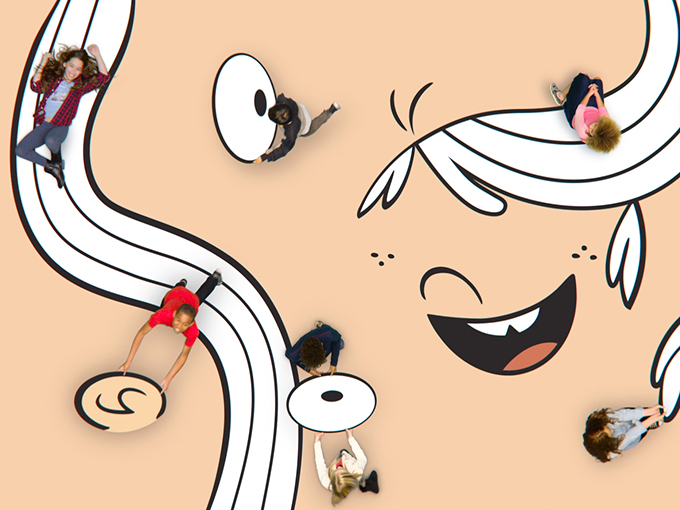 Nickelodeon has launched a brand refresh inspired by the viral look of GIFs and emoticons, while also kicking off a new initiative focused on gender equity.

On the heels of its 2017 upfront and best Q1 ratings in five years, Nickelodeon has launched a new on-air and online brand refresh, created in partnership with Argentinian creative agency Superestudio.

Revealed at the 2017 Kids’ Choice Awards over the weekend, the new look and feel blends live action with 2D and 3D animation, and focuses on the playfulness and imagination in kids’ lives.

The new content depicts children interacting with the real world and reimagined versions of Nick’s iconic characters and properties, including SpongeBob and The Loud House (pictured). Inspiration was also taken from the surreal nature of GIFs, memes and emoticons.

The refresh features nearly 300 deliverables—including bumpers, IDs, promo toolkits and graphic developments—that are rolling out first on the Nick’s US linear platform before heading online, across social media and off-channel. New iterations of the content will then head to the network’s international channels.

Notably, Nickelodeon’s classic orange logo will now be set against a backdrop of colorful new tones like purple, light blue, lime and cream.

In other partnership news, Nick has joined forces with child rights organization Plan International on Together We Rock, a new pro-social campaign dedicated to encouraging gender equity. The initiative is tied to the kidsnet’s hit sitcom School of Rock.

Running until the end of May, the campaign is part of Nickelodeon’s international Together For Good plan and features an international digital game hosted by School of Rock lead Tomika, as well as a global programming marathon highlighting the show’s empowerment-themed episodes.

In Together We Rock the game, users play as student musicians on a path to rock stardom and use coding concepts to progress to higher levels. Ideas for the free game and how it would explore the subject of gender equity were developed last fall by Nickelodeon and members of the Plan International youth delegation in commemoration of International Day of the Girl.

For the School of Rock marathon, episodes featuring female role models and themes of equity and self-confidence will air across more than 170 countries and territories internationally.

The initiative comes as awareness around gender-equity issues is growing worldwide. Earlier this month, Australian pubcaster ABC and Screen Australia announced a funding program for female creators of tween content for girls that supports gender equity and diversity across the Australian film and television industry.

gender equity, Nickelodeon, Plan International, School of Rock, SpongeBob, Superestudio, The Loud House, Together For Good, Together We Rock