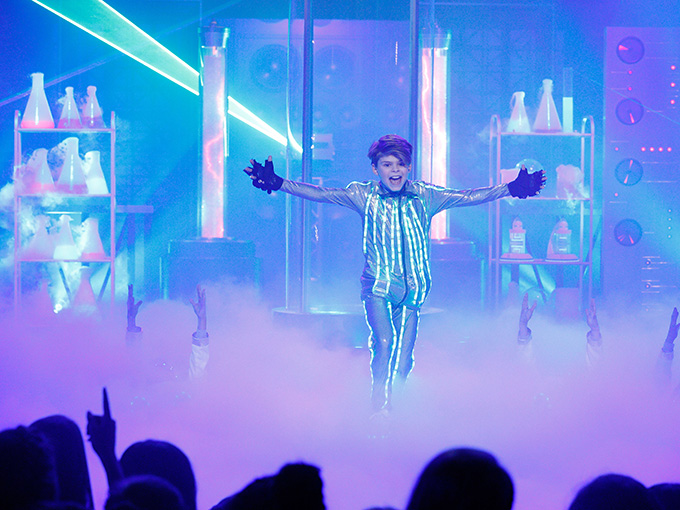 Projects from hitmaker Dan Schneider and teen influencer JoJo Siwa were among a raft of new series unveiled at the kidcaster's annual upfront presentation.

Following its best Q1 performance in the kids six to 11 demo in five years, Nickelodeon swung into New York today for its 2017/18 upfront presentation riding a wave of momentum and touting a content pipeline stacked with nearly 700 episodes of new and returning series.

For preschoolers, the network will premiere three new animated series Butterbean’s Café, Sunny Day and Top Wing, along with close to 200 new episodes of returning hit shows including PAW Patrol, Blaze and the Monster Machines, Shimmer and Shine, Mutt & Stuff and the newly launched Nella the Princess Knight.

Originally announced last May, Butterbean’s Café comes from the minds of Bubble Guppies creators Jonny Belt and Robert Scull, and Irish producer Brown Bag Films. The series follows the cooking adventures of a fairy named Butterbean who runs a neighborhood café with her friends.

Also announced last May is Top Wing from Canadian producer 9 Story Media Group. Created by fellow Canuck studio Industrial Brothers, the CG-animated action-adventure series tells the story of a flock of young birds that becomes a team of rescue birds to help their island community.

Sunny Day, meanwhile, follows the life of a 10-year-old problem-solving hair stylist and is produced by Silvergate Media (Peter Rabbit). Forty episodes have been ordered by Nick for both Sunny Day and Butterbean’s Café, while Top Wing has a 26-ep order.

Nick currently owns six of the top-10 programs for kids ages two to five this year, according to Nielsen Media Research, led by top-ranked PAW Patrol.

For kid-targeted animation, three new series will be introduced, Amusement Park, The Adventures of Kid Danger and Captain Man and Rise of the Teenage Mutant Ninja Turtles, while nearly 200 episodes of returning hits including SpongeBob SquarePants, The Loud House and ALVINNN!!! and The Chipmunks are scheduled to launch.

Amusement Park is a result of parentco Viacom’s new five-point turnaround plan, which will see Paramount’s film slate include co-branded releases from each of Viacom’s flagship brands.

It is the first of a four-film Nick/Paramount theatrical slate and will be directed by Dylan Brown for a July 2018 premiere. A Nick TV series adaptation will follow in 2019.

Ten episodes of The Adventures of Kid Danger and Captain Man (working title) are also in the mix. Created and executive produced by Dan Schneider (Game Shakers, iCarly), the crime-fighting program is based on Schneider’s top-rated live-action comedy Henry Danger.

The third new series is Rise of the Teenage Mutant Ninja Turtles (working title, 26 episodes), a 2D-animated reimagining of the global TMNT franchise. Slated for this fall, the series follows the famous half-shell heroes as they discover a magical new world beneath the streets of New York City.

In other animated moves, Nick has ordered a 26-episode second season of Kuu Kuu Harajuku, a series co-created and executive produced by music icon Gwen Stefani. The first season bowed on Nick US in October.

New 20-episode shows Bunsen is a Beast, Pinky Malinky and the TV version of digital short-form series Welcome to the Wayne are also included among Nick’s 2017 animated lineup.

The kids version is created and executive produced by Casey Patterson Entertainment and Matador Content, with John Krasinski, Stephen Merchant and Eight Million Plus Productions also serving as executive producers. It will begin production later this year and is set to premiere in the fall.

I Am Frankie, meanwhile, is a 20-ep series about a teenager who is forced to hide her true identity as an experimental android or risk being switched off forever.

Rounding out new live-action programming, an untitled docu-style special that gives viewers an exclusive look into the life of 13-year-old singer, dancer, performer and social media influencer JoJo Siwa has been greenlit.

The network is already in the process of signing merchandising and promotional partners in categories including apparel, home furnishings, toys, accessories and publishing.