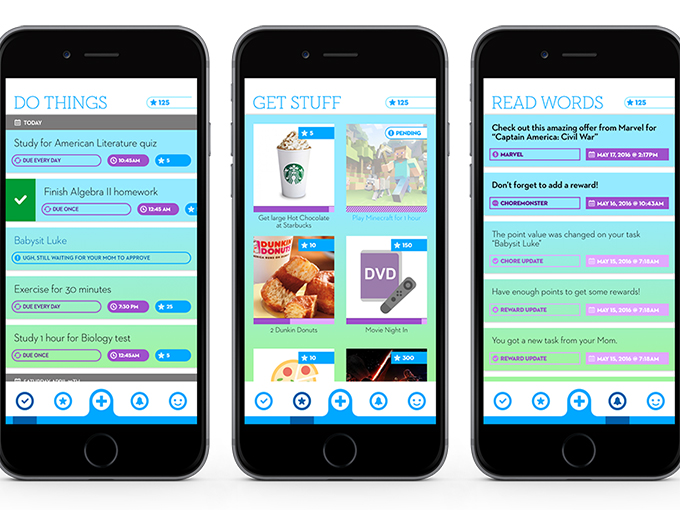 How FamilyTech’s apps are sweeping the chores trend

The developer's marketing manager on how its apps are bringing families closer together. Except, perhaps, in Tampa—the city with the most missed chores.

When Cincinnati, Ohio-based startup ChoreMonster released its namesake app in 2011, the goal and vision of CEO Chris Bergman was to connect and inspire families through technology.

The tool was ChoreMonster, a free app that makes home-based chores fun for kids ages four to 12 and chore management more enjoyable for parents.

ChoreMonster features a customizable point system for real rewards like ice cream, a family camping trip, or an hour of Xbox. It also has  free, in-app digital rewards including more than 100 collectible animated monsters and original monster-themed short videos.

Disney soon took notice, and the chore-incentivized app was selected into the company’s inaugural Accelerator program in 2015, which provides mentorship and investment to aspiring tech startups.

As a result, and in response to user demand for more varied content, ChoreMonster rebranded to FamilyTech and expanded its offering into a suite of apps that culminated with the App Store releases of both Landra (pictured) and Mothershp in 2016.

As the ChoreMonster for teens, the former gives its users more independence as they grow up by giving them the ability to set their own chores with parental guidance.

Teens can also communicate through the app directly to their parents in Mothershp, which serves as a management hub for parents to incentivize and reward kids in both ChoreMonster and Landra.

With a global user base now in the millions, the trio of apps continues to grow. And the app that started it all recently surpassed 50 million chores completed.

FamilyTech marketing manager Erin Macdonald spoke with Kidscreen about the company’s apps, its brand partnerships and plans for the future.

Were apps for teens and parents always part of the brand equation?
It grew over time. We heard from our families that they wanted more from us. ChoreMonster changed the way their households operate and they wanted to have something similar for different problems. By spinning off the core technology that powered ChoreMonster, we were able to build a platform that powers behavior modification through relational accountability, which is a fancy way of saying that it creates good habits by connecting family members. We came to this strategy during our time at Disney Accelerator and began the process of production from there.

How have Landra and Mothershp performed so far?
Change can be hard for users, especially when it’s dramatic and impacts daily routines substantially, so we worried about how the new apps were going to perform. The good news is that they’ve exceeded our expectations and continue to grow. Building a teen audience can be challenging, but because so many families already had their younger kids on ChoreMonster, and the parent on Mothershp, it’s an easy addition to give the teenagers in the family some independence.

What’s the best day to do chores?
While we have found that most parents want their kids to complete their chores on Sunday, this ends up not being the case. The data from the app shows differently, as our top day for completed chores is what we call Manic Monday.

What are the top days for reward payouts?
The weekends see a lot of activity for rewards. Kids save up their points from the week and redeem higher-priced rewards like Movie Night Out, as well as Family Outings to Museums and Theme Parks. The biggest reward we have seen in the app is a new car that one lucky teenager is very close to getting. We are all rooting for him!

Some parents have asked for the ability to subtract points for bad behavior. Is this a consideration?
No. ChoreMonster is effective because it is 100% about positive reinforcement. It’s important that the kids can trust us. They have to know that we’re on their side, rooting for them. If it became a tool for punishment, we’d lose that trust.

Who are your current exclusive brand partners for the most popular chores?
Oral B and Crest are two of our very first partners, obviously connecting with brushing teeth, a top chore. Bounty loves making sure the kitchen is clean. Feeding the pets is actually a top-five chore, and Milkbone makes sure both parents and the pets get rewarded. With our Pixar Inside Out partnership, we went a very unique route by focusing on behavior a bit more. We suggested that parents add behaviors like “calm down when you’re mad” and “comfort someone who is sad.” These chores instantly shot to the top of the list.

What’s the biggest challenge in scaling up the company?
A big challenge for us is finding marketers willing to work with startups to make a big impact in the family. It’s very easy to buy a programmatic cost per thousand (CPM) ad, set it and forget it. But to actually connect with a family, to bring value into their home through advertising, takes innovative thinking. Thankfully, as we’ve grown, we’ve been able to find amazing marketing people who understand the value and impact, as well as the ROI.

How important are ChoreMonster‘s short animated videos and collectable virtual monsters to the brand?
Our monsters are the foundation of what makes ChoreMonster so successful in making chores fun. We want to continue to add to the millions of monsters already collected.

Any plans to extend the videos and monster characters across other platforms or into licensing and merchandising?
That’s something we’re always exploring, but we don’t have anything to announce at the moment.

Who do you consider your closest competitors?
We’ve seen a lot of digital chore charts come and go, and feel like we’re best in class when it comes to getting kids to do chores. Regarding family as a whole, Life360 and Cozi are doing interesting things, and have been innovators since the beginning. I really respect what they’ve created.

Who are your top investors?
CincyTech, Detroit Venture Partners (the firm of Cleveland Cavaliers owner Dan Gilbert), Techstars, and of course, Disney.

How else are you financing the apps?
Our Family Advertising Platform, which focuses on bringing valuable suggestions of chores and rewards, is the focus of our business model. Rewards especially. Family Movie Night has become a top reward solely due to brands like Disney, Pixar, Fox and Sony letting families know about their newest kids movies.

What’s the greatest opportunity for FamilyTech?
Our mission is to turn every home into a joyful place. We believe in fun, and we want to continue to solve problems for families and bring them closer together.

What’s next?
We have an app called HoneyDo launching later this month. I’m sure you can imagine what its focus will be.