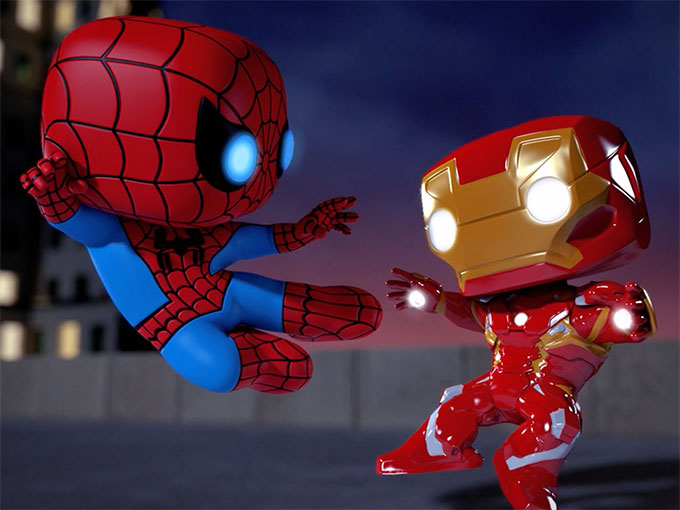 Marvel, Funko and A Large Evil Corporation on making three webisodes featuring Pop! vinyl figures—and why they're a ticket to big online views.

After breaking out as one of this year’s biggest trends in collectible toys, Funko’s Pop! vinyl figurines are treading into new territory with the help of Marvel and animation studio A Large Evil Corporation.

The companies are releasing three 90-second animated webisodes, a format that Marvel has yet to venture into using the Pop! figurines art style.

Short form is something that Cort Lane, Marvel SVP of animation and family entertainment, says is a high priority for the Disney-owned entertainment company.

“We typically tell animated stories at Marvel as 22-minute episodes in a series that spans 26, 52 or even 104 episodes, and that’s a lot of story,” says Lane. “But we’re experimenting more with short-form content because we know we can reach a very large audience. Plus, it works great on digital platforms and social media. We need to be where the audience is and offer them different kinds of stories in different formats.”

With 118,000 YouTube views and counting, reception to the first Funko webisode, Spellbound, has been incredibly enthusiastic, contends Lane.

“It was an experiment, so there are a lot of interesting things here,” he says. “There’s no dialog, because the Funko Pop! characters don’t have mouths…we’d never done anything in this aesthetic and we very rarely, being Marvel, create animation with so much humor.”

That’s also where A Large Evil Corporation (ALEC) came into play. Alex Bland, director at ALEC, says the company had several ideas, and Marvel approved the top three with which they’ve moved forward.

While the first webisode features Spider-Man, Iron Man and Loki fighting, and the third includes Deadpool and Venom, the second is Bland’s favorite.

“Bait N Switch is really cute,” says Bland. “We’ve got Rocket and he’s coming to rescue Groot from the Collector, and I think it’s a bit more atmospheric than the other two. It’s got a ‘Looney Tunes meets Hitchcock vibe.’”

For Funko, the success of Lego Marvel Maximum Overload, which have garnered 13 million YouTube views across five episodes, offered inspiration on how to effectively move from retail to short-form content.

“I admire what Lego does and I would love to have content on par with them, but clearly that’s aspirational at this point,” says Mark Robben, Funko’s director of marketing. “We’re focused on getting these webisodes out with Marvel, and then I’d like to see more.”

“One of the reasons we were so open to this is because the reception to our Lego shorts has also been through the roof in terms of viewership, so we knew something that was more humorous and stylized could really reach a young audience,” says Lane.

But there are several differences between the two types of webisodes.

“The Lego shorts are much more story-driven. Plot lines are more complex, and with Lego content there just tends to be a lot of characters and a lot of snappy dialog,” says Lane. “The Funko ones are driven by physical humor and visuals, which is a different experience.”

Even while trying to differentiate itself from other collectible toys, Funko has gone mainstream. The company’s Pop! figurines have moved beyond specialty stores to mass-market retailers like Walmart and Toys “R” Us. And the company will be releasing its list of new licenses for 2017 in February.