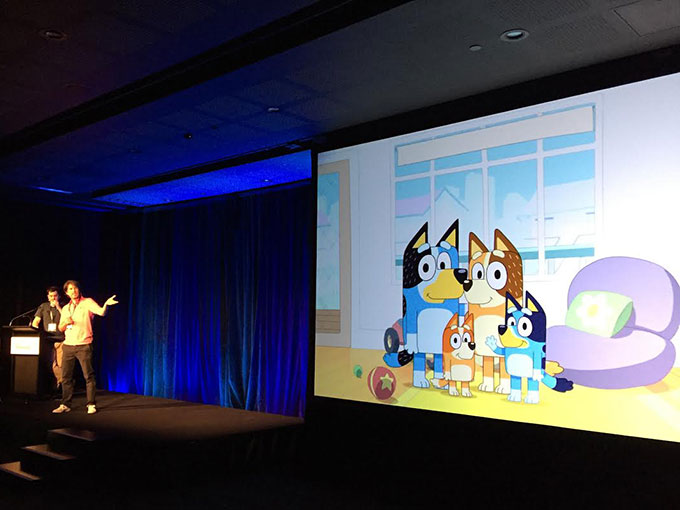 The presence of Netflix Kids, as well as the enhanced quality of toon pitches, point to the continued development of AAS, held last week in Brisbane, Australia.

Over the course of the three-day event, broadcasters, co-producers, distributors and investors from Asia Pacific and the global marketplace were introduced to a diverse group of projects spanning multiple genres and styles.

Standouts include Bluey (pictured), a 2D-animated preschool show about a family of cattle dogs from Brisbane-based Ludo Studio; Tido, a CG-animated program for eight to 12s from Malaysia’s The Commonist about an on-the-run cat who befriends a ragtag group of supernatural monsters; and Dave the Caveman, a short-form comedy series for families from Thailand’s Moon House Studio.

Other notable projects include two more from down under—BES Animation’s Cosentino starring the titular real-life Aussi magician, and Horseplay, a sports-themed preschool show from Like A Photon Creative (Balloon Barnyard).

Designed to foster global financing and co-production partnerships for kids shows in the region, AAS 2016 kicked off on Tuesday with a rousing presentation from YouTube.

The platform’s content partnerships manager Sanoop Luke got the Summit up to speed on the performance of the YouTube Kids app (it has generated more than 10 billion views to date) and its new safety features, which let parents block videos or channels from their children’s experience for the first time.

Luke also provided updates on YouTube’s investment in original content (it now funds more than 12 original series, kids and adult shows combined) and its recent deal with advertising giant Interpublic to shift US$250 million from TV ad budgets to YouTube.

Particularly relevant to AAS 2016 was YouTube’s Skip Ahead initiative with Screen Australia, which is designed to support the next generation of creators, recently awarding US$725,000 in funding to four YouTube creative teams including sisters Charli and Ashlee Kelly who head-up popular kids baking show Charli’s Crafty Kitchen.

With their portion of the funding, the sisters have partnered with Brisbane studio Like A Photon to turn their YouTube hit into an animated TV series entitled Charli & Ashlee’s Crafty Kingdom.

As Netflix continues to ramp up its kids originals pipeline and acquisitions business, Bazay’s visit marked her first appearance at AAS.

“I came to get to know some content creators who we don’t normally get to see, and this region is a really interesting, fertile ground for great ideas,” says Bazay. “I was really impressed with the calibre of the projects. Bluey is interesting because it’s coming from a creator, a dad, and it’s about his relationship with his own kids. It’s very authentic, the designs are beautiful and it felt like it came from the heart which is one of the keys to success in preschool animation.”

“Two to fives can engage with it, but it also has that brilliant parental appeal and the beautiful nuance of Peppa Pig and Charlie and Lola. It has wonderful levels of communication,” says Rose. “For emerging studios like Ludo, who pitched Strange Chores a few years ago, AAS is a fantastic opportunity. Bluey is the first preschool show they’ve done and they are genuinely looking for partners.”

Looking at other projects, Rose was also drawn to Eggy Egg! from Thailand’s The Monk Studio and Tido from Malaysia.

“Tido looked fantastic. It was perhaps a bit scary for my liking, but I loved the aesthetic. As far as Eggy Egg!, it was very funny, but as a studio, they really need to think about who their audience is,” he says.

On a broader scale, Rose notes that the gap between animation and narrative is getting smaller in the region.

“Having been to all but one of the Asian Animation Summits, there’s been a real trend for the studios to consider storytelling and narrative, which have definitely improved. In terms of the animation, it’s always been of a very high quality but, in the past, there has been a disparity between animation and narrative,” he says. “Now, all studios are considering how their IP will sit on a global platform. And with Netflix and YouTube, there are more opportunities to get your content in front of eyeballs. AAS has really embraced this.”

For AAS first-timer Joel Williams, head of programming for Disney Channel Australia and New Zealand, the Summit has provided a number of opportunities.

“I’m looking for projects that we can acquire or co-produce for Disney Channel, but I’m also looking at local programming quotas. The standout property for me has been Bluey. It’s a great title that I think we’ll pursue further. My other favorite was Dave the Caveman. Having Dave in situations that are foreign to him allows for endless storylines.”