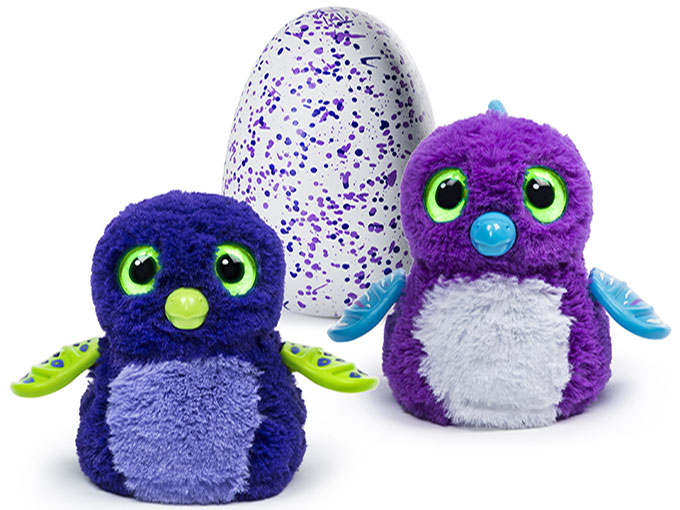 Spin Master co-CEO Ronnen Harary says the level of demand for Hatchimals only happens once every 10 years—and so far, booming sales and production output may mean things are just getting started.

Standing in lines, scouring multiple stores and spending five times the original price to acquire an item—the elements of a full-blown toy craze are definitely in the air for Toronto, Canada-based Spin Master. The company’s Hatchimals line is causing retail flurries six weeks before Christmas in the hopes of living up to predictions of it being the toy of 2016.

Sales of Hatchimals, the toy eggs that hatch to reveal their inner colorful animals to their caretakers, have already boosted Spin Master’s bottom line, helping the company’s Q3 revenue rise by 22.8% to US$475 million. And with the toy being named on a number of holiday must-have lists, Spin Master is upping production in an effort to meet expectations.

“The demand has definitely caught us by surprise, and the team is working very hard to keep up with it,” says Ronnen Harary, co-CEO and co-founder of Spin Master. “We’ve been dealing with the factories to increase production, expedite shipments and now we’re actually air-freighting products into stores. So we’re trying as best as we possibly can to try and meet production demand in order to make sure that all kids are going to be happy come Christmas time.”

The speed in which Hatchimals are flying into stores somewhat contradicts the nature of the toy, which is all about patience. Hatchimals are an egg that you must spend time with in order to see the toy come alive. Eventually, one-on-one time translates into hatching, wherein the bird will use its beak to break through the shell. Then there are three more stages of growth for the bird, and you can also tell its mood based on its changing eye color. Batteries already come with the product, so any child just has to open the box to get started.

The toy took the team two years to develop, with a year of spent just on the mechanics of the shell.

“The egg, it’s magical material…we’ve actually got a patent pending on the material itself,” says Harary. “It’s amazing technology for a young child–they don’t necessarily see it, and that enables it to bring out the magic.”

Although Harary and his team remain tight-lipped on actual Hatchimals toy sales, they do know it’s been very popular. And they know a toy with this amount of buzz doesn’t come around very often. The Rubik’s Cube in 1980, Cabbage Patch dolls in 1983 and Frozen merchandise in 2014 were all sensations. But there’s something about Hatchimals in particular that makes them so special, says Harary.

“It’s the whole concept of bringing something to life, and the magic of birthing and how realistic it is,” he says. “The fact that it can actually peck through this egg… and the fact that it’s actually rotating inside, it’s just so realistic.”

Other toys that Spin Master sells, including a Helix Race Drone, Paw Patrol merchandise and PowerPuff Girls playthings, are selling well, but not as well as Hatchimals.

“Some stuff really goes, and some stuff doesn’t go,” says Harary. “But something like this [Hatchimals] happens once every 10 years.”

But he hopes the love for his company’s biggest seller will translate into sales of other toys. “Young kids shop based on the brand named, not the company,” Harary admits. “But I know that a lot of parents do, so it should translate to some goodwill among the parents. It would be a nice halo effect to get.”

Something that also sets this product apart from the pack is that there are no virtual components, which Harary says was a risk, but one he felt was imperative to take.

“We wanted kids to really connect and stay connected to the toy,” says Harary. “I’ve seen young kids, like my niece, who spent a good 45 minutes on it. We hatched it together and she was not distracted by anything, she was so in the moment, showing us the hatch and the cracks and peaking inside.”

In terms of a web series or other digital extensions, Harary says Spin Master is going to look at everything, but nothing has been greenlit yet.

Most parents are focused on the present for Hatchimals, and that means getting it in their children’s hands on Christmas Day. Of course, other people have been seeking to capitalize on Spin Master’s success by buying the toys and jacking up  prices online. A Hatchimal now goes for at least US$250 on Amazon, rather than its US$59 SRP. Unfortunately there’s not a lot Spin Master can do about that.

“For us, the most important thing is to put out an amazing product, and we’re really proud of the team for putting out this magical innovative product,” says Harary. “Our job is to meet supplies as best as we possibly can, and that’s what we’re doing as a company.”