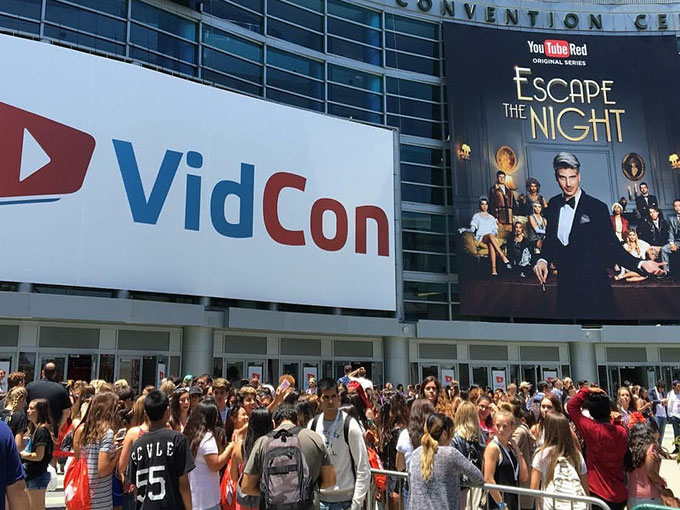 VidCon may have given Kidscreen editor Lana Castleman a jolt this past summer, but kids TV execs are staying even-keeled when it comes to competing with YouTube.

So, I attended VidCon for the first time in June. For those of you unfamiliar with the hybrid consumer/industry event, it is the annual gathering that revolves around all things YouTube. Beyond any snap judgments made about the suburban wasteland that is VidCon’s home (a.k.a. Anaheim), my reaction to witnessing the throngs of screaming tweens/teens heading into the convention center was, “Holy sh*t. If I were a kids TV programmer, I wouldn’t know how to deal with this.”

You’re probably wondering what spurred me to that conclusion. I’m pretty sure it was the sight of dozens of kids walking around, usually in groups of two or more, not talking to each other, but having seemingly meaningful interactions with their phones. It was as if their selfie stick-mounted devices were, in fact, telescopes boring into their very souls.

They were pouring out their hopes and fears to the lifeless lenses to make videos they would later share with their friends (who were right there beside them!?) via their YouTube channels. And for the first time in my life—even though I have technically qualified as an “old” for some time—I thought, “I just don’t understand this generation,” which led to my revelation.

I couldn’t wrap my head around why they preferred to talk to a phone rather than each other. I didn’t see the appeal of then watching it all played back on a YouTube channel as opposed to, you know, living it in real time. And I didn’t understand why crowds of VidCon attendees were screaming at the sight of a vlogger whose claim to fame is watching other people watch video games on camera.

Then again, as I said, I am an old. Luckily, however, I am not also a broadcaster competing with YouTube stars for the attention of this generation of kids. As it turns out, the execs in charge of that seem to be making it work.

There’s no doubt that kids ages two and up love the VOD giant. But to get a read on what I’m talking about in terms of broadcasters, check out Gary Rusak’s October 2016 feature story, “Changing channels.” He provides a great overview of how the major US kids networks are rolling with the myriad challenges faced by anyone working in this still-nascent digital space. Exploiting their presence on YouTube and creating content customized for specific platforms are only parts of their entertainment arsenal. Add to the mix an unparalleled knowledge of their audience and unerring eyes for a good story, and it means they will likely avoid holy sh*t moments of their own.