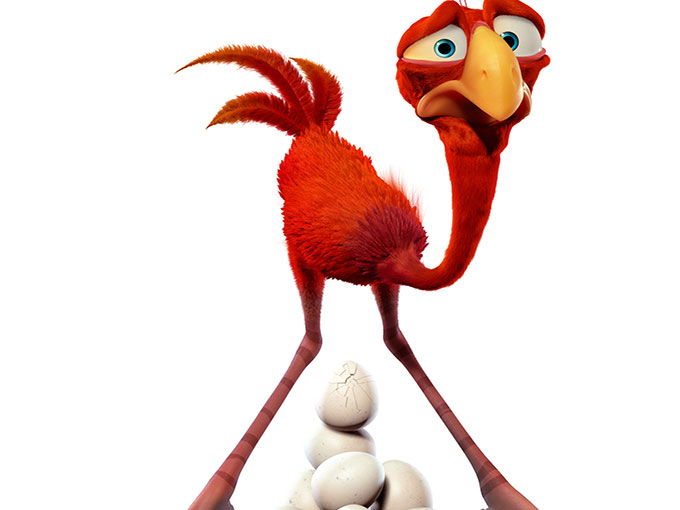 Even though they worked at the same Quebec City studio simultaneously, animation and video game industry vet Denis Doré didn’t know his future Squeeze co-founder Patrick Beaulieu until their first coffee meeting in 2011. The caffeine-charged exchange resulted in plans to build their own company that would offer services in game animation and game cinematics.

Squeeze was born less than a month later, and the company’s first contract opened the door for five new hires. With a strategy focused on creating high-quality CGI character animation, Squeeze purposely took the time to grow its service business around video game and movie trailers, TV commercials and short- and feature-length films—all in effort to gain industry trust and knowledge.

In 2014, however, things kicked into high gear when the Canadian studio’s first original series, 52 x one-minute CGI-animated slapstick comedy Cracké, made its MIP debut. Fast-forward to 2016, and the non-verbal show about an anxious ostrich dad named Ed—who will go to any length to protect his eight unhatched babies—has sold to Cartoon Network and Boomerang in Latin America and the Caribbean, as well as to Disney EMEA, Nickelodeon (Australia and New Zealand), Canal+ (France), Teletoon (Canada) and Cartoon Network channels in Germany, the UK, Italy and Portugal.

Doré was told on multiple occasions that broadcasters wouldn’t buy a one-minute series, but he stuck to his guns. “We came from commercials, so this was what we wanted to do,” he says. “As it turned out, a lot of people need one-minute, non-verbal series that can travel the world.”

Once Teletoon gave Squeeze the greenlight to jump into full production, other supporters came on-board, including the Canada Media Fund and the Bell Fund. And the prodco then accessed the Québec Refundable Tax Credit for Film and Television Production (managed by SODEC) and the Canadian Film or Video Production Tax Credit (CPTC) – CAVCO.

Doré says one of the studio’s biggest challenges was having to produce 52 minutes of animation in a short period of time. “Even though it’s a one-minute series, we had never done one before. We also had to find a common language in terms of idea and concept in working closely with Teletoon,” he says.

The series debuted in March on Turner and Nick, followed by a June bow on Disney. Squeeze is now preparing for the show’s Canadian launch on Teletoon this month. The company is also in active negotiations to sign a US broadcaster.

“Right now it’s all about the awareness of the show, because we want Cracké to grow into a big IP across TV, digital and CP,” says Doré.

In line with its multiplatform strategy, Cracké will also inspire a free endless runner mobile game app. Developed in partnership with fellow Quebec-based media company Cortex, the app is expected to launch in tandem with the TV series’ Canadian premiere.

Also in the works is a free Netflix-like app housed on a Unity game engine called StoryCube. The proprietary tech, also developed in partnership with Cortex, is expected to launch next year.

“StoryCube users will be able to download every episode of Cracké as they become available in specific countries. And beyond video, animated comics and illustrated books will also be featured,” says Doré. “Grabbing a minute is hard sometimes with TV, so we wanted to make sure people could have another touch point,” Doré says. “We also eventually hope to put other IPs from third parties in the app.”

Looking ahead, Squeeze is currently developing a second season of Cracké, but this time in a longer, seven-minute episode format.